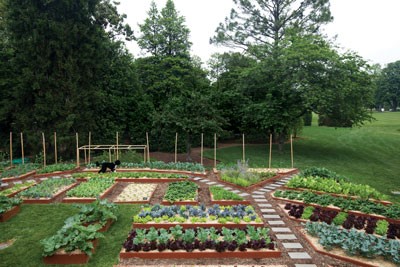 “The South Lawn vegetables, fruits, and herbs inspire people across the country to eat locally, mindfully, and healthfully,” said George Ball, chairman and CEO of the W. Atlee Burpee Company. “Burpee is proud to continue our long history of inspiring gardeners by supporting the White House Kitchen Garden in one of America’s treasured national parks.”

First planted by First Lady Michelle Obama in 2009, the garden is maintained by the National Park Service as it is located in President’s Park (White House), one of America’s more than 400 national parks.

“America’s national parks are a collection of unique elements and experiences. The future of these special places is dependent on vibrant and robust public private partnerships,” said Will Shafroth, president of the National Park Foundation. “Through their generous support, the Burpee Foundation and the W. Atlee Burpee Company gifts as sole supporters are ensuring that the White House Kitchen Garden will continue to demonstrate the importance of getting outside to garden and be healthy as we enter the second century of the National Park Service.”

The First Lady planted the White House Kitchen Garden to help start a national conversation about the health and well-being of our children and our nation. It eventually led to the Let’s Move! Initiative in 2010 which is dedicated to helping kids and families lead healthier lives. Gardens, specifically the White House Kitchen Garden, are meant to bring people together, give everyone a chance to work with and learn from each other, and form a stronger, more connected community.

ABOUT THE NATIONAL PARK FOUNDATION