You have just caught a swarm using the swarm bucket, but now it seems as though there are more bees sitting on the lid of the bucket than are inside. How can you get them in the bucket without releasing the bees already in the bucket?

An easy solution is a variation of the swarm bucket lid that employs a funnel or cone to trap the bees. The funnel acts as a one way opening. It makes use of the bee’s inability to recognize a small opening that is not on a flat surface as an exit. The same concept (cone entrances) is used in many bee related devices such as pollen traps and escape boards. 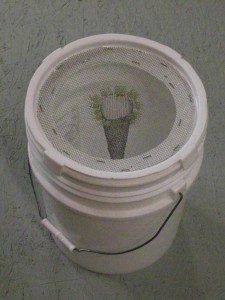 Directions on how to build a swarm bucket are available at http://www.thebeeshed.com/publications.html. “Build a Swarm Bucket” was originally published in Bee Culture May 2011 on page 55.

Construction
What we’ll build is a bucket that has a tight screened top with a funnel in the middle. 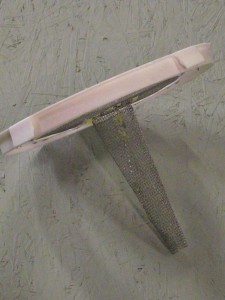 Step 3: After the funnel is complete, use a pair of tin snips to put a flange on the large end of the funnel. Then using the top of the cone (the inside edge of the flange) as a guide cut a hole in the center of the top you made in step 1. Slip the funnel into the hole and use epoxy or silicone glue to hold it in place.

Step 4: Allow the epoxy or the silicone sealant to dry and you have a very useful piece of equipment. 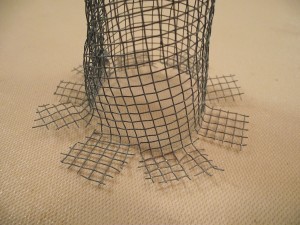 Usage
After initially getting the swarm into the swarm bucket, put this top on the bucket. Then set the bucket near where the swarm was originally caught and wait. Assuming you caught the queen, eventually all the bees in the swarm will try to get close to her. They’ll walk down through the large end of the funnel and be unable to exit the bucket. 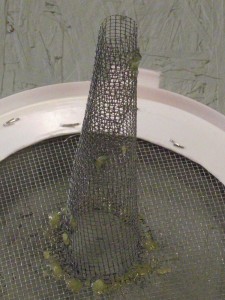 Thoughts
Have more than one swarm bucket handy. In the past three years I have come to rely on this device for most of the swarms I have caught. Twice during the peak swarming season I have been called out on a second swarm retrieval before I was able to hive the first swarm. On a third occasion the swarm was so big and difficult to get that I missed the queen on the first try. The bees immediately started to return to the original swarm location. I put the lid on this first bucket and used a second bucket to get the queen and the remainder of the swarm.

This device is cheap, easy to make and works fantastically. 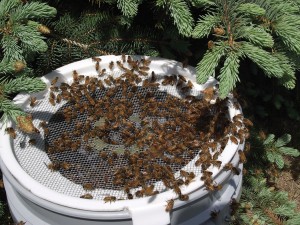 Get a copy of Ed Simon’s book Bee Equipment Essentials with detailed drawings, construction hints and how-to-use instructions for dozens of beekeeping tools and equipment from www.wicwas.com. Ed can be contacted through Ed@TheBeeShed.com. Now online are all of Ed’s Bee Culture & BBKA magazine articles. They can be accessed through The Bee Shed website at http://www.thebeeshed.com/publications.html.