Hey look! I see some beehives.

While traveling, my much younger family and I never watched for cows – much less counted them. We looked for beehives. It could not be just a kid shouting, I see hives! The sighting had to be confirmed by someone else in the car. Depending on how frustrated the parents were with three energetic young girls confined in a packed car, the reward for the confirmed sighting would range from $1.00 – $5.00. At the $5.00 mark, parents were obviously tired and stressed.

As a quick note, this beehive-sighting game does not work with my grandchildren. The game simply is not needed. They will stay totally glued to any electronic device. (In my own way, I have the same problem.) I suppose that change is sad, but my daughters clearly remember the rules of the game.

True. It is not all that often that beehives were sighted, but you would be surprised at how often we would sight things that looked much like beehives, but in fact, were not. These “almost hives” spurred discussion. If possible, I photographed them anyway – just because these things looked like bee hives. That results in an odd collection of photos. 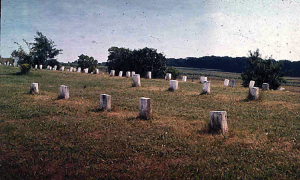 Scratched and abused old photo. From afar, I thought this was a large beeyard. I climbed fences and struggled through fields of growing crops to determine that it was a cemetery. I photographed it anyway. This photo is rarely used.

However, this really was a beehive in a cemetery. Though I snapped the photo, I don’t know the story behind the “Cemetery Hive.”

Okay, where is this going?

As have you, I have never missed the opportunity to take a photo of a bee yard – any beeyard. I have acquired such photos all of my career. As do you, I now have hundreds of photos of static apiary shots – many of which have never been used – and probably never will be – but you just never know. So – snap. Some of these pics have a story. I hope it is okay with you if I bring a sample of these old and new beeyards for your review. Some photos are battered and low quality.

I’ve never used lantern slides in the correct way. I don’t have the proper antique equipment. They were mostly large glass slides that were about four inches squared. Due to depth of the glass, they are hard to reproduce with common copiers or to reshoot. I know it can be done, but I don’t have enough of these antiques to acquire the ability and the equipment. 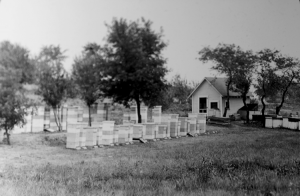 Unfortunately, in the photos that I am presenting, I can see more than you. The boxes to the far right, near the building, appear to be larger hive designs or possibly out shells for use during Winter. They are under something indiscernible – maybe felt paper.

Deeps are the majority of the equipment. The colonies to the rear are much taller. Some are as high as eight to 10 hive bodies. There is a raised walkway from the apiary house to the end of the colony rows. One of the aspects that I like about these old photos is that the grass is not mowed. No herbicides and no needless mowing. It was a time when tall, unkempt grass had not yet become sinful. Due to other labeled photos that I have, I suspect that these are Iowa State University beehives.

I enjoy doing forensic analysis on these old photos. Firstly, note the beekeeper to lower left. He is wearing an Alexander veil. This type of veil was a cylinder of metal screen that would bend, crimp and rust. But when new, they were so-so veils. Upon storing, one would roll the veil into a tight cylinder for packing away. It’s difficult to see, but right in the middle of the photo is a simple smoker – probably of A.I. Root manufacture.

This is an early commercial beeyard – not a hobby operation. The beekeeper is fully suited. I can’t explain why he is so far from his smoker. His left arm is on an A.I. Root Excelsior outer cover. It was a utilitarian cover made of five parts – two roof board, two end slats and one ridge slat. To allow for wood expansion, the two top boards did not touch each other in the covered center; hence the center board. On the hive cover next to that hive, where you can see the cover characteristics better, you can just discern that the simple cover top boards are slanted to the edge to facilitate rainwater dripping from the edge. These top boards were dadoed into the end piece – not butt jointed.  Since the hive in question is wildly unleveled, that feature is lost. 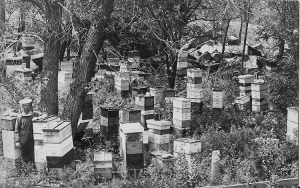 Though I fail to see much use for it in the crowded, rocky terrain, there is a utility cart just behind the large pair of Cottonwood trees. Only one wheel shows. The bees in the yard are primarily producing comb honey – probably basswood section honey.

This photo always reminds me of how much people and their fears have changed. Today’s fans would go goofy on game day if bees were still there. The stadium is much, much larger now and all the space you see between the hives and the stadium are parking lots and access roads. Even so, many years ago, I showed OSU President Gordon Gee this photo and whimsically asked if I could put bees there again. He immediately responded, “Absolutely not!” also whimsically but also very truthfully. 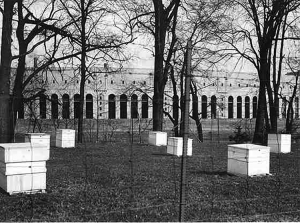 The Ohio State University apiary circa 1930.

The hive to the front immediate left is an insulated Buckeye Hive, manufactured by the A.I. Root Company. That is how I estimated the date of this photo. Due to an insulating chaff box just beneath the outer cover, the outer cover sat tall. I am surprised to see metal fence stakes used rather than wooden posts. 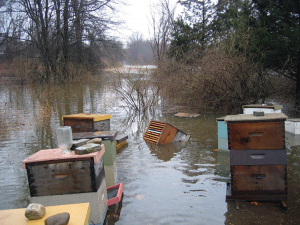 This was normally a good, honey producing yard.
Then this . . . (Jones photo)

Of course, this yard had never flooded before. The main waterway is in the far distance. Yard disasters don’t always have to be flooding. In other yards, wildfires, falling trees, or vandalism may be the traumatic issue. Occasionally, bad things happen in good apiaries.

These beautiful colonies encountered a strong nectar flow. The colonies belonged to a good beekeeper who was on the job supering and maintaining colony health. Clearly, at some point, the hive stand became overloaded.  The operation was recovered, but there was a setback period to get the bees resettled. 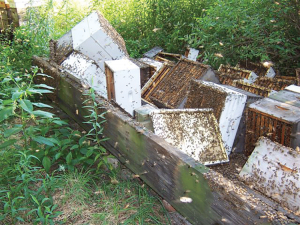 The owner of these colonies developed Alzheimer’s disease. Having been a vibrant, career military officer, his rapidly advancing condition was unexpected by him and his family. During this stressful time, his bees were increasingly neglected until they were finally essentially forgotten. 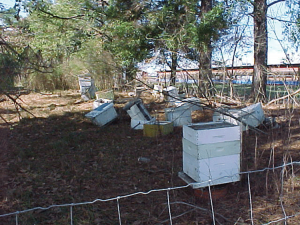 Ultimately, the family asked my beekeeper Dad and brother to clear the mess and to organize the remaining equipment for selling. Soon afterwards, as Dad was accomplishing this task, the beekeeper wandered into the storage room. He was confused and frustrated. His wife and daughter were able to distract him from the area so the work could continue.  The situation was both awkward and sad.

The photo is low resolution and has never been used. I doubt that it will ever be used again.  Sometimes bad things happen to both people and to bees. 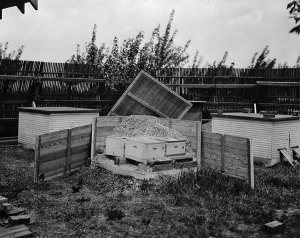 Some serious Winter preparation sometime in the 1930s.
Probably in Iowa.

I have used this photo in earlier articles to show the wintering preparation that beekeepers used at one time. None of that kind of thing now for us.  It’s too much work. (Hum. 40% winter kills are average now. Hum.  I wonder?) 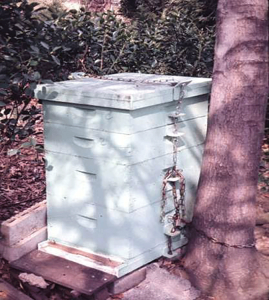 Was this setup to prevent bee robbers or people robbers? (grins) Actually, the beekeeper was having problems with someone taking honey frames from his hive but otherwise, there was no damage – just missing frames. 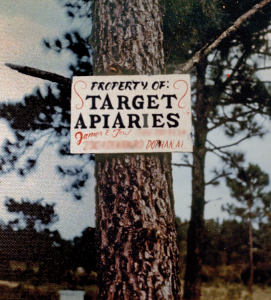 I had four of these signs hand-lettered to identify my first apiaries. I thought “Target” was a great name for my little business.   (“I was right on Target!” or some such.) My problem is that hunters felt that I had posted these signs for their range practice. I am so lucky that a single one survived and that I still have it. The other three were shot to oblivion. I would argue that my remaining old sign is commercial art. Each sign was slightly different. (This poor-quality picture was derived from a low-quality paper photo.  Sorry.) 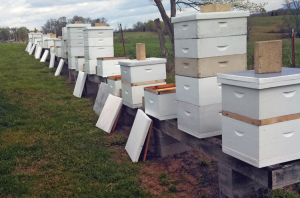 A modern yard tends to be neater and better organized. Most apiaries are easily accessible with trucks and loading equipment.  Packages are about to be installed in this equipment. In the far background, along the fence row, another yard has been set up.  This is a nice apiary location. 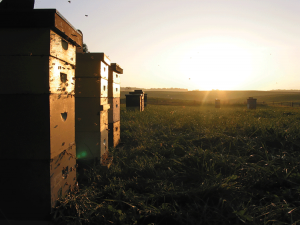 It’s not always about honey crops, Varroa, pollination
or whatever.

This the dawn of a new day in the 1980s. It’s not always about bees as work animals. Sometimes it about bees and beekeepers sharing the same space at the same time. In this photo, there’s no smelly smokers and no sticky honey loads. There is just a quiet moment when the keeper can reflect while the bees ignore you.

I suppose that this is a Zen moment in beekeeping. I have spoken to a few beekeepers who have experienced extreme traumas in life. These quiet periods were why they kept bees – not honey or pollination. Calming and quietness are good thoughts in which to end this photo article. Thanks for looking at a few (of the many) rarely used photos that you and I have. I enjoyed reflecting.

Does anyone know why there are so many comb honey hives with a deep super on top of the section supers?  I have seen that in other old photos. The top deep appears to be separated by a wooden rim. That rim could be a hint for any number of other devices.  (Inner cover, escape board, queen excluder or some kind of feeder bottom.)  I don’t know why these top deeps keep turning up on top of section supers.

by Tom Davidson Okay, fine, call me nutbag-crazy. But I’m here to tell you that tanging does, indeed work. It’s not just for breakfast…