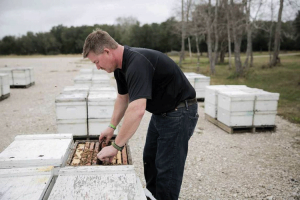 n the past year or so, I’ve spent a bit of time with Randy Verhoek. Based on my area of the bee culture, I don’t know the bigger names in commercial beekeeping, so I wasn’t as familiar with Randy as perhaps I should have been upon meeting him. After getting to know his history a bit, I felt like he was someone that maybe you guys should know better too. He is doing a lot of work to assist in creating healthier bees and habitats, and lends his own hives for research purposes. Some of you may recognize him as the past President of the American Honey Producers Association, or perhaps you have met him recently with his support of The Bee & Butterfly Habitat Fund. Either way, here’s a close-up look at Randy and his operation with the questions I had that weren’t too nosy to answer (because some of them were).

Randy is a South Dakota native, with his wife Roberta started keeping bees in 1990 and Harvest Honey was formed when an opportunity arose to purchase 750 beehives from Roberta’s grandfather in North Central Kansas and be mentored from his 60 years of experience. By 1993, the operation was expanded to 1,500 hives and also began to move bees to central California for almond pollination. 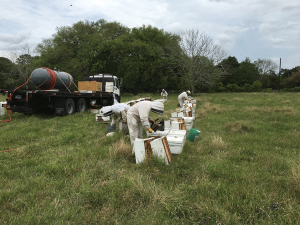 In 1997, the operation was running 4,000 hives due to an increased demand for bees for pollination. This same year, the business started a transition to move the operation to Bismarck, ND – finishing the move in 1998.

In 2003 with a further need of expansion, a separate business founded as IntegriBees LLC was formed with the purchase of a bee operation in Danbury, TX. The Danbury operation is now the base operation for raising queens and bees for Texas and North Dakota. Texas also serves as a wintering site for the bees until they are sent to California for almond pollination. The two operations currently operate 10,000 colonies producing honey in Texas and North Dakota with 11 full time and 24 seasonal employees.

Randy served many years on the executive board of the AHPA and is the immediate past President of the American Honey Producers Association. He also served on the board of directors of the National Honey Bee Advisory Board. Randy is also a member of the Honey Bee Health Coalition as a representative for the A.H.P.A. Randy has been serving on the task force for the National Pollinator Protection Plans. He is also the secretary for the Brazoria/Galveston County Farm Bureau and is the Honey Commodity Chairperson for the Texas Farm Bureau. He has been honored to serve the agriculture community with a desire to bring all of the many stakeholders together to work out solutions for long term sustainability.

When Randy is able to take time off from his busy schedule he enjoys muscle cars, especially his 69 Corvette convertible. He also enjoys going to the NHRA drag races, car shows, pheasant hunting and spending time with family in South Dakota. Randy has two daughters Rochelle and Rebekah. 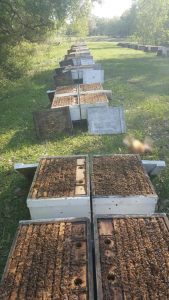 JL: How did you get into commercial honey bee services?

RV: When I first got into the bee business, it was for honey production only. Honey prices were very low and I soon found out we could not produce enough honey to make a profit. So we looked at pollinating almonds as another revenue stream with the bees.

JL: How do you choose your contracts?

RV: We first went through almond brokers until a chance meeting with an almond broker seeking bees for an expansion in his almond acreage.

JL: What made you get into the bee business?

RV: I would help my wife’s family out on holidays upon occasion and the bees were fascinating to me. The bee business also seemed like a good opportunity to work outside with different seasons. It was also something that we could do as a family.

JL: How much honey do you produce a year? How much is specifically canola or from North Dakota?

RV: We produce around 1.5 million lbs. per year on average between the two outfits. ND used to produce that by itself but due to changing farming practices, different sunflower hybrids that don’t produce nectar and overcrowding of bees into the state production has been reduced. About 25% is Canola honey. 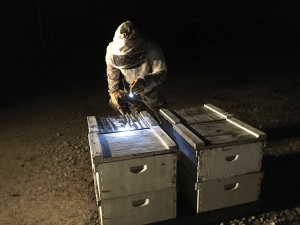 JL:  When you pollinate almonds, do you haul them out yourself or do you hire people to haul them? What does your preparation consist of (like fumigation of pallets, having how many frames of brood per frame, how many do you take, how long does it take you to prepare hives, etc)?

RV: We hire all of our trucking out with a SD company that specializes in hauling bees. They are literally an extension of our operation. They have all of their own nets and equipment. Their drivers have their own bee suits. They literally take a load off of our mind when it comes to transportation. For shipping from Texas to California, we have extra pallets that we power wash and switch out before shipping. We also carefully inspect every colony for dirt, debris, especially ants and weeds, and make sure every colony is absolutely clean before loading. We carefully inspect each pallet again as they are being loaded.

JL: Do you do any other pollination besides almonds?

RV: We have dabbled with apples in the past but found out for our operation in was not a good fit.  Where do your bees go through the year? Our bees spend most of the year South of Houston where they winter. We ship them to California to pollinate almonds just prior to bloom and we truck them back to TX immediately following petal drop. We then ship them to Bismarck, ND starting around the 20th of May and again truck them back to Texas around the 15th of October.

JL: Have you ever sold pollen?

JL: What’s the best or worst year you’ve had for honey production by weight/volume?

RV: This year was the worst as it was a cool wet spring in TX and a extreme drought in Central ND.

JL: What do you do for hive health as far as disease and Varroa treatment?

RV: We feed a lot of pollen supplements in the fall and winter as well as feed medicated with essential oils. We also feed probiotics and drench with products such as Nozevit complete. I still believe Varroa is our enemy number one and it is very, very important to keep the mite counts at less than three mites per 100 bees at all times. It is mind boggling how fast these little predators can multiply.

JL: How many queens do you produce a year?

RV: We raise 5,000 queens per year and all of the rest are purchased from good reputable queen breeders whom we have good relationships with.

JL: Have your overwintering management decisions changed after some of the research projects that involved your bees? (This question was based off of a presentation by Gloria DeGrandi-Hoffman at NABC in January this year, where she used some of Randy’s bees and they overwintered in a cold storage facility with great success)

RV: I have always been intrigued with research concerning the bees. So yes, I have changed overwintering management strategies based on solid research.

JL: How do you feel about the pesticide research being done for registration? (This question was totally biased since it’s what I do for a living)

RV: Being involved with some pesticide registration research trials, I am quite amazed to what stringent testing is done for new pesticides. I really believe that the biggest risk to the bees come when labels are not followed and there is not enough communication between the beekeeper and the applicator. If the applicator is being responsible and taking their job seriously, they will communicate with the beekeepers in the area.

JL: Tell me about your work with The Bee & Butterfly Habitat Fund/Pheasants Forever.

RV: I really like the concept of the Bee & Butterfly Fund. I am personally involved with this project as it is another way for beekeepers and growers/farmers to work together and understand the challenges each one faces in remaining profitable while maintaining sustainability. There are ways where beekeepers and farmers can work together in a manner where one doesn’t extrapolate their costs on to the other. Honey bees are an inherent benefit to the landscape and they must be protected.

JL: What is your favorite shotgun for pheasants?

RV: Believe it or not I have an old Coast to Coast 12 gauge pump that I have been using and abusing that I purchased not long after high school. It is about wore out now so I bought a Beretta automatic that has been growing on me now.

JL: What are your future plans in the honey bee spotlight?

RV: Honestly, I am at a point in my life where I am ready to step out of the spot light and get back to simply enjoying the bees and my family. I am thankful for the time I spent serving the industry and I have met many good people from all sectors of the Agriculture and scientific community.

Jessie Louque is the co-owner of Louque Agricultural Enterprises, LLC and Red Roof Agronomic Services, LLC with her husband, Bobby. Her career as a honey bee research scientist began in 2009 and has grown into a family business of bees. Their businesses run out of Francisco and Mount Airy, NC, with the help of their four kids, a lone dog who is scared of birds, two cats, and an uncountable number of chickens, guineas, turkeys, and quail. Jessie has her B.S. in Botany and her M.S. in Entomology, both from North Carolina State University. Future expansion plans include peafowl, pheasants, cows, and goats…probably.