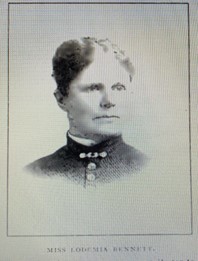 Her mother, Charlotte Parantha Humphrey Bennett, died November 23, 1857 – she was thirty-seven years old, leaving Lodemia at only twelve years of age. She had an older brother, Rollen, who was fourteen, another brother Elmer, who was thirteen, and a younger sister, Emma, who was seven years old. Her father, Daniel Bennett, born in New York in 1818, kept and cared for the children the best he could, but when the Civil War started, he had to go to war and could no longer care for them. It was not uncommon for mothers to die young, leaving the husband to care for the children, nor was it unusual for the father to send them away because he couldn’t afford to care for them. Most men were farmers, and Daniel was listed as a carpenter. Men did not seem to be cut out for this sort of work directed for the women to feed, clothe and school the children. When the Civil War called for all men to enlist, life became even more challenging for Lodemia and her siblings. They were sent to live with friends and relatives. Lodemia’s father placed an ad in the Clairidon Newspaper: “Wanted – a place for some respectable family for my daughter, eight years old until she shall become of age. Or, if preferred, I will reward any such family for keeping her for one year only Clairidon, November 23, 1860.” All the children attended school and could read and write.

Daniel served in the Civil War from 1862 to 1865. He was wounded in the left thigh in the battle near Lost Mountain. He was listed as a prisoner in the Cuyahoga County Jail around 1875 (not sure why he was there), and then remarried a woman named Anna. In the Census of 1880, Daniel’s listed as living in a Veterans home in Dayton, Ohio. In 1860, Lodemia was listed as living with a relative, Caroline W. Collins Eames. She was forty-six, and Lodemia was fourteen years old. Caroline’s children had passed away in 1847, and her husband, Marshal Hosmer Eames, had passed away in 1848. He was thirty-six. Her cousin’s two children, a brother and sister with the last name of Taylor, were about the same age as Lodemia. Caroline also had her elderly father living in the home. Caroline is listed as “keeping house.” A lady that managed a home with an elderly parent and three children without the help of servants would need to be fit and energetic and expect a lot of assistance from the children! The children are listed as attending school. 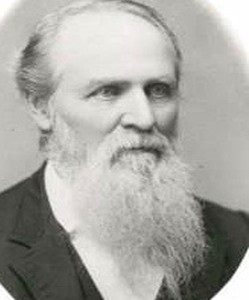 Lodemia spent the next seven years living with Caroline. Interestingly, Lodemia moved to Michigan at some point. Her younger sister Emma was married and living in Michigan. This is probably one reason why she left Ohio. I don’t know the connection between how she met and married Andrew Shults (Shultz) in Tuscola, Michigan. Andrew was married before to Lucia Sweat, who shortly died after they were married in 1867. He then married Lodemia in 1868. Andrew was sixty years old, beaten up from life and the war. Lodemia was young – only twenty-two. The marriage didn’t last as Lodemia divorced Andrew and lived with Henry Pentingill’s family in 1870. Henry had a wife and three kids. Lodemia is listed as a domestic servant. Her ex-husband Andrew died in 1872 in Tuscola, Michigan. After his death, she returned to using the name Miss Lodemia Bennett, and it appears she moved back to Ohio and lived with her cousin Harriet Bennett.

Harriet Bennett (Hattie) was born in 1837 and was twelve years older than Lodemia. Hattie married Joseph B. Hains in 1871 when she was 34 years old. They had a daughter who died at birth. He was married before and had a son Edson J. Hains. Joseph was born and lived in the house his father built. It was a 120-year-old home in which five generations had lived all or part of their lives. His father, Nathaniel Hains, was the first Methodist preacher in Ohio. He built the house at 602 Broadway Bedford in Cuyahoga, Ohio. His son Joseph B. Hains occupied the place after the Civil War, where Hattie and her cousin Lodemia learned beekeeping working together as apiarists. And this is how Lodemia’s introduction to beekeeping started. 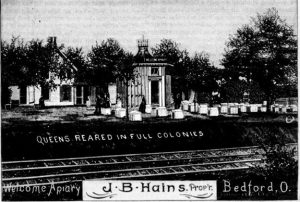 Joseph described his apiary as follows: “Welcome Apiary is located in the village of Bedford, Cuyahoga Co, Ohio, on the Cleveland and Pittsburg and Cleveland and Canton Railroads, both of which run through it, dividing it about equally. It may have been said to be established on July 4, 1844, when a fugitive swarm of bees clustered on a tree where the house apiary now stands. Being eleven years of age, I assisted in hiving and caring for them. From then, they received box hive attention – sometimes numbering a score or more, at others only two or three colonies, but never becoming entirely extinct. In the Spring of 1870, there being but three stocks, I transferred and Italianized them and commenced beekeeping on modern principles.” (April 1886 issue of Gleanings, pages 294-295.)

Joseph continued to tell his story about his apiary locations, overwintering and beekeeping supplies. He then credits the women for their accomplishments in beekeeping. “Although this article is too long, I wish to refer to one feature in our apiary. It is primarily done by women who demonstrate that women can adapt themselves to the business and become successful apiarists—Mrs. Hains and her cousin Miss Bennett, by the way, is a treasurer and secretary for the Progressive Beekeepers Association in Cuyahoga, Ohio. Both women have control of the Queen nursery and other work departments.” (April 1886 issue of Gleanings, pages 294-295.) 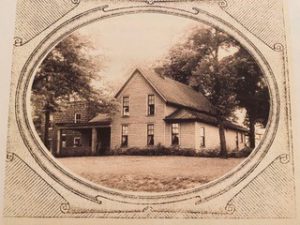 The two cousins removed the small and medium queen cells because they believed only the perfect cells deserved the title of royalty. Some beekeepers found this wasteful. In Gleanings in Bee Culture, A. I. Root described Lodemia as “Skillful queen breeder for the A. I. Root Co. and for Mr. Hains as a sample of what she could or did do, she once grafted forty-eight Doolittle cell cups on the frame. They were all accepted without a miss, and everyone hatched a queen. This breaks the record, as far as I know. She was also a successful honey producer who occupied a prominent position in our State Beekeeper Association meetings. She was twice elected secretary for the Ohio State Beekeepers Association and was secretary of the old defunct organization at the time of her death.”

Lodemia’s writings can be found in the American Bee Journal and Gleanings in Bee Culture from 1886-1893. She shortened her name to Dema Bennett instead of Lodemia Bennett.

The North American Beekeepers Association met on October 2, 1888 at the Statehouse in Columbus, Ohio. Dema Bennett was voted in as a life member. Thirteen ladies were life members, and the organization had thirty-six male members. Lodemia died in 1903 at age fifty-six. She never remarried or had children. She devoted her time to bees and beekeeping organizations. She was a religious woman who was part of the temperance movement. Lodemia’s journey worked out pretty well, considering her hardships. Lodemia is buried in the Bedford, Ohio Cemetery. Her name is listed on the same headstone as Joseph B. Hains 1904, Hattie Hains 1914, and Lodemia Bennett 1903. Lodemia made a mark on bee culture and proved to men and women that women could be good business partners and excellent beekeepers!