Varroa bombs. Let’s think about that. 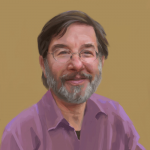 It is the nightmare scenario of every beekeeper. Varroa mite populations build up in colonies to such detrimental levels that it causes the health of the bees to decline dramatically. Varroa laden drones drift from the infected hive to other colonies nearby. Meanwhile there are not enough guard bees to defend the entrance of the Varroa weakened hive causing it to be robbed out by neighboring colonies. Mites then hitch a ride from the doomed hive to new colonies in the area further weakening bee’s immune systems and vectoring diseases in the process. Perhaps due to the subliminal effect of America’s never-ending war on terror, this situation has been called the varroa bomb.

A particular segment of the beekeeping community has consistently been singled out and accused of perpetuating the Varroa bomb phenomenon – those that don’t treat for Varroa, known as treatment-free beekeepers. These people have been denounced, called bad beekeepers and much worse by angry beekeepers who blame the mite bomb for their colony losses. At first glance this line of thought makes sense, but upon closer inspection there are holes in this argument that suggest that, at least in some cases, the varroa bomb is a dud.

First of all the above scenario assumes that the treatment-free beekeeper is either ignoring the mite loads in their colonies, or is a hands-off beekeeper intent on the idea of letting evolution play out. The idea is that colonies that are susceptible will die off leaving the stronger ones that exhibit some level of resistance to carry on. Given the genetic diversity that nature helps to create every time a queen bee mates on the wing, the chances of keeping resistant bees resistant, let alone getting bees to develop resistance in the first place with open mating, is a long shot at best.

Despite the often misguided assumptions of many treatment-free beekeepers, finding them at fault for creating mite bombs is not necessarily valid. As I have written in the book, Natural Beekeeping: Organic Approaches to Modern Apiculture, 2nd Edition, just because a beekeeper does not introduce a substance of some kind into their hives to control mites does not necessarily mean that they are not taking steps to keep mites in check. Screened bottom boards, the culling of capped drone brood, regular comb rotations and brood breaks all can help a colony to overcome the impacts of varroa (especially when all four are combined) without the need for chemical treatments of either the hard or soft variety. 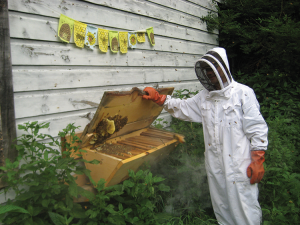 Hive designs that do not allow the beekeeper to easily add more room when needed such as the top bar hive, limit the size of the brood nest which can lead to increased swarming. The break in the brood cycle caused by swarming has a detrimental impact on varroa mite populations. Russian and Africanized bees are more likely to swarm than other races of honey bee and this is part of the reason these strains of bee exhibit varying levels of mite tolerance.

What Does Science Say?

Then there is the science that suggests that there are serious flaws to the Varroa bomb argument. This comes in the form of solid research conducted by Tom Seeley biology professor at Cornell and arguably the world’s leading expert on honey bee behavior. Dr. Seeley studied feral European honey bee colonies living in the Arnot Forest, Cornell University’s 4200-acre research forest located 15 miles from Ithaca, New York.  He found that these wild hive locations were not simply being reoccupied by swarms from managed colonies each year, but were able to survive Varroa mite infestation without any treatments being applied by beekeepers. (Seeley 2015a) Seeley also co-authored research that indicates small nesting cavities and a high frequency of swarming contribute to a feral colony’s ability to persist in spite of the mite’s presence. (Loftus 2016) Since a significant number of treatment-free beekeepers are relatively inexperienced at preventing swarming and/or are using top bar hives that naturally limit the size of the brood nest cavity, it is likely that these treatment-free bees are able to benefit from some of the same hive conditions as the feral colonies in the Arnot Forest.

Additional research indicates that honey bee colonies that are widely spaced across the landscape (such as those found in the Arnot Forest or the single colony kept by a backyard beekeeper) are less likely to experience drifting or robbing to and from neighboring bees, compared to colonies kept in crowded apiaries. (Nolan 2016, Seeley 2015b)

Either the solitary hive in the backyard is able to naturally suppress its mite levels and resist drifting of bees that may carry mites and pathogens due to its relative isolation, restricted cavity (in the case of the top bar hive), and propensity to swarm, or they are varroa magnets that end up collapsing and spreading mites and diseases to all the other hives in the area – we can’t have it both ways. 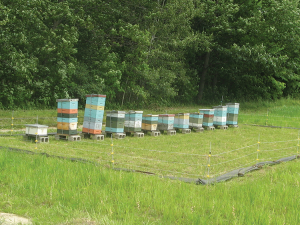 Scientific evidence indicates that when colonies are crowded together in a single apiary they are much more likely to share mites and diseases than when colonies are isolated and spread out over the landscape.

Admittedly, not all treatment-free beekeepers have a single hive or keep all their hives isolated and separate from others. I have been conducting a study comparing varroa treated colonies to colonies that have no mite control whatsoever. I started the study with 30 colonies that have received Varroa control and 15 colonies located about ¾ of a mile away in which Varroa are not controlled at all. This situation should create the perfect Varroa bomb scenario. Although colony survival after two Summers and one Winter are statistically similar in both groups, what is different is the cause of colony death in each beeyard. While some of the bees in the non-treated group failed during the warm active season, most died during the cold season after going into Winter with very high mite loads. The group in which mites were controlled and Varroa populations were low going into Winter almost all survived Winter and died primarily during the Spring, Summer and Fall from queen issues. This is not the kind of result we would expect to see if the Varroa bomb theory holds. My experience suggests that if northern climate beekeepers that are on top of Varroa and treat for mites in early September so mite levels are low going into Winter, so-called Varroa bombs are a non-issue.

Another hole in the Varroa bomb theory is that in northern climates when colonies die out during Winter from mites, the intense cold and lack of flying weather ensures that the mites in the infested hive will be dead by the time other colonies come around and start robbing. Therefore, the Varroa bomb issue does not apply during a significant portion of the year in colder regions and suggests that whatever harm the Varroa bomb phenomena actually creates is more of a concern in warmer climates such as those that exist in the southern United States.

Over the past seven years throughout the U.S., those who are “good neighbors” and judiciously use treatments to keep Varroa populations under control experienced average yearly losses of 33 percent. While this is a 10 percent improvement over those “irresponsible” treatment-free beekeepers that lost hives at an average rate of 43 percent (Bee Informed Partnership), it is significantly higher than what had been considered to be the normal yearly loss of between 10-20 percent in the early 2000s and the less than five percent yearly losses experienced in the 1970s before mites were found in the U.S.

The Deformed Wing Virus (DWV) is closely associated with stress from Varroa mites. As a result a common method of determining mite related losses is the presence of bees with shriveled wings caused by DWV. However, research indicating that neonicotinoid pesticides can increase DWV replication 1000 times the normal rate all of a sudden makes this way of gauging a colony’s Varroa stress level and cause of death unreliable. (Di Prisco 2013)

How many times has a beekeeper blamed a neighbor’s Varroa bomb for their colony losses when the signs of DWV were a result of neonicotinoid contamination? Or perhaps it was a failed treatment that led to high mite levels in treated hives. Depending on the treatment used, many things can go wrong including mite resistance, inappropriate temperatures during treatment, incorrect timing of treatments, old and outdated treatment materials that are no longer effective and incorrect treatment applications.

Despite all the things that mimic the Varroa bomb scenario, but not cause it, accusations are still quick to fly. I get it. It has never been as hard to keep bees alive as it is today. Average annual hive losses have reached 30-40% in most areas of the U.S. Bees treated for mites are too often dying anyway.

For those who work diligently to keep Varroa under control, the primary culprits of honey bee decline are pesticides, a destabilized climate, and loss of forage habitat due to land development and industrial agricultural practices. As a result, in many cases, the cry of the Varroa bomb comes across as horizontal or lateral violence. Lateral violence is defined as displaced violence directed at one’s peers rather than one’s adversaries. Thus, frustration and anger not able to be vented on the powerful corporations and ineffective government regulators behind most of our colony losses are instead taken out on those within the beekeeping community – the treatment-free beekeepers.

To quote from Abraham Lincoln’s famous 1858 speech, “A house divided against itself cannot stand.” We live in a time where it is more urgent than ever for beekeepers to come together and speak with one voice. While it is easier to lash out at members of the beekeeping community than deal with the corporate giants and government bureaucracy that perpetuate some of the most deadly threats to the honey bee, we would be wise to pause and think twice before doing so.

Ross will be teaching a two-day intensive, Getting Started in Organic Beekeeping class May 19 – 20, 2018 at the Metta Earth Institute in Lincoln, Vermont. For more information visit http://www.dancingbeegardens.com/events.html or call 802-349-4279.