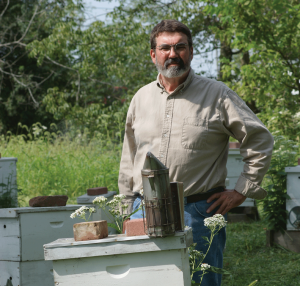 A beekeeper in Pennsylvania writes:  I have a question on storing raw honey. What is the optimum temperature to help prevent crystallization? In the past we’ve kept some in the freezer with no crystallization after six months. Do you have any ideas on reheating crystalized honey that we would keep it classified as “raw honey”.

Honey tends to crystalize in a temperature range around 57°F. Five or 10 degrees more or less can reduce the probability and rate of crystallization, but still be in the danger zone. Of course, honey from some nectar sources tends to crystallize more readily and in a wider range of temperatures than others. Canola honey is notorious in that respect, though it has a light, delicate flavor. I am always cautious when storing honey between 45° and 70°F.

I think you have already found the best solution; freezing honey before it crystalizes is the best, and likely the simplest way of dealing with the problem, as long as you have enough freezer space. Freezing prevents crystallization from occurring. A few days before the honey is needed, it can be removed and allowed to sit at room temperature until it returns to a liquid state, just as it was before you put it into the freezer. 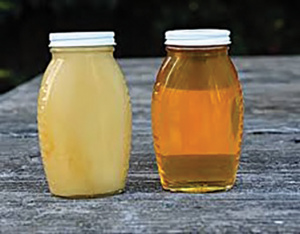 Your other question is more problematic, not because the process of de-crystallization is complicated, but because there is no accepted definition of “raw honey.”  It is a marketing term, not a legal one. “Pennsylvania honey”, for instance, is specific. Logically, it means honey harvested in Pennsylvania, made from nectar sources within the state. Raw honey, on the other hand, can be interpreted variously. A customer might assume it to mean that the product is unfiltered, whereas the beekeeper intends to convey that it is lightly processed.  The Phil Craft definition might be honey as it comes from the hive, without any processing at all – in other words, comb honey. After all, honey houses are considered food processing facilities and are regulated and inspected as such by the government in most states. By extension, if raw means unprocessed, it must also mean un-extracted.

Most definitions of raw honey include some restriction on the maximum temperature to which it can be heated during processing. Purists go so far as to argue that heat should never be applied. If you have honey to de-crystallize, that poses a problem. The only way to return it to a liquid state is to heat it enough to melt the sugar crystals – to 100°F at least. Though it’s true that excessive temperature can alter the subtle flavor of honey (that’s why most people prefer the taste of local honey to that of the commercially processed, flash heated, pressure filtered generic product available in stores), there’s no agreement on what is excessive.  This group says that honey is not raw if it is heated, that one that it loses quality over 115°F so anything less than that is OK. However, during Texas Summers, honey supers can get hot, really hot. Does that mean that honey from Texas doesn’t qualify as raw even if it’s not processed? It’s a debate I don’t want to get into. I won’t even stand behind the Phil Craft definition which I offered tongue in cheek (though there is some logic to it.)  I simply avoid using the adjective raw as applied to honey.

I can only tell you how I handle processing and labeling my own honey. I produce and sell about 800 pounds a year. After extraction, I store it in five gallon buckets, and when it’s time to bottle I move it to a double-jacketed, water heated bottling tank. I always heat it to at least 100°F to expedite the bottling process. (Warm honey flows more readily, which saves me a lot of time and eases the strain on my surgically repaired back.) If it has started to crystalize in the buckets, I turn the heat up to about 110° to 120°F for a couple of days. This de-crystalizes it, without (in my opinion) harming the flavor. I label it as “Kentucky honey” or “local honey.” When asked, I describe it as lightly processed. If a customer is looking for raw or unprocessed honey, I encourage them to buy it from someone else.

If you really want to sell your honey as raw and unheated, and to avoid the crystallization problem, one solution might be to freeze as much as you can and consider making creamed honey with the rest.  Creamed honey is a product of controlled crystallization and is the form in which most honey is consumed in some parts of the world. If you don’t already know how to make it, contact me again for suggestions