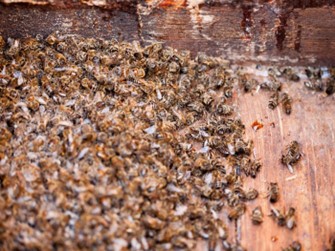 Australian authorities have been exterminating millions of bees to prevent a varroa mite outbreak. Getty Images

Tens of millions of bees are being exterminated in a desperate attempt to save Australia’s honey industry from a devastating mite plague.

Australia is the last major honey-producing nation to be hit by a varroa mite plague and is taking the measure to kill thousands of honeybee colonies to stop the mites spreading.

An eradication zone has been set up within a six-mile radius of a sighting, already implicating a significant number of bees, as authorities fight to prevent a plague that has affected the rest of the world.

Danny Le Feuvre, acting head of the Australian Honey Bee Industrial Council, told The Times that his team had already exterminated 600 hives, each containing around 30,000 bees, amounting to at least 18 million bees.

According to the website BeeAware, varroa mites – or the varroa destructor – feed and reproduce on larvae and pupae of the developing brood of bees. They affect bees’ ability to fly, gather food, and produce honey.

The mite has been blamed for the sharp reduction in the number of honey bee colonies outside Australia, and a rapid fall in the size of honey yields, The Financial Times reported.

The mite was first discovered in Australia at the port of Newcastle in late June, and honey producers have been on lockdown since.

Ana Martin, who runs Amber Drop Honey on the mid-north coast of New South Wales, told The Guardian about 40 of her hives were in the eradication zone, leaving her upset at both having to kill the bees and the economic impact.

“Between the drought, fires, floods and now varroa there seems to be a bit of bad luck for beekeepers lately,” she said.

Anna Scobie, who has 90 hives facing destruction, told the Sydney Morning Herald that Australia may have to prepare for a future of living with the mite.

“We will all just have to start to use the processes that the rest of the world has done. That may mean we are able to return to beekeeping in this area sooner because everyone else is also living with varroa mite. But if we can eradicate it, we need to try to do that as best we can,” she told the newspaper.