Honey bees forage for two distinct nutrient sources in the form of nectar (energy) and pollen (nitrogen). Fewell and Winston (1996) investigated the effect of varying energy stores on nectar and pollen foraging. No significant changes in nectar foraging in response to changes in honey storage levels within colonies were found. Individual foragers did not vary activity rates or nectar load sizes in response to changes in honey stores, and colonies did not increase nectar intake rates when honey stores within the hive were decreased. This result contrasts with pollen foraging behavior, which is extremely sensitive to colony state. They were able to show that individual foraging decisions during nectar collection and colony regulation of nectar intake are distinctly different from pollen foraging. 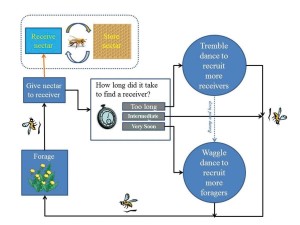 Even though each of a colony’s foragers operates with extremely limited information about the colony’s food sources, together they will generate a coherent colony level response to different food sources in which better ones are heavily exploited and poorer ones are abandoned. This is shown by a computer simulation of nectar-source selection by a colony in which foragers behave as described above. Nectar source selection by honey bee colonies is a process of natural selection among alternative nectar sources as foragers from more profitable sources “survive” (continued visiting their source) longer and “reproduce” (recruit other foragers) better than do foragers from less profitable sources. Hence this colonial decision-making is based on decentralized control. They suggest that honey bee colonies possess decentralized decision-making because it combines effectiveness with simplicity of communication and computation within a colony (Seeley et al. 1991).

Nectar is collected from flowering plants by adult worker bees. When nectar foragers return to their colonies from the field, they give their loads to nestmates near the colony entrance (i.e. receiver bees). She sometimes transfers her entire load to one bee, but other times she makes a series of unloadings to several bees (Huang and Seeley 2003). Receiver bees transfer the nectar to other nestmates who continue to pass it on until ultimately the nectar is placed in a cell on a comb somewhere in the hive (Seeley 1992). During the Spring and Summer, large quantities of nectar are collected and eventually converted into honey that is stored for later use when the plants are not blooming or weather is not suitable for foraging. Combs with just honey or nectar are found above or adjacent to the brood nest. Nectar also is placed in cells on combs where brood is reared. Placing nectar in cells of comb containing brood makes it readily available to nurse bees who feed these resources to the larvae.

Nixon and Ribbands (1952) first described the transfer of nectar from foragers to nestmates in a colony. Within 3.5 hours after releasing just six foragers that were fed 32P labeled sugar water into a colony, most of the other foragers (62%) and about a fifth of the worker population in the brood area received some of the labeled food. The rapid transfer of nectar from foragers to other nestmates indicates the numerous trophallactic contacts made among workers in a hive. The exchange of nectar among workers in some cases is for food processing and storage. However, the radioactive marker was also detected in nurse bees within four hours of releasing the labeled foragers. This suggests that some incoming nectar is disseminated to combs with brood. The transfer of incoming nectar to cells around the brood might help to coordinate the behaviors of nestmates involved in nectar collection, storage, and rearing brood.
The speed at which a successful forager transfers the honey stomach contents (unloading rate) from donor to recipient is related to the profitability offered by the recently visited food source.
Two of the main characteristics that define food source profitability are the flow of solution delivered by the feeder and the time invested by the forager feeding at the source (feeding time). Wainselboim et al. (2002) investigated which of these two variables is related to unloading rate. They individually trained donor foragers to a regulated-flow feeder that presented changes in the delivered flow of solution within a single foraging bout, while feeding time remained constant. With the range of flows used, bees attained maximum honey stomach loads in all experiments. During the subsequent trophallactic encounter with an unfed recipient hivemate, unloading rate was differentially affected by the changes in flow of solution presented during the previous foraging trip at the source, depending on whether there had been an increase or a decrease in flow rate, but did not increase the unloading rate when presented with an increase at the food source. Thus, forager honey bees seem to be able to detect variations in the delivered flow of solution, since they modulate unloading rate in relation to these changes, although decreases in food value seem to be perceptually weighted in relation to increases, independently of the time invested in the food-gathering process.

The food storer bees in a colony are the bees that collect nectar from returning foragers and store it in the honey combs. They are the age group (generally 12-18 day old bees) that is older than the nurse bees but younger than the foragers. Food storers make up approximately 20% of the colony members (Seeley 1989).

When a honey bee laden with nectar returns to the hive, she acquires information about the balance between her colony’s nectar collecting rate and its nectar processing capacity by noting the time spent searching to find a food-storer bee (who unloads and stores the forager’s nectar). By modeling this search process, and experimentally testing a basic prediction of the model, search time was found to be an accurate indicator of the ratio of the two variables, with reliability guaranteed by the rules of probability. For example, if the collecting rate increases while the process capacity remains constant, then the proportion of food storers in the unloading area decreases, hence there is an automatic increase in the expected number of bees that a forager must sample before finding a food-storer bee (Seeley and Tovey 1994).

The flow of incoming nectar into honey bee colonies was simulated by feeding a sucrose solution labeled with a novel protein (IgG) marker and then analyzing bee and colony samples using an enzyme-linked immunosorbant assay (ELISA) (DeGrandi-Hoffman and Hagler 2000). The labeled sucrose solution was quickly transported to food storage and brood combs. Within two hours, equal percentages of worker bees from food storage combs, nurse bees and nectar samples tested positive for the marker. Percentages of nurse bees and larvae testing positive also were equal within the first two hours of feeding it to a colony and these percentages increased over time. These results suggest that workers with nectar loads deposit them into cells on either food storage or brood comb with equal frequency. The labeled sucrose solution transported to the brood comb is subsequently used by nurse bees to feed larvae.

Nectar foragers upon returning to the hive, sometimes perform a mysterious behavior called the tremble dance. In performing this dance, a forager shakes her body back and forth, at the same time rotating her body axis by about 50° every second or so, all the while walking slowly across the comb. During the course of a dance, which on average lasts 30 minutes, the bee travels about the broodnest portion of the hive. It has been shown experimentally that a forager will reliably perform this dance if she visits a highly profitable nectar source but upon return to the hive experiences great difficulty finding a food-storer bee to take her nectar. This suggests that the message of the tremble dance is “I have visited a rich nectar source worthy of greater exploitation, but already we have more nectar coming into the hive than we can handle.” It also has been shown experimentally that the performance of tremble dances is followed quickly by a rise in a colony’s nectar processing capacity and by a drop in a colony’s recruitment of additional bees to nectar sources. These findings suggest that the tremble dance has multiple meanings. For bees working inside the hive, its meaning is apparently “I should switch to the task of processing nectar,” while for bees working outside the hive (gathering nectar), its meaning is apparently “I should refrain from recruiting additional foragers to my nectar source.” Hence it appears that the tremble dance functions as a mechanism for keeping a colony’s nectar processing rate matched with its nectar intake rate at times of greatly increased nectar influx. Evidently the tremble dance restores this match in part by stimulating a rise in the processing rate, and in part by inhibiting any further rise in the intake rate (Seeley 1992).

Nectar is converted into honey through a maturation process. The most prominent feature of this process is a considerable water loss (40 to 70% of nectar initial weight) that takes place in two stages: an initial evaporation carried out by the bee, which brings down water content to 40 to 50%, and the final evaporation that takes place in the honeycomb, which yields a product with 15 to 18% water (Ruiz-Argueso and Rodrigues-Navarro 1975).

Foragers add enzymes (invertase, glucose oxidase) to nectar during foraging, so some digestion is already occurring before nectar is brought back to the hive (Huang 2010). Invertase converts sucrose into two six-carbon sugars, glucose and fructose. A small amount of the glucose is attacked by the second enzyme, glucose oxidase, and gets converted into gluconic acid and hydrogen peroxide. Gluconic acid makes honey acidic, and hydrogen peroxide has germ-killing properties, both contributing to honey’s unfriendly disposition to bacteria, mold, and fungi.
Receiver bees upon receiving nectar from foragers begin to dry the nectar either on their mouthparts, by forming a large drop between the proboscis and the mandibles, or by depositing it into cells and fanning over the cells. The moisture has to be reduced to 17-18% before bees consider the honey “ripe” and then seal the cells.

While in the forager’s honey stomach, nectar does not become more concentrated (Park 1927, 1932); instead it is slightly diluted by the addition of digestive juices. The surplus water is evaporated in the hive, either during the manipulation by the mouthparts of the bee or when the nectar is in the cells. Oertel et al. (1951) initiated experiments to determine the rapidity of hydrolysis or inversion of cane sugar (sucrose) in the honey stomach of the bee and the effect of internal secretions on the concentration of the nectar or cane-sugar syrups in the honey stomach. Both rapid inversion of sucrose and dilution of honey stomach contents were observed.

Two main groups of bacteria, classified as Gluconobacter and Lactobacillus, are present in ripening honey. A third bacterial group, classified as Zymomonas, and several types of yeast are occasionally isolated. Both in natural honey and in synthetic syrup, the bacterial population decreases in the course of the ripening process. Lactobacillus and Gluconobacter disappear after minimum moisture (about 18%) is reached (Ruiz-Argueso and Rodrigues-Navarro 1975). It seems that Lactobacillus decreases more rapidly than Gluconobacter both in natural honey and in synthetic syrup. It is difficult to establish the contribution of these bacteria to the ripening process.