There are basically two types of queen cells – those made from a worker larva, and those constructed from queen cups.

Bees build three kinds of brood cells: worker, drone and queen cells. The queen cell is the largest of the three and is markedly different in several ways. They hang vertically in the hive, while the others are horizontal; it may be built between combs, and thereby interfere with bee space; the physical structure of the cell, with its mottled exterior, tapered shape, a cocoon that fills but half the cell and a cell tip that does not make contact with the cocoon, differ markedly from the ordinary brood cell. There are basically two types of queen cells; those made by enlarging a worker cell and allowing the worker larva to migrate into the enlarged portion, where she is specially fed to become a queen (emergency queen cell) and those constructed from queen cups for the express purpose of producing a new queen (swarm or supersedure queen cells). Emergency cells are built when a colony becomes queenless; swarm cells are built when a colony is about to divide (swarm) and supersedure cells are built when a colony is about to replace an old or failing queen (Morse and Hooper 1985). In each of these situations there are typical characteristics in the number and location of queen cells reared.

Emergency queen cells are usually found in the center of the brood nest. They may be scattered, but never will they be found hanging from the bottom of a frame or away from the brood nest. When an emergency cell is opened, it can be seen that it has its basis in an ordinary worker cell. Swarm and supersedure queen cells are, for the most part, found in the lower half of the nest; some will be hanging from the very bottom of the nest. In the process of superseding, bees build fewer cells than they do with swarming, but the number is variable in both cases and overlap. In the case of supersedure cells, fewer will be hanging from the bottom of the frames. Unlike all other cells in a hive, queen cells are never re-used. After the queen has emerged, the cell is usually torn down and soon no evidence of its existence remains (Morse and Hooper 1985).

Queen mandibular pheromone has been shown to effectively inhibit the rearing of new queens.  The presence of her pheromone prevents worker bees from rearing replacement queens until the supply of the pheromone either stops (the queen is removed or dies), diminishes (as in supersedure) or there is serious interference in worker bee distribution of the queen’s pheromone (as in swarming) (Caron and Connor 2013).

The effects of various dosages of queen mandibular pheromone on the inhibition of queen rearing in queenless honey bee colonies was investigated. Dosages ranged from 10-3 to 10 queen equivalents (Qeq) per day, one Qeq was the amount of pheromone in an average pair of queen mandibular glands. Both temporal and dose-dependent effects were found. The higher doses were effective at preventing queen rearing early in the experiment (days 0-6), but by day 10, when queen rearing was effectively completed, there were few effects at any doses. Approximately 1 Qeq/day was sufficient to suppress queen rearing for up to six days in colonies of 8,000-10,000 workers. Results indicate that the active components of queen’s mandibular glands exhibit dose-dependent effects on queen rearing, but there are additional requirements necessary for the suppression of queen rearing for periods longer than six days. The amount of pheromone secreted by queens and distributed by workers may be considerably greater than previously considered (Winston et al. 1990).

Adding queen mandibular pheromone into honey bee colonies earlier than 24 hours after queen loss resulted in an inhibition of queen-rearing, but not when added after four days. The number of queen cells initiated in each treatment decreased with the addition of the pheromone, although there were no effects on the number of queen cells torn down following pheromone treatment. The effect of adding the pheromone to queenless colonies given newly hatched female larvae under different regimens of queen cell provisioning and cell structure also was investigated. Only colonies in which larvae were presented in unmodified worker comb exhibited significantly lower rates of queen-rearing. Results indicate that queen mandibular pheromone inhibits the initiation of queen-rearing but not the maintenance of established cells (Melathopoulos et al. 1996).

Queen mandibular pheromone inhibits the initiation of queen rearing but not the maintenance of established cells.

Several studies have shown that the pheromone produced in the queen’s mandibular glands suppresses the rearing of new queens. Pettis et al. (1997) investigated the existence of an as-yet unidentified, brood- associated signal that acts in conjunction with the queen’s mandibular pheromone to suppress queen rearing. When they manipulated the levels of synthetic queen mandibular gland pheromone (QMP) and young brood in queenless colonies, there was a 50% reduction in the number of queen cells reared compared to colonies receiving QMP alone. In a second experiment, colonies containing eggs and young larvae but no QMP reared on average only one queen cell after 24 hours, while colonies containing older larvae reared four queen cells, suggesting that combs with younger brood were the source of the second signal. In a third experiment, they attempted to induce queen rearing in the presence of the queen by removing eggs and young larvae in colonies with healthy queens. Six of nine brood-manipulated colonies initiated queen cells, compared with only one of nine colonies receiving a sham manipulation.  The results from this experiment suggest that a decline in the brood signal initiated queen supersedure in honey bee colonies. Results from all three experiments clearly demonstrate the existence of a “fecundity” signal that acts with QMP to suppress queen rearing. 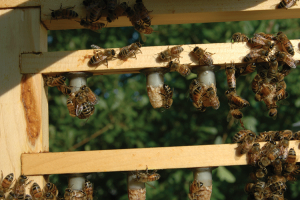 The probability that an egg in a queen cell cup will be reared as a potential queen in a honey bee colony depends on its location within the rearing colony. Eggs in cells near the center are reared more frequently than those on the edges and those near the top of the frame more frequently than those lower down. The importance of this effect is greater when bees are more selective among potential queens; when larvae are grafted into queen-cell cups acceptance is greater than when eggs are used, and there is a non-significant tendency for cells near the center to be accepted in preference to those near the edges (Visscher 1986).

Each increase of one day in the age of brood grafted decreased not only the body weight, the size of the spermatheca and the number of ovarioles of the virgin queens.

Honey bee workers are able to nurse or to destroy and thus recognize the capped queen cells containing a pupa. Fatty acid esters, especially methyl oleate, methyl palmitate and ethyl oleate were found in significant amounts on the queen pupal cuticle. Methyl oleate, the major component, along with smaller amounts of methyl linoleate and methyl linolenate, were involved in the recognition of queen cells by workers. In natural conditions of the colony, queen cells containing  a paraffin pupal lure with methyl oleate were accepted 5.9 days by workers, releasing about 1.8 queen pupa equivalents during that period, when control cells (without ester) were kept only 2.1 days.  Although these esters are non-specific to honey bees, they are of great importance in social regulation of the honey bee colony (Le Conte et al.  1994).

When queenless honey bees rear new queens, the relative frequencies of subfamilies found in the queen and worker brood are often very different suggesting that certain subfamilies found in the queen and worker brood are often very different, further suggesting that certain subfamilies are reproductively dominant. At least two mechanisms could account for the observed differences in queen and worker broods. First, kin selection theory predicts that if honey bee workers are able to distinguish levels of relatedness, they should act nepotistically by favoring super-sisters (full sisters) over less related half-sisters during emergency queen rearing. Alternatively, selection might result in royalty alleles (An allele is an alternative form of a gene at the same site in a chromosome. Organisms typically have two alleles for a single trait one being inherited from each parent) that make their possessors more favored for rearing as queens. Documented genetically based tendencies to rear queen or worker brood might interact with either of these mechanisms. To determine which of these effects might best explain reproductive dominance,  Osborne and Oldroyd (1999) removed brood from the queenright section of one colony and offered it to the queenless section of the same colony and to three unrelated queenless colonies. They used two microsatellite loci to determine the paternity of queen and worker brood reared by these colonies. Variance in the proportions of subfamilies in queen and worker brood was greatest when the rearing bees were related to the brood. These results suggest that nepotistic interactions are more important than royalty alleles or other factors in causing reproductive dominance, but that there are complex interactions between the genotype of the nursing workers, and the genotypes of the larvae favored for rearing as queens.

Woyke, J. 1971. Correlations between the age at which honeybee brood was grafted, characteristics of the resultant queens and results of inseminations. J. Apic. Res. 10: 45-55.