Bees and beekeepers share many things including the incessant drive to find food and eat it, behavior referred to as “foraging.” Human and bee foraging has been intertwined by agriculture into a tight mutualistic relationship, the success of which depends on deep knowledge of our partners’ biology and behavior (much like certain human-human relationships!). The scientific method has been of great help here, and continues to reveal amazing details of honey bee foraging behavior. The following is a story of some recent discoveries we have made about how bees communicate with each other to coordinate colony foraging. It probably will not change the way you work your bees this afternoon, but any detail of bee behavior could someday become relevant for beekeeping practice. And I think it will appeal to the curious biologist that I know is part of every beekeeper.

Knowing it All
The remarkable ability of honey bee colonies to discover and use food sources lies at the heart of what makes them successful across the world and useful to us as beekeepers. We know much about how bees achieve these amazing feats from the science of Karl von Frisch, Martin Lindauer, Tom Seeley, and many others (see von Frisch 1967, Lindauer 1971, and Seeley 1995). We know that the collective brain behind a honey bee colony’s foraging success is the waggle dance performed by successful foragers to communicate to potential recruits the location of a profitable food source. We know that waggle dance recruitment functions within a web of communication, involving close coordination between active foragers and other task groups such as food-storage bees and unemployed forager bees. We understand this dance signal to be a language which can be decoded to convert symbolic movement into real-world distances and directions, that this language has dialects, and that it can be modified to indicate food sources that are very near or very high-quality. We know something about the way in which information is transferred from dancers to dance followers, and we understand that there are elements to food signaling beyond the dance language, such as transfer of food odors. We know more than can be nutshelled here, but do we know everything? Recent experiments by teams of students and scientists such as myself suggest a new dimension to the communication process by which honey bees recruit nestmates to food sources. The identity of this new dimension: bee body odor.

Discovering a New Smell
While I was working as a post-doctoral researcher at the USDA honey bee research lab in Tucson, Arizona, I received a visit from two honey bee biologists of the German tradition: Dr. Harald Esch of the University of Notre Dame, and Dr. Corinna Thom of the University of Arizona. We of the Tucson Lab were at the time working on the problem of queen volatile chemicals, and how these might relate to queen supercedure and Africanization of European bee colonies (Gilley et al. 2006). For this work we were refining a technique of chemical sampling called solid-phase microextraction (“SPME”) in which volatile chemicals are absorbed onto a coated fiber, separated into individual compounds by gas chromatography, and identified by mass spectroscopy. This technique is more commonly used for detecting volatiles in organic liquids such as wine or from contaminated water, but also allows for nondestructive sampling from live organisms such as bees [Figure 1]. 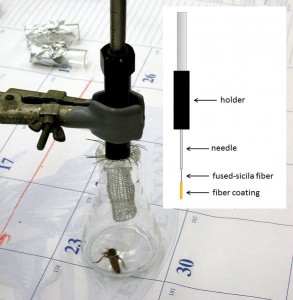 Figure 1. A live queen, in flask, is sampled for volatile compound emissions using a SPME fiber. The fiber is protected by a wire-mesh guard during sampling. Inset: diagram of a SPME fiber.

Drs. Thom and Esch were both impressed with the technique, wondering if it could be used to tap into the food-communication system on which they had both done research in the past. Some of their past work suggested that colonies could be stimulated to forage by exposure to air piped in from an actively foraging colony (Thom & Dornhaus 2004). We decided to try our luck, to see whether SPME samples we took of the air on the dance floor area of observation hives would reveal obvious chemical signals beyond the abundant odor “noise” present throughout the hive. To our scientifically tempered delight, four compounds revealed themselves in samples from the dance floor but not from other areas of the hive, nor from the dance floor at night, when foraging is shut down.

Documenting a Phenomenon
Could the compounds detected on active dance floors be chemical messages produced by forager bees? An alternative idea that would need to be addressed with evidence is that the compounds were odors from flower petals or from fresh nectar brought back to the hive by the foraging bees. To determine the source of these compounds, we marked bees arriving at an unscented food source and then took SPME samples of both marked foragers and unmarked non-foragers [Figure 2]. The outcome was that the compounds were present in samples from marked foragers but at high levels only from those marked foragers that waggle-danced. We therefore dubbed these the “waggle-dance compounds” (Thom et al. 2007). 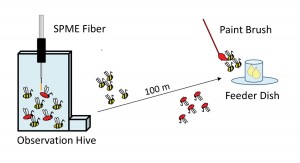 Figure 2. Experiment to determine the source of dance-floor compounds. After being trained to the feeder dish, bees arriving at the dish were marked with paint so that they could be identified when they returned to the hive. SPME samples of marked bees showed high compound levels only from waggle-dancing bees.

Now that we knew that something interesting (and undocumented) was going on, we recruited help from our chemist, Dr. Judith Hooper, who identified the waggle-dance compounds as long-chain hydrocarbons. These four hydrocarbons are known to be present on honey-bee body surfaces (Blomquist et al. 1980) and are known pheromones in other insects such as wasps (Steinmetz 2003) and flies (Howard et al. 2003).

Getting the Biology Right
Do the waggle-dance compounds function as a honey-bee foraging pheromone? Answering this would require demonstration that the dance compounds modify bee foraging behavior. Happily, most of the compounds are available for purchase commercially, so we were able to produce a mixture that mimicked natural compound levels and inject it into a hive to see if bee behavior changed as a result of exposure [Figure 3]. 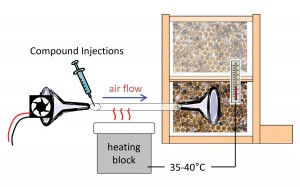 Figure 3. Experiment to determine whether dance compounds affect foraging behavior. The compound mixture was injected into heated tubing through which it was blown by a fan onto the dance-floor area of the observation hive. Heat was adjusted so outflowing air matched normal beehive temperature. Foraging behavior was measured by monitoring bee arrivals at a feeder dish.

This kind of manipulative experiment, including an unmanipulated control group for comparison, is critical in science for establishing cause-and-effect relationships. We predicted that exposure to the dance-compound mixture would boost the number of bees arriving at a food source as compared to a control substance (here the mixture’s solvent alone). Results showed that the dance compounds nearly doubled the number of bees arriving at the food source in comparison with the control [Figure 4]. This suggests that the dance compounds, released by waggle-dancing bees, function as a colony foraging stimulant (Gilley et al. 2012). 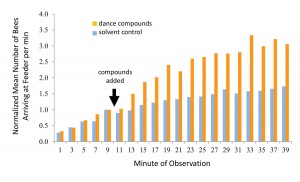 Figure 4. Results of experiment to determine whether dance compounds affect foraging behavior. Bee arrivals at the feeder dish were recorded for 10 minutes before the dance-compound mixture was injected, and for 30 minutes afterward. In half of the trials the pure solvent of the mixture was injected as a control. Each bar represents the mean number of arrivals from 15 trials, normalized among trials to account for daily fluctuations in foraging conditions. Redrawn from Gilley et al. 2012.

From Colony to Individual
How do the waggle-dance compounds affect the behavior of individual bees to produce this colony level stimulatory effect? We thought the dance compounds might attract dance followers (who are potential recruits) and/or increase each dance follower’s willingness to become a recruit (i.e., to pursue the food source being advertised by the dance). To test this, we marked a pool of forager bees for individual identification [Figure 5] so that we could record the effects of dance-compound exposure on individual behavior. 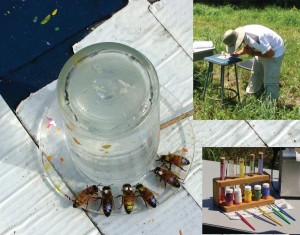 We predicted that dance-compound exposure would increase both the number of dance followers and the recruitment success of each dance, as measured from video records of the observation-hive dance floor. Data from two field seasons, however, did not support either of these predictions; there were no significant differences in the efficacy of waggle dances when bees were exposed to the dance-compound mixture (Gilley 2014). After a brief mourning period for the death of our beloved idea, we moved to the next most-likely hypothesis.

Considering Alternatives
If the waggle-dance compounds are not stimulating foraging by amplifying the message of the waggle dance to potential recruits, then who is the target recipient of the dance compounds? Well-known by those who have watched foraging bees in detail is that experienced foragers sometimes bypass dance-following altogether, instead using their “private” memory information to pinpoint former food sources (Biesmeijer & Seeley 2005, Gruter & Farina 2009). This phenomenon is known as forager reactivation.
We hypothesized that the dance compounds might reactivate foragers to visit food sources with which they had previous experience. If this hypothesis is true, then exposure to the dance compounds should still stimulate foraging flights even when the feeder is emptied to halt recruitment to the feeder via dancing. The experiment we conducted to test this was again similar to the previous experiment in set up, but now the feeder was emptied after the bees had been trained to it, and the behavioral response we measured was the number of experienced (marked) foragers arriving at the empty feeder dish. After one season of defeat at the hands of unusually wet weather, data from the second season revealed a reliable increase in feeder visits by experienced bees following dance-compound exposure (versus the solvent control; Figure 6; Gilley et al. 2012). 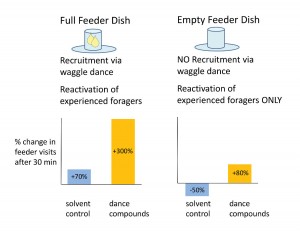 So it seems that these compounds, emitted by waggle-dancing bees, are not so much messages from the waggle dancers to their dance followers, but to other bees in the hive for whom the existence of favorable foraging conditions is relevant. In retrospect, it makes sense that these volatile chemicals, as they diffuse throughout the dance floor area, carry a general broadcast message rather than a specific targeted message.

Speaking Bee
By manipulating levels of a pheromone to provoke a behavioral response, have we communicated with the bees? Honey bees, as you know, are smart little things, but their sensory world is alien to our own prohibiting communication of the kind we share with our domesticated mammalian cousins. If the conclusions of the experiments described above are correct, then we have in these investigations tapped into the scent-dominated sensory world of honey bee society. Improved tools for communicating with our bees could enhance our relationship with them, whether your beekeeping interests are as a hobbyist, honey producer, or agriculturalist. At present, this research suggests that we would do well to consider how our management practices could affect the finely tuned olfactory environment that bees craft within their hives.

This year’s almond crop is expected to be larger than that from last year, and growers are pointing to more rain and a better…