The American Association of Stratigraphic Palynologists (AASP) recently awarded Vaughn Bryant, professor in the Department of Anthropology in the College of Liberal Arts, the AASP Medal for Scientific Excellence for his outstanding years of dedication in teaching, scientific research, and service. 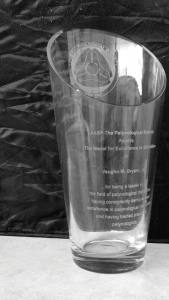 “I am overwhelmed by this great honor and for this prestigious recognition,” he said. “I only hope that I will not run out of time before finding more challenges to conquer.”

The AASP has also chosen him to receive the Outstanding Educator and Distinguished Service awards.

Bryant is one of the nation’s top experts in palynology – the study of pollen grains – and is one of two forensic palynologists in the United States.

He also started the Palynology Laboratory at Texas A&M University, which is used in a forensic capacity to track ivory poachers, identify counterfeit honey, help the federal government track down terrorists, probe the drug trade, and help investigators identify bodies.

According to Andrew Laurence, a former student of Bryant’s who is the other forensic pollen analyst in the U.S., this type of analysis is possible because each region has its own unique pollen print generated from local plants.

“Think of it,” says Laurence, in an article for The Atlantic, “as a fingerprint for a region.” 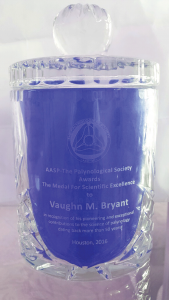 In 1971, Bryant began his career at Texas A&M, where he began building what would later become the anthropology department. What started as him teaching the subject to small groups of students garnered enough interest to become an undergraduate major and, eventually, a course of study for a graduate degree.

His efforts to create an interactive learning environment for his students combined with his groundbreaking research reinforce the college’s goals to provide a transformation learning experience for our students and conduct research that matters. His contributions to society have brought prestige – and the Department of Anthropology – to the college.

“[Bryant’s] positive influence in scientific endeavor and in mentoring generations of scientists has left an enduring impression on the discipline that is more than deserving of the Medal for Scientific Excellence,” Guy Harrington, president of AASP, said.