Williamtown beekeeper David Vial says he will lose a quarter of a million dollars in sales. (ABC Newcastle: Madeline Lewis)

New South Wales beekeepers and industry groups say emergency measures imposed to stop the spread of a deadly parasite will devastate the industry and have potentially significant knock-on effects on honey production and agriculture.

It was first detected on Wednesday in two of the six hives used to monitor biosecurity at the Port of Newcastle during a routine inspection, and in the hives of a nearby commercial beekeeper.

The detections have triggered a halt on all movement of bees across the state, and hives within a 10-kilometre radius of the Port will also be destroyed.

“I’m in that zone,” said David Vial, an apiarist at Williamtown who is also Amateur Beekeepers’ Association vice-president.

“I’ve got about 150 beehives on my property at Williamtown and by the looks of it all my hives will be eradicated,” he said.

“I have a queen bee breeding program which is going to be terminated straight away.” 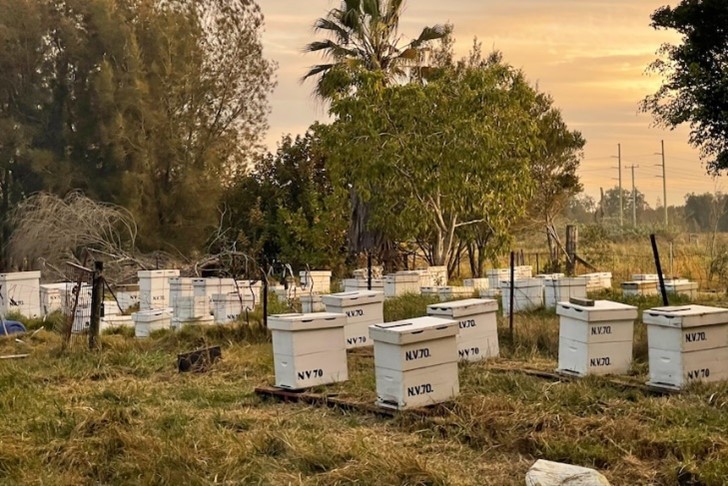 All 150 of David Vial’s hives will be destroyed. (ABC Newcastle: Madeline Lewis)

Mr Vial said the financial impact would be huge for his business.

“I’m probably looking at, over the next couple of years, maybe a quarter of million dollars in lost sales,” he said.

“And not only that but lots of the genetics that I’ve been breeding as well, that will be lost; I’ve got to start from scratch again.”

Three hundred hives in the eradication zone are being tested and destroyed, as well as hives that had been transported to Trangie in the state’s central-west.

“With these sorts of situations, regardless of the species or the issue,  humans moving animals or plants around the state is a big risk to disseminating or increasing the size of the problem,” he said.

“So, eradication becomes significantly harder if it’s all over the place.”

Mr Jackson said while the measures were necessary, he agreed they would have a big impact on apiarists and beyond.

“The impact of this if it gets away is about $70 million to the actual honey industry,” he said.

“And then it’s going to impact the pollination industry, the almond industry and other horticulture crops are reliant on pollination so that the impact could be quite a lot greater.”

Thousands of hives were set to be transported to almond farms across New South Wales, Victoria and South Australia within the next four weeks for pollination.

Mr Vial said beekeepers would lose a lot if they could not get their bees across the border.

“There’s plenty of commercial beekeepers that are just about to organise sending all their hives down to the Almonds for pollination,” he said.

“Now there’s going to be a huge, huge shortage of hives going down to the almonds.

“And that’s a massive financial hit for the almond farmers as well. ”

Thousands of hives are required each year for the almond pollination season.(ABC Features Jennifer Douglas)

Mr Jackson said the bee industry was already under stress.

“There was a shortage of bees in the country anyhow; with the bushfires a couple of years ago, they wiped out a huge number of hives,” he said.

“Building the strength of the hives with the lack of those pollen resources, those blossom resources, has caused them all sorts of angst as well.”