In part one of this article in May I outlined the availability of this technology to beekeepers, and its prospective uses. From here we shall look at the practical application of the technology as demonstrated here at my home apiary through the later part of the winter 2017.

After a brief reprieve in late February (a mid-winter thaw), the force and fury of the Cape Breton, Nova Scotia Winter returned on about March 1st. Although temperatures by continental standards would not be considered severe, a low of 1.5°F (-17°C), the accompanying winds reached 66 mph (106 km/hr) to 72 mph (115 km/hr) velocities. These winds, mostly northwesterly, were continuous for days at a time, with sustained velocities of 38 to 50 mph (60 to 80 km/hr). Needless to say, the wind-chill factor was severe.

These conditions caused concern for the health of my colonies to peak. I made daily forays to the hives and read their thermal signatures, took thermographs, and varied my approaches to the problem.

The March sunshine is bright while the sun is still low in the sky, and this caused some false readings. The black tarps used for hive wrap heated in the sunlight and prevented internal signatures from being read. To correct this problem I took two actions. To by pass the external heat of the hive body I focused the thermal camera onto and into the front entrance hole of the hive (see thermograph T1). The other approach was made at night, which produced better results in respect to internal heat signatures (thermograph T2 and T3). Some residual external heat was visible, but the differences were more pronounced. 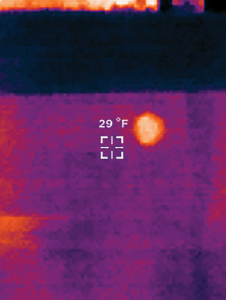 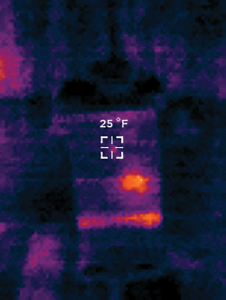 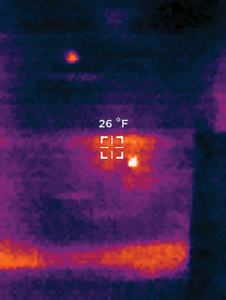 Readings taken at night produced some fascinating effects. When focused on strong colonies that had a distinctive localized cluster, and a bright spherical signature the individual bees could be seen moving around. (thermograph T4 and T5). 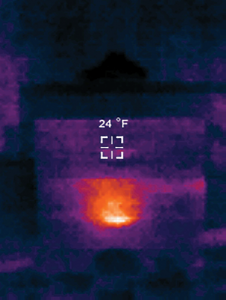 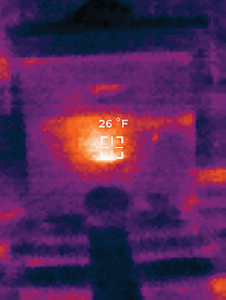 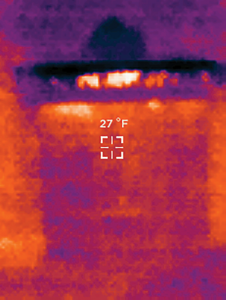 This effect of visibly moving bees has the advantage of eliminating false positives created by residual solar heating. It also provides confirmation of life, and precise location of the cluster. In some cases the cluster takes a rather flattened shape (usually at the top of the hive), or it may be spread out in a lower section. (thermograph T6)

Having now acquired the heat signature readings, some interpretations of the raw data should be made by the beekeeper. In the course of experience and developing techniques these interpretations would undoubtedly become a set of rules. Data collected, as in heat signatures and temperatures, become more significant when accumulated from all sides of the hive bodies. The elimination of extraneous thermal anomalies prepares the data for baseline comparisons from which the expected set of rules would be derived.

This would be a simple matter if the ambient temperature were a constant absolute. However, as our ‘laboratory’ is in the context of the natural environment other factors need to be considered. The living organism of the bee colony will be subject to such environmental factors of the atmosphere as humidity, concentration of CO2, and most acutely the thermal effects of wind chill. 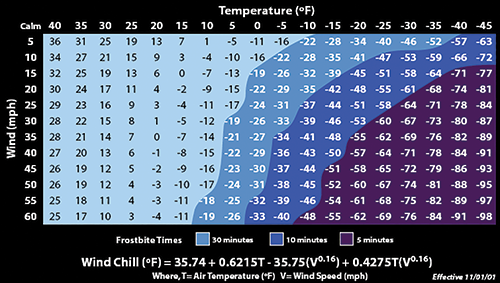 In the highlands of Cape Breton, as well as any other coastal or elevated and exposed areas, winds become the force majeure in the struggle for survival of honey bee colonies. Wind chill calculating equations, and charts, are widely available from climate based data banks such as NOAA, Environment Canada, and your local weather station.

The original formula for the index is:

Although the object’s surface temperature cannot be reduced below the ambient air temperature, the rate at which it drops increases with the wind’s velocity. The total heat loss then, usually measured in BTUs, increases.1

The physiological response of biological organisms, such as honey bees, is to generate more heat to replace the lost thermal energy from heat transfer to the exterior environment.

Heat regulation is critical to the survival of the honey bee cluster in winter. The heat that is primarily generated in the core of the cluster maintains the colony between an upper and lower limit. The mantle (outer layer of bees) of the cluster sustains a lower temperature as it acts as an insulating barrier. The lower limit of the bees is 41°F (5°C). At this temperature the bees are unable to produce metabolic heat and stop moving.

From this description of thermoregulation, and its upper and lower limits in regard to temperature, it is evident that the heat transfer from inside the hive to the outside must not exceed the cluster’s capacity to produce the required thermal balance.

To assist us in quantifying the heat parameters of an overwintering bee colony we shall attempt the following calculations.

The basic formula for heat loss (transfer) is:

Surface area shall be considered the four vertical sides of a Langstroth double hive body. We will consider the bottom board and top lid to be less exposed and better insulated. Thus the surface area involved in our calculation shall be equal to 1460 sq in, or 10.13 feet square. The R-value (insulating coefficient) of pine wood (1”) is 1.25.

Temperature A is the internal average heat, and temperature B is the ambient outside temperature. From our thermographs it can be seen that the heat in the cavity around the cluster is cool, and would be no warmer than the temperature of the cluster’s mantle. We will calculate for minimum and maximum mantle temperatures.

With these parameters selected we can now begin our calculations.

Now if we calculate at the upper cluster temperature.

From these calculations it is evident that the minor insulating value of wooden hives, and the relatively large surface areas causes rather extreme heat loss. If our overwintering colony was entrenched in the hollow of a tree the surface area would be much reduced (cylinder vs. cube), and the thickness (and R-value) would be increased.

Obviously, the rectangular dimensions of the common beehive has inherent disadvantages to the natural habitat of wintering honey bees. It becomes imperative then that beekeepers modify their wintering bee colonies to reduce excessive heat loss and mitigate the ensuing colony mortality when the thermal limits are exceeded.

There are, of course, other more complicated formulas for detecting heat loss and transfer, but I would think that the above calculations would provide quod erat demonstrandum (QED) of the risk to bee colonies in unprotected hives.

We will estimate that a Winter cluster should consist of 10,000 (min.) to 20,000 (max,) bees. To this number we should multiply our thermal unit (heat produced by one bee).

From L. Fahrenholz, I. Lamprecht, and B. Schricker we obtain:

Thus, taking the strong heat production of adult workers – as would be expected in a winter cluster – the calculation becomes: 209 mW x g –1 x 10 4.

At this point we have a sustainable equilibrium based on a healthy cluster of sufficient size and a calm ambient air temperature. Other factors can upset this balance.

A weak colony of reduced size would not produce this level of heat; wind chill that increases the rate of heat loss; and infiltration of cold air through cracks, holes and vents. In conditions of high wind the infiltration factor can be severe.

Let’s presume that the wind chill has the effect of “equivalent” temperature. If we plug these numbers into our heat loss formula the status of the colony changes drastically.

As the cluster shrinks through the course of the Winter (a normal attrition), and the winds continue, the difference between heat production and heat loss diminishes and quite often it reaches the vanishing point.

Beekeeping in the Summer is fun. Beekeeping in the Winter is hard work. Thermography is a multifunctional asset, and the application of this technology to beekeeping should enhance and advance the practical aspects of modern apiculture.

Apologies for any errors I may have made in the above calculations.

2,3Journal of Comparative and Environmental Physiology B Thermal Investigations of a Honey Bee Colony: L. Fahrenholz, I. Lamprecht, and B. Schricker