The Reliability of Science – Part 1
By: Ross Conrad

We have all come to rely on science. It is responsible for most of the technologies we use daily and we rely on it to guide our decision making. As a writer for Bee Culture, I certainly rely on scientific articles to justify and provide credibility for the challenges I highlight that are facing our bees, ranging from pesticides and climate destabilization to electromagnetic radiation. I also use some scientific methods in my beekeeping. For example, I keep a journal to record data and observations, and I will try different honey bee management techniques by experimenting with them on a few hives before I commit to using them on my entire operation. However, while science is helpful, it isn’t the be-all and end-all that it is often made out to be.

What is Science?
Science (sometimes referred to as the scientific method) is the process of asking questions (creating a hypothesis) and then using experimentation and observation to test the veracity of the hypothesis. When science has established a fact, we tend to take it as the absolute truth. In reality, we can’t prove anything in science. What scientists do is gather observational evidence that support some theories and refute others. Over time, the accumulated evidence becomes overwhelmingly convincing, so we can say with a high level of confidence (but never 100%) that one theory is likely a good approximation of the “truth,” while the competing theories are very likely wrong. Thus, a single study on its own does not prove anything much without replication. This process has been the bedrock of the esteem in which science has been held, as an honest and impartial source of evidence-based knowledge that not only advances the frontiers of science but also informs the public and political leaders and aids in decision-making.
Ultimately, science is the best guess we are able to make about the reality of the world based upon what we know, and since what we know is always changing, the determination of what is scientifically “true” is always changing.

Limitations of Science
Because science seeks to be objective, there are large areas of human existence that are outside the bounds of scientific discovery. Science requires the collection of hard data (measurements of some kind) in order to extrapolate patterns and use scientific outcomes to help describe or predict real world experience. However, when it comes to something that cannot be weighed or measured objectively, science becomes useless and things like love do not exist according to science.
Science is also slow, takes a lot of work and is often costly. The time and money required to carry out research severely limits the speed with which new knowledge can be disseminated to the public. The high price of subscriptions to scientific publications and the many publications that exist behind paywalls, along with the often highly technical language scientists use, can further limit access to scientific information.

Problems with Science
One problem with delays in the dissemination of new scientific information is that it can provide a small group of people with inside information that they can act upon, long before it gets out to a wider audience. This creates an uneven playing field in the development of new technologies.
Science has also evolved to exhibit numerous problems and complications that have degraded its integrity. These problems can be categorized into two basic groups: honest mistakes and dishonest mistakes.
Honest mistakes occur when researchers create poorly designed studies or make errors in carrying out their research. Researchers may also allow bias to creep into the process which can unduly influence the questions that are asked, and how questions are investigated. Such errors made following the scientific method have the potential to be fixed and leave room for improvement. At its best, the use of the lengthy peer review process, where fellow researchers unrelated to the study review it, can ask questions and seek revisions in order to validate the legitimacy of the conclusions prior to them being made publicly available, catches many honest mistakes and errors. The peer review process however is not without its own potential pitfalls. Scientific work can so challenge the established dogma that even carefully conducted science can be rejected in what some have referred to as a “political review” process.
Meanwhile, since money is required to fund scientific work researchers often gravitate toward outcome driven science that has the potential for patents and marketable products or systems. This comes at the expense of curiosity driven science that lays down the basic research that can lead to future discoveries and inventions.
Unfortunately basic research, especially that conducted by PhD candidates, is not followed up upon often enough. If there was some process that would guarantee a progressive path that would shepherd basic research projects from one level to the next until it either totally fails and the data can be used to inform future projects, or it produces something of value, scientists would be less likely to shun basic research and such research would become useful faster.

Scientific Integrity
Sometimes scientists appear to get so wrapped up in their work, they succumb to a kind of tunnel vision that causes the researcher to lose sight of moral and ethical standards as they focus on getting their data and finishing their experiment. This can lead to some truly horrific things being done in the name of science such as experiments on Jews by the Nazis, and the United States Public Health Service Syphilis Study at Tuskegee (originally called the “Tuskegee study of untreated syphilis in the negro male”). Honey bee researchers may be falling into this trap with the current research into genetically engineered bees. Scientists are far from fully understanding the full impacts to an organism when they change or modify one or more genes and if changes that are harmful get released into the global population of bees, honey bee bioengineering could cause more harm than good.
In many ways, today’s scientific community has even greater challenges conducting quality science that won’t get twisted in a dark way as they navigate more and more ethical questions and conflicts. 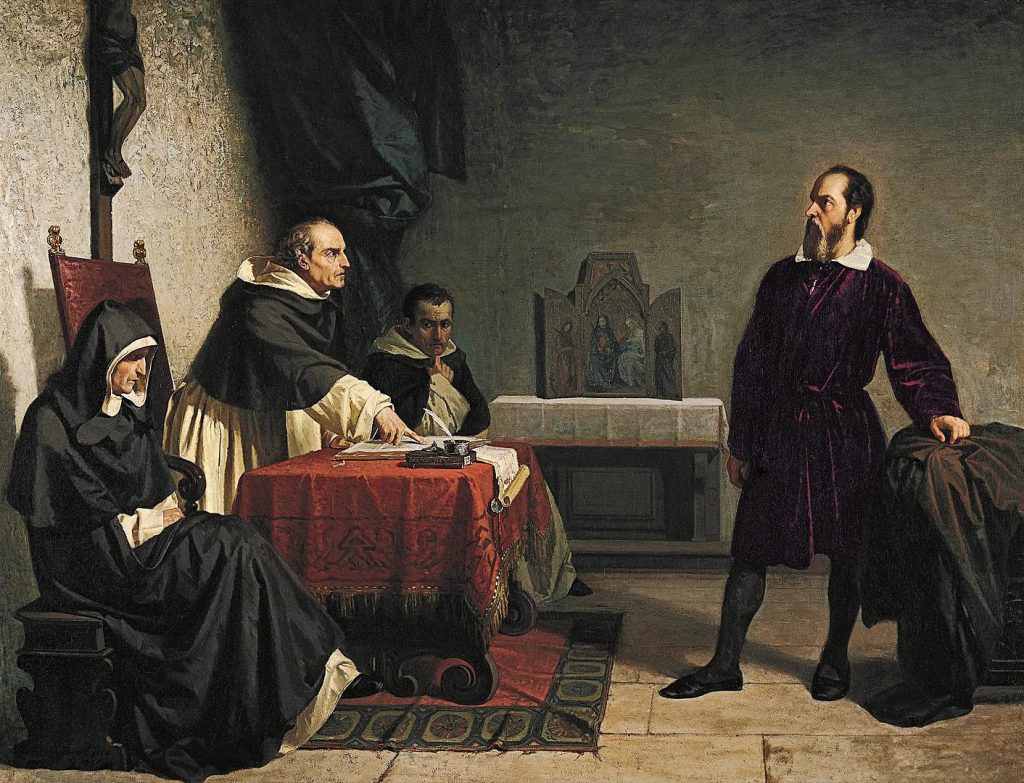 The poster child for the ‘political review process’ is the Italian astronomer Galileo (widely considered the father of the scientific method) whose support for the theory that the earth revolves around the sun, and not the other way around, was so opposed by the Roman Catholic Church that he was forccd to recant and spent his final years under house arrest for this heretical stance. Painting by Cristiano Banti (1857) Galileo facing the Roman inquisition: Soucre Wikipedia

Corruption of Science
Science can obviously be helpful, but it can also be misleading or even harmful when manipulated for personal gain (profit, power, or prestige) rather than the sincere search for truth about the nature of reality. Due primarily to the corrupting influence of money, over the years there has been a growth in the amount of intentional mistakes, omissions, oversights, fraudulent work and censorship being made in the realm of science.
Some of the problem can be traced to administrators who have a profound influence on science. Since they hire and fire individual researchers in their departments or organizations they can have significant influence over which studies get carried out and which don’t. In honey bee research this issue is most likely to emerge within regulatory agencies like the U.S. Environmental Protection Agency (EPA) or university settings.
Unfortunately when a scientist’s research suggests a result that large donors are not happy with, administrators have been known to censor scientific work preventing it from being published and have even prohibited researchers from discussing their work publicly. Should a scientist blow the whistle on such actions, administrators are not above personal attacks or other forms of retribution designed to punish the whistle blower and discourage others in the organization from following a similar path (Lerner 2021a, 2021b). Unfortunately, the agency responsible for protecting bees and other pollinators from dangerous pesticides and other pollutants (U.S. EPA) has a long history of employees stepping forward as whistleblowers and then being retaliated against despite laws that are supposed to prevent such retaliation.

Pseudo-Science
Some companies market their products as “clinically proven” which sounds scientific but is often not the case. Even when a company actually conducts research it is typically not published in a peer-reviewed journal. Companies claim the additional time and expense of the peer review process is prohibitive, or that their research is proprietary information, when the real reason is because the “science” does not meet accepted scientific standards and/or is not reproducible.
Meanwhile, it has been estimated that there are hundreds of journals that lack ethical practices in carrying out the peer-review process and have extremely low standards. When such journals publish something, the information then becomes fodder for unknowing researchers and scientists who are duped into believing it’s true. Given the immense amount of pressure on academics to publish, some become desperate enough to— either unintentionally or sometimes intentionally—engage with such predatory journals.
The importance of getting one’s work published can impact scientific integrity due to the publication bias that is exerted within scientific circles. The more dramatic and surprising the study results, the more publishable the study is and researchers will sometimes sensationalize their findings, articles and publicity surrounding their research in order to help ensure publication and widespread dissemination.
As I have outlined above, many of the drivers of compromised science are systemic and embedded in the current scientific-process intended to gather and disseminate evidenced based knowledge. It is within this peer review process where we see the intersection of scientific advancement and reputational and financial rewards for scientists, publishers incentivized gaming to capture more eyeballs for the attention economy. Unfortunately there is another major factor that is at work in the realm of fraudulent science: big business. We will explore the corporate war on science and its potential impacts on honey bee science next month in part two of this series.

Ross Conrad is the author of Natural Beekeeping: Organic approaches to modern apiculture, and co-author of The Land of Milk and Honey: A history of beekeeping in Vermont. He will be teaching an organic beekeeping for beginners two-day intensive class May 7-8th and an intermediate beekeeping class on May 21st in Vermont. For more information visit: www.dancingbeegardens.com/events.html