It is Summer in the city, and local governments have started their mosquito abatement programs. Concerned for public health, municipalities spray insecticides and larvicides through communities to control mosquitoes. While some communities have pro-active programs to alleviate standing water and other breeding areas for mosquitos, the preferred practice is to spray and fog our cities, roadways, ditches, and waterways with pesticides. Of the typical pesticides used for mosquito control, most are applied by trucks spraying the product as it drives down your street, or along the side of the road. A random perusal of various state and city mosquito abatement processes conflict as to the “best time” to apply the pesticides in order to cause the least harm to honey bees and native pollinators. Sadly, far too many of the extension documents and state guidelines claim bees are not active after 3 p.m. which is just blatantly false. Honey bees and native pollinators will forage blooming plants until the sun sets. To fully protect honey bees and native pollinators from mosquito control pesticides, the pesticide should only be applied when it is dark: the sun has set and the street lights are lit. Dark is dark, not twilight, not sunset: dark.

Bee kills across the U.S. in agriculture are typically due to tank mixes and prophylactic use of pesticides on plants grown from pesticide coated seeds.  In urban and suburban areas, mosquito abatement practices are causing unnecessary bee kills. Some cities offer beekeepers the opportunity to “opt-out” of mosquito spray applications near their property.  However, the “opt-out” process is sometimes cumbersome. One Massachusetts community went from 400 people opting out, to only 100 opting out the following year due to a change in the application process requiring certified letters to be sent to the local government. Other communities provide a sign to you to post at each end of your property so county workers will not spray between the signs (your property frontage). However, they continue to spray before and after your property signs. Even if a beekeeper opts out of having their property sprayed for mosquitoes, pesticides drift onto water and blooming plants. Not all mosquito control products have a short residual toxicity, and can last more than eight hours on the blooming plants and in water. The next day when bees drink from a puddle or stream, or collect nectar from a bloom containing a mosquito control pesticide, the honey bee or native pollinator may die.

Many mosquito control products speak to addressing mosquito larvae in water, and then imply the pesticides in the water will not harm bees. Bees do drink water. So, if a pesticide lingers in the water, bees will encounter the pesticide there, as well as on blossoms, and guttation droplets on plants. Far too many mosquito control documents ignore the fact bees drink water, and mislead the pesticide applicator stating bees stay in their hives after 3 p.m.  Those two issues lead to great harm being caused to honey bees and native pollinators. Every living creature needs clean, pesticide free water to drink; and “busy as a bee” means on warm, hot days they work from sunrise to sunset, and they need water to cool the hive, and themselves. 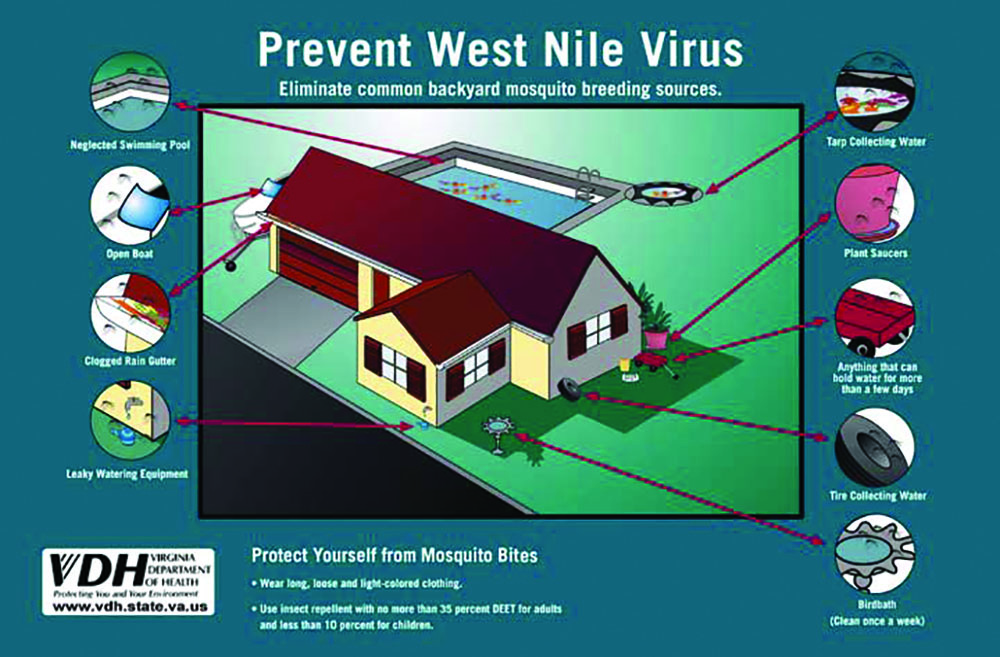 A study of mosquito control products effect upon coastal water showed how pesticides and the water can interact to create a more toxic situation. Research published in the Archives of Environmental Contamination and Toxicology “determined that lower oxygen levels in water, known as hypoxia, and increased acidification actually increased how toxic some of the pesticides were.”1 This study of mosquito control products along coastal areas found differences in sensitivity “between chemicals, species, and life stages” in clams and oysters due to drift overspray or unintentional drift into coastal waters of mosquito control pesticides. While this study showed decreased swimming activity after four days in oysters, and decreased growth in clams and oysters after 21 days, the researchers calculated a low-level risk to oysters and clams “from application of these pesticides for mosquito control.” The researchers did note “The more extreme climate conditions caused increased pesticide toxicity.”2 While this study is of clams and oysters, the changes in the water and the pesticides show an increased toxicity. Honey bees live near coastal areas, and drink from the waters draining into these estuaries.

The U.S. Geological Survey Water Science School exclaims water plays an important role in the movement of pesticides as “it is one of the main ways that pesticides are transported from the areas where they are applied to other locations, where they may cause health problems.” As many larvicides are applied to water, where mosquitos breed we create a toxic water source for our honey bees and native pollinators. “Pesticides can reach water-bearing aquifers below ground from applications onto crop fields, seepage of contaminated surface water, accidental spills and leaks, improper disposal, and even through injection waste materials into wells.” states the USGS Water Science School. As many bee kills are the result of tank mixes of herbicides, insecticides, and fungicides, “Some pesticides have had a designated maximum Contaminant Limit (MCL) in drinking water set by the U.S. Environmental Protection Agency (EPA), but many have not. Also, the effect of combining more than one pesticide in drinking water might be different than the effects of each individual pesticide alone. It is another situation where we don’t have sufficient scientific data to draw reliable conclusions.”3 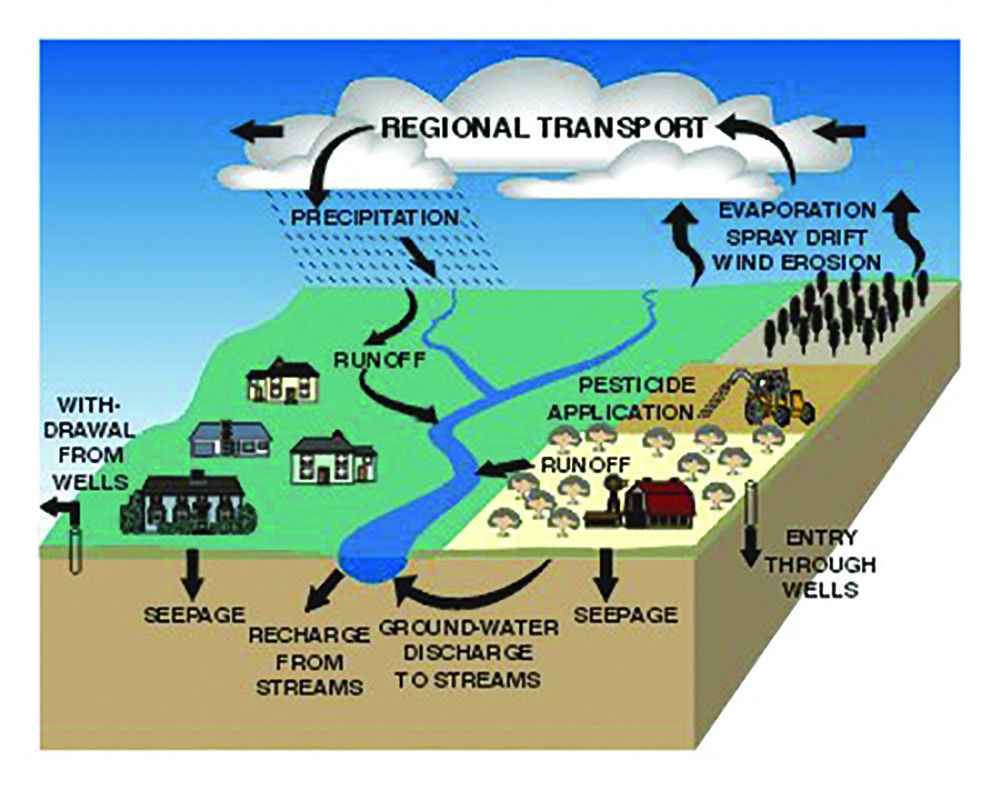 Pathways of pesticide movement in the hydrologic cycle from www.pubs.usgs.gov

Typical mosquito control products listed on local government mosquito control websites are: methoprene, Bti, Bsp, temephos, sumithrin, malathion, permethrin, and chlorpyrifos. Not all of these products are applied individually, and even if they are, they are always mixed with surfactants or oils, and “other ingredients” for which there is little information.

One mosquito control product is a combination of prallethrin, Sumithrin® and piperonyl butoxide.  The label clearly states: “This pesticide is highly toxic to aquatic organisms, including fish and aquatic invertebrates. Runoff from treated areas or deposition of spray droplets into a body of water may be hazardous to fish and aquatic invertebrates. Do not apply over bodies of water (lakes, rivers, permanent streams, natural ponds, commercial fish ponds, swamps, marshes or estuaries), except when necessary to target areas where adult mosquitoes are present, and weather conditions will facilitate movement of applied material beyond the body of water in order to minimize incidental deposition into the water body. Do not contaminate bodies of water when disposing of equipment rinsate or wash waters. This product is highly toxic to bees exposed to direct treatment on blooming crops or weeds. Do not apply to or allow drift onto blooming crops or weeds when bees are visiting the treatment area, except when applications are made to prevent or control a threat to public and/or animal health determined by a state, tribal or local health or vector control agency on the basis of documented evidence of disease causing agents in vector mosquitoes, or the occurrence of mosquito-borne disease in animal or human populations, or if specifically approved by the state or tribe during a natural disaster recovery effort.”7

The Pollinator Stewardship Council has previously pointed out EPA approved labels that start out protecting pollinators, and then include “exceptions” allowing for pollinators to be sacrificed. Even in the above label’s environmental hazard statement the two exceptions: to apply to bloom, and to water, are allowed with full understanding honey bees and native pollinators will be killed. A public health emergency allows for the exceptions to occur and application of the product made against the label protections for pollinators. Communities must ensure they are truly protecting human health. Ask your local Health Board if they are trapping and testing mosquitoes for disease. If diseases are not found in mosquitoes, then tax dollars should not be wasted applying a pesticide when it is not needed. Prophylactic use of pesticides is as problematic as prophylactic use of pharmaceutical drugs. Regular use depletes their ability to work.
We can protect human health, and we can protect honey bees. Beekeepers should be able to protect their honey bees from mosquito control products.  As a community we should protect our native pollinators.  As individuals we can be proactive to protect our property from mosquitoes, and protect our honey bees and pollinators from the adverse impact of mosquito abatements.  If a health risk is established, a short residual toxicity mosquito control product should only be applied after the sun has set, when it is dark. Only then will honey bees and native pollinators have a chance to survive mosquito abatements.

If you experience a bee kill due to a mosquito abatement program in your community: report it! Refer to the Quick Guide for Reporting A Pesticide-related Bee Kill