Kentucky State Apiarist and author Dr. Tammy Horn Potter blazed a trail across literary and beekeeping circles in 2005 with the publication of “Bees in America: How the Honeybee Shaped a Nation”, a masterful compilation and study of fact, folklore and history of the honey bee. 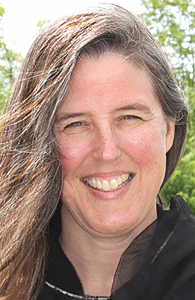 She hasn’t stopped since. She followed with “Beeconomy” (University Press of Kentucky, 2011) exploring the relationship between women and bees around the world along with the impact and potential of the female aspect intrinsic to beekeeping.

In her newest release, “Work I Knew I Must” (Root Press, December 2016), Horn Potter juxtaposes the journal of A.I. Root, an 18th century beekeeper, innovator and entrepreneur, with the autobiography of Jane Cole, a Root employee of 41 years.   The genesis for “Work I Knew I Must” came during a west coast book signing for “Bees in America”, when Horn Potter was handed a copy of Cole’s book. The writing dated to the 1870s and detailed Coles career as a “hand” at the A.I. Root factory.  “Her story was so compelling because it mirrors the experiences of so many women currently in the 21st century,” says Horn Potter.  In collaboration with “Bee Culture” Editor, Kim Flottum, who suggested including excerpts from “Gleanings in Bee Culture” and additional journal entries from A.I. Root, the book began to take shape. “A.I Root was by all accounts a very progressive person in many ways,” adds Horn Potter. He had never seen himself as the owner of a beekeeping company just as it was really transitioning into an industry. The two of them unbeknownst to each other are writing about the struggles of making this factory a success.”

Readers may scratch their heads and chuckle at Root’s description of his first attempt to keep a “swarm.” But the book goes much deeper with relevance for today’s entrepreneurs, business owners and their employees.  “Initially I just wanted her story to come out again,” says Horn Potter.  “A lot of the struggles don’t need updating . . . divorce, post-traumatic stress syndrome, trying to find a job, trying to keep a job, being laid off. . . Her (Cole’s) devotion and loyalty were to the company and Mr. Root.”

Horn Potter was born in Harlan County, Kentucky in the 1960s, to parents who taught history and English. Her grandparents were beekeepers on both sides of the family tree. Uncles and cousins worked in the Eastern Kentucky coal mines. Early formative years spent on a pig farm left her with a determination never to become involved in anything remotely agricultural. Instead she embarked on a successful university career which eventually led to a PhD and teaching positions in English and literature at the University of West Alabama, Eastern Kentucky University and Berea College. As time and events began to unfold, her life’s work would take her back to her roots, leading to parallel paths that, in the end, would embrace both her love of literature and beekeeping.

Following a year of conceptual and abstract thinking completing and defending her doctoral dissertation, an opportunity arose for her not only to return to Kentucky, but also to plant both feet firmly on the ground. She hit it running.  “I came home to take a breather as was much needed,” explains Horn Potter. Her grandfather needed help with his beehives and, not without reservations, she agreed to give it a try. Describing her grandfather as a “sometimes difficult man,” she adds, “His whole personality shifted while we were getting ready to go into the bees. He became more patient – his tone changed as he was talking to the bees . . .  I had never heard this side of him before. There was a tenderness. I thought we were going to war. We were suiting up and lighting the smoker. We were planning our attack, but that wasn’t what was happening that morning . . . As soon as we opened that first hive, I realized that I should have always kept bees. After we finished the rest of the day, I went back the next day and the next.  I went back all Summer. That was in 1997 and next year will be 20 years.”

In 2008, while exposure and outrage over coal mining industry practices of strip mining and mountain-top removal were approaching a fever pitch throughout much of Kentucky and other coal mining regions, in her role as National Endowment for the Humanities (NEH) Chair of Appalachian Studies at Berea College, Horn Potter turned her attention to solutions. Reaching out to like-minded organizations, she founded and spearheaded Coal Country Beeworks (CCB). With a private grant of 30 mite-free hives and the support of the EKU Center for Economic Development, Entrepreneurship and Technology, (CEDET) along with International Coal Group (ICG) Hazard, James River Coal, and TECO mining companies, CCB initiated a reclamation effort by placing apiaries at surface mined locations with native plantings.

Appointed Kentucky State Apiarist in 2014, it became necessary for Horn Potter to step down from her hands-on role, however she remains closely involved with Coal Country Beeworks and continues to reach out to other organizations seeking active solutions. Under her stewardship CCB continues to develop and expand with the scheduled 2017 groundbreaking for an Appalachian Wildlife Foundation center in Belle County, Kentucky slated to include an apiary. A current and ongoing grant provides for a 4-H and FFA program in the area focused on honey bees. An early grant continues to fund the Eastern Kentucky Winter Bee School held in January which kicks off a round of bee schools across the state. A partnership in West Virginia with Green Forest Works (GFW) and their non-profit,  Appalachian Regional Reforestation Initiative (ARRI,) includes plans to renovate an old 4-H camp in Lewisburg into an apiary and nursery for growing the trees needed to support apiaries on selected Eastern Kentucky reclamation sites. A second federal grant provides for hiring and training veterans to manage the facility. According to CCB, coal companies have currently created more than 33,000 acres of reclamation land through the planting of native trees and flowers.(http://cedet.eku.edu/coal-country-beeworks)

“We all know the Midwest is saturated with pesticides,” says Horn Potter. “That’s my hope for the state, within the next four years, to really develop this Appalachian area because it has practically no issues with the ag chemicals or even the urban insect control problems like we see in South Carolina and Miami. What I want is for our region to really hunker down now and focus on queen production. We can produce good quality queens.” 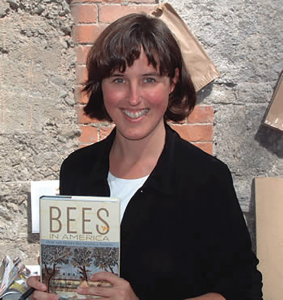 Creating a Queen Breeders Association and developing a solid breeding program in Kentucky are high on her priority list. Earlier this year Horn Potter traveled to Purdue University for a first-hand look at a breeding program targeting bees that destroy Varroa mite by tearing the mites apart. This promising new strain of honey bee is referred to as the “mite biter.” Under the leadership of Greg Hunt, the Purdue program focuses on research and selective breeding, farming the “mite biter” queens out to neighboring states as part of each state’s queen breeding program.

Back in Kentucky Horn Potter is working quickly to establish four distinct areas for breeding across the state with a goal of receiving “mite biters” into a newly established Queen Breeder’s Association program by 2017.  “And not just the mite biters,” adds Horn Potter. “We need to get the New World Carnies and the Russians. We need our own Appalachian line . . .  That too is a commitment and it’s going to take long term education which sometimes I feel is a challenge.”

On the national level, she believes one of the industry’s biggest challenges is to achieve a federal definition of honey, adding that until that happens, beekeeping won’t be taken seriously. “We’re not going to have one until we get serious about shipments of honey from China and Brazil,” says Horn Potter. “We are importing 350 million pounds of honey every year and that really depresses the market for local beekeepers.”

In her appointed role as Kentucky State Apiarist, Horn Potter’s typical day may involve speaking and teaching at bee schools and workshops, honey tastings and judging, and hive inspections, along with planning and strategy meetings. On the side, when she isn’t writing (she has at least two more books in her back pocket), preparing grants and working on business plans, or traveling to research facilities and labs across the country to learn about the latest discoveries and technology in the industry, she and her husband work side by side, supporting their 100 hives on her grandfather’s original farm.

In addition to her books, Horn Potter has given numerous interviews and written numerous articles about bees and beekeeping. She is the recipient of several state and national awards for her efforts on behalf of the industry.  (http://www.tammyhorn.com)

Her literary success along with years spent in the halls of academe give her a formidable skill set when it comes to consensus building and organizational ability. Her early years growing up in Kentucky and nearly 20 years of working with honey bees likely are more responsible for the down to earth, straightforward quality that Horn Potter brings to work every day. All added up, the beekeeping industry gains a powerful advocate for the future of the honey bee and related enterprises.

Beekeepers in Kentucky and even across the country will need to keep their running shoes handy if they want to keep up.