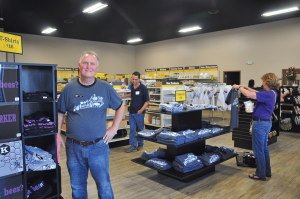 A loud buzzing overhead attracted the attention of the group assembled at the Kelley Beekeeping Company in Clarkson, KY. As people glanced around the cavernous woodworking shop and then up towards the lofty ceiling they saw, not an errant late season swarm of honey bees, but a camera-equipped drone. The occasion was the official opening of the Kelley company’s new building which houses the woodworking shop, offices, a warehouse, sales floor, and more.  The ribbon cutting was held on September 23rd during Clarkson’s annual Honeyfest. The ground breaking ceremony had taken place just a year earlier during the 2015 festival. Things have been moving quickly at Kelley. 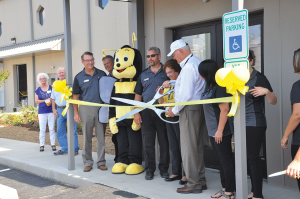 Readers of Bee Culture are familiar with the company, known until recently as the Walter T. Kelley Company, as a manufacturer and distributor of over 3,000 beekeeping products. It is a small business success story with a long history interesting enough to deserve an article of its own. (Check upcoming issues.)  Between Mr. Kelley’s death in 1986 and September of 2014, it was owned first by a trust, then by the local Twin Lakes Regional Medical Center, and most recently by a private partnership. That is when the Frandsen Corporation entered the picture. Frandsen, another success story, is a family owned business with its headquarters in North Branch, Minnesota. Begun as a one-man operation by Dennis Frandsen in 1951, it now owns a family of companies in various fields from banking to plastic injection molding. In 1996, it acquired Miller Manufacturing, a manufacturer and distributer of farm, ranch, and pet products.  Frandsen decided in the Fall of 2013 that beekeeping supplies would be a good fit with Miller’s customer base and distribution network.

After considering several potential suppliers, they began purchasing equipment from the Walter T. Kelley in January of 2014.  By March of the same year, Kelley products were being distributed and sold in retail stores by Miller under the brand name Little Giant®. Within a few months, Miller’s demand exceeded Kelley’s production capacity. Frandsen made the decision to purchase Kelley in order to expand. An agreement with the owners was reached, and on September 10th, 2014, the Frandsen Corporation announced its acquisition of the Walter T. Kelley Company and its new name: Kelley Beekeeping Company (KBC). According to the press release announcing the transaction, “Although formally an acquisition, the intent and spirit of the transaction is to create a partnership among KBC, Frandsen, and Miller.” It refers to KBC as “a sister company” to Miller Manufacturing. “The beekeeping industry has exploded with growth in recent years and is expected to continue growing and evolving rapidly,” said Dan Ferrise, EVP of Frandsen and CEO of Miller. “We will provide the KBC team with resources that will allow them to continue to grow to meet the needs of beekeepers throughout North America.”

One on those resources is the new building. At 82,000 square feet, it is far larger than is necessary to meet KBC’s current needs, but Dennis Frandsen, CEO and president of Frandsen Corporation, announced at the opening ceremonies that they hope to double and then redouble KBC’s production capacity in the next few years. To that end, they have included room for expansion in the new warehouse, office area, and woodworking shop. Much of the equipment in the latter is new and state of the art, and the whole facility was designed to be environmentally conscious. An enormous air handling system, equipped with fire safety features, vacuums up sawdust at the point of creation and stores it in outside tanks to be recycled into animal bedding, fire logs, and composite material for decking and outdoor furniture. The warehouse is cooled in the Summer by air pulled through the open truck bay doors and out ceiling vents by two large fans. In Winter, the air compressor room is vented into the woodworking shop next door to provide heat. LED bulbs are in use, and additional light is provided by hexagonal (of course) windows near the ceiling. 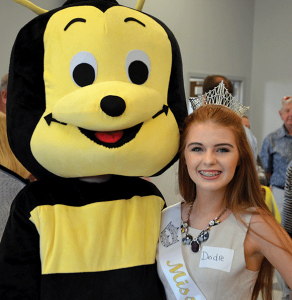 The new building not only consolidates some KBC departments which had been dispersed among several older structures, it also incorporates space for new activities. For instance, the company now has an extracting room and equipment for the use of local beekeepers at harvest time. Some of the older buildings will be put to new uses. Former retail space will become the Walter T. Kelley beekeeping academy, and used for beekeeper training and for field day seminars.  Not all manufacturing processes were moved to the new facility.  Wax foundation is still made on the property at a site where, in the past 60 years, two earlier buildings have burned. 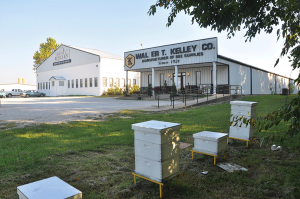 That 60-plus-year association between Kelley’s and Clarkson is important to the city. With over a hundred people now working at the company, it’s the largest employer in town, but that isn’t all there is to it. The entire community seems to have embraced everything related to honey and bees. The Clarkson Honeyfest, held every year for three days during the last weekend in September, celebrated it’s 22nd anniversary in 2016. The web site for the festival proudly proclaims, “We’re all about the HONEY BEE!” In 2006, the Kentucky General Assembly designated it Kentucky’s Official State Honey Festival. It has everything you would expect to see in a small town festival: a parade with fire engines and politicians and floats, a beauty contest to crown Miss Honeyfest, live bands, rides, food, and craft booths. But there is also a honey bee themed flag on literally every street light in town. Homes and businesses are decorated with a bee theme (there’s a contest), and costumed children make some of the cutest honey bees you’ll ever see. Needless to say, the vendors in the craft booths include several selling honey and bee-derived products. The Honeyfest board estimates that several thousand people a year visit Clarkson for the festival – in a town with fewer than a thousand residents. 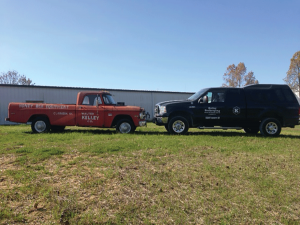 In scheduling both the ground breaking and ribbon cutting ceremonies for the weekend of the Honeyfest, the officers of the Frandsen and Miller companies demonstrated a sensitivity to the close relationship between company and community.  Frandsen Corporation’s investment in the expansion of the KBC was significant enough to bring representatives from the offices of the state’s Governor, both senators, and the Kentucky Secretary of State to the ribbon cutting, but none was more enthusiastic than Clarkson’s mayor, Bonnie Henderson.  Negotiations for Frandsen to buy the eighteen acre property on which KBC is located were complex. Though the Frandsen Corporation had purchased the company from the partnership, the land and buildings were still owned by the hospital. During the process, Mayor Henderson told the city attorney, “We need to do whatever we have to in order to keep Kelley in Clarkson, as long as it was legal. We are Beekeeping USA and there’s a lot of reasons to keep the company here.” After the successful conclusion, Dan Ferrise, CEO of KBC, stated, “We are pleased to continue to invest in the community and further strengthen our roots in Grayson County.” 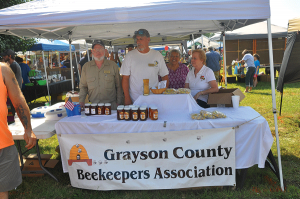 The new facility is not the end of Frandsen’s plans for Kelley. New construction and new machinery are part of them. They hope to continue to increase production and sales. Asked if they intended to expand their marketing to commercial beekeepers, a spokesman said, “We are focused on optimizing our service model to efficiently serve and grow with all types of beekeepers.” Mr. Frandsen indicated in his address that a second distribution center in the western part of the country is a future possibility. Best of all from the community’s perspective, KBC expects to expand the number of its employees by 30% in order to achieve its projected sales growth. 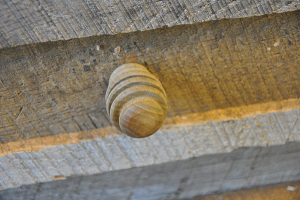 Amidst new construction and plans for the future, it’s reassuring and touching that nods to the history of the Kelley Beekeeping Company are so much in evidence.  During the speeches inaugurating the new building, both current and past Kelley employees were recognized – particularly those who have been with the company since the days of Mr. Kelley. In the woodworking shop, state of the art computerized manufacturing equipment operates alongside ancient, one-of-a-kind machines designed and built by Mr. Kelley and his metal working specialist in the 1940s. The flat screen, hi definition TV showing beekeeping videos in the very modern sales area is flanked by cabinets made of wood recycled from the old barn which was torn down to make room for the new headquarters. (The handles and drawer pulls are made from the heads of honey dippers.)  Even Mr. Kelley’s old truck still sits in front of the building, on permanent display.

Phil Craft is one of Bee Culture’s regular contributors with his Ask Phil column.