Breathless reports tell that us flights of artificial pollinators will arrive any minute.

A scientist at Japan’s National Institute of Advanced Industrial Science and Technology created a miniature drone with a patch of electrostatically-charged clingy hair to catch pollen1. In the USA, Harvard scientists from the Wyss Institute work hard on a similar RoboBee2. Their version remains tethered. Researchers hope that further development will let them unleash their creation from a power-providing umbilical. Scientists from both research groups grant that biological pollinators still possess greater efficiency in agricultural pollination services. But they’re hopeful. They believe their creations can save agriculture by replacing species in decline.

Others warn of the dangers of these synthetic pollinators. Greenpeace’s cunning “NEW BEES” video3 looks like a pharmaceutical advertisement. In it, a field’s pollination needs are satisfied by autonomous pollinators linked to a deployment station with a pulsing green light. The New Bees destroy enemy insects – an Asian Giant Hornet plays the villain – with targeted applications of pesticides. Two children frolic in the field, safe from harm. The Greenpeace video ends with an alarming question: “Should we create a new world or save our own?”

Confronted by these two futures, beekeepers cower behind their veils.

The debate4 over whether or not to deploy synthetic pollinators is young. But it proceeds predictably. Pieces on synthetic pollination seem to focus solely on the engineering marvels of new devices (thus avoiding green-tinted controversy) or the audacity to create something that could replace ecosystem services (ignoring the well-meaning of engineers). Colony collapse disorder is trotted out. Einstein usually lurks somewhere in the background, threatening to pelt everyone with warnings about the end of civilization. Soon, the prospect of human control over the agricultural services and our ecosystem becomes an attractive alternative to extinction. In many ways, the debate is already over. WalMart recently secured patents for autonomous pollinators, as well as drones that track down plant pests and drones that monitor crop health5.

But absolute control over all pollination introduces interesting questions about the role honey bees and their native cousins play in the world’s ecosystems.

Honey bees, with their two mile forage range, represent a vital pollinator in their habitat, whether as an introduced species, such as in North and South America, or a native species, as in Eurasia and Africa. According to recent research, honey bees act as a foundational pollinator (Hung, Kingston, et al. 2018)6. In some areas, research found that honey bees represent nearly all pollination.

But as a beekeeper, it didn’t take me long to recognize my bees had preferences. They pollinated what they wanted, when they wanted. Intentional plantings on our Pennsylvania homestead went unnoticed. The bees only found the borage late in the season. I usually don’t see the honey bees on our tomatoes. 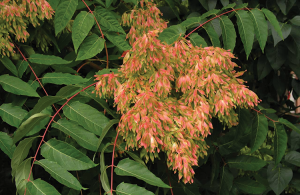 On the other hand, our burning bush looked like a bacchanalia in the Spring, with some kind of bee hanging on every one of its tiny green blooms. As some may know, the introduced burning bush species (Euonymus alatus) represents a threat to local ecosystems. Plenty of people later enjoy the fiery Fall foliage, but it spreads rapidly through its copious berries, which are also poisonous to humans. It displaces native plants. But the bees love the nectar. Other invasives I have seen my bees visiting include: multiflora rose (Rosa multiflora), Canadian thistle (Cirsium arvense), Bermuda grass (Cynodon dactylon), and my vote for tastiest invasive, Japanese wineberry (Rubus phoenicolasius).

My bees travel long distances to perpetuate species that harm landscapes, displace natives, and create wildlife habitat for other invasive species. The last is especially a problem here in Southeastern Pennsylvania, where the invasive tree of heaven (Ailanthus altissima) plays host to a frightening species of invasive insect, the spotted lanternfly (Lycorma delicatula). While I haven’t observed it firsthand, I have read beekeepers online complaining about piney-smelling honey from the tree of heaven. I will be examining their blooms this Spring to see if my bees are attentive to them.

If a flower is in abundance, it tastes swell, and the weather is right, honey bees will be there by the thousands. Honey bees find what nectar they like and exploit it, irrespective of its origins.

For a moment, let’s give the futurists the benefit of the doubt and imagine a dismal future.

In 2030, scientists will perfect an autonomous mechanized synthetic pollinator swarm. Careful trials on USDA research fields will start with a cash crop. Apples, let’s say. Each drone will operate independently, gently pollinating orchards, keeping track of already-pollinated flowers, working with efficiency. Solar-powered, run through a thoughtful artificial intelligence system that selects for white blossoms instead of purple bindweed flowers, crops will continue to have bountiful harvests in spite of the fact that bee sightings are now few and far between.

Meanwhile, in the wild spaces around the farms, in our parks and wilderness areas and highway medians and backyards, wild plants will go season after season without pollination.

Extinctions take time. It took market hunters years to wipe out the buffalo. Globalized diseases, habitat destruction, and chemical application are insidious and slow-moving threats. But if pollinators begin to decline, expect to see accelerated development of synthetic pollination methods.

Yet a beekeeper’s hive doesn’t operate in isolation. Whether the beekeeper lives in Idaho where the winters are cruel or in tropical Jamaica, a hive represents millions of pollination trips to the landscape. Honey bees shape their home ranges.

So do we allow synthetic pollinators to carouse with our wild plants? With which plants do we permit them to interact?

As I said before, I enjoy the invasive wineberries in my yard during the season. They ripen around July. By then, the black raspberries are done, the blackberries are still green, and the raspberries still need time too. Yet as an invasive berry plant from Asia, they can and do displace our natives. Do they deserve to be pollinated? If we play God, what flora survives? 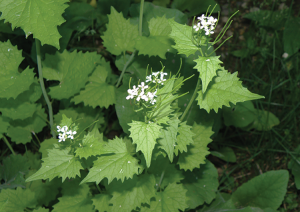 But would this dearth of indiscriminate, uncooperative pollinators be humanity’s chance to rid itself of its most insidious invasive plants? I cleared an entire embankment of garlic mustard last year. The plant contains allelopathic chemicals, poisoning the soil around it. Pennsylvania’s deciduous woods are filled with the stuff. Deer don’t it eat, but pollinators service it. Could we finally restore Pennsylvania’s woodlands to their native state without bees mucking up the careful balance?

These questions seem out of the realm of practical beekeeping. Yet they open up lines of ethical inquiry into how our bees interact with their environment, the role of pollinators in perpetuating undesirable species, and how picky and unpredictable our bees actually are. A homesteader might have goats clear a rocky hillside, but I haven’t found a way to intentionally pasture my bees.

But perhaps that’s acceptable. It means humans aren’t the only species to shape our own environment. Bees, as long as we steward them, will make choices about the flora thriving in the places we make wild.

And in closing, it’s important to say that not one of the robots being proposed will make honey.

Will Caverly is a beekeeper in Pennsylvania and one of the stewards of Satoyama Homestead. The homestead website can be found at satoyamahs.org, where they maintain a blog and record The Original Transplants podcast.