By now the only beekeepers not finished harvesting their honey in the Northeast are either procrastinators, or large operations with thousands of hives. Harvesting honey late in the season after most nectar sources have dried up is no fun. The bees rob like mad and are never happy to see you. The honey is cold and thick and takes forever to flow out of the combs and this usually means a lot of time and energy is spent heating the honey prior to extraction in order to speed up the process.

One of the prerequisites of harvesting honey is that you will need honey containers and storage space. At the very least, space to store the honey harvested, and usually much more such as for storing empty combs, plus all the other equipment from veils, hive tools and smokers, to extractors, pumps, filters, wax separators, honey tanks, bottling tanks, and more.

With some forethought and planning, the amount of storage space you will need for your honey containers will be minimal and of short duration. In order to reduce storage pressure, honey containers can be ordered and received shortly before the harvest so that the number of containers ordered will be closely matched with the amount of honey to be harvested. It can be tempting however, to take advantage of bulk pricing and purchase bottles/jars by the pallet and bottle caps by the case rather than in smaller quantities. Such price breaks are hard to take advantage of though if you don’t have space to store the excess from year to year. Empty jars, bottles, drums, etc., should be stored near the honey extracting/processing area so they are conveniently located when needed. The good news is that the storage space taken up by the honey containers prior to being filled can often be used to store the containers once they are filled with honey.

Thankfully honey is the only natural food we have that when stored in its natural, unprocessed state will, for all practical purposes, never spoil. Nothing harmful to humans can grow in honey. In fact honey that was over a thousand years old was found in the tombs near the Egyptian pyramids and it was still perfectly edible. The story, as documented by Eva Crane in The World History of Beekeeping and Honey Hunting, notes that one of the tomb raiders tasting the honey noticed a hair on their finger after dipping into the large vase full of honey. Upon closer examination, it was discovered that a small child had been preserved upon its death within the vase of honey.

How best to store your honey crop? One of the most important honey storage issues is keeping honey in containers that are moisture proof. Ripe honey with a moisture level below 18 percent is hygroscopic and will draw moisture to itself. Leave the lid off a jar of honey long enough and it can draw enough water out of the humidity in the air to raise the moisture level to the point where the honey may ferment or mold will start to grow in the honey.

Temperature is also a major factor that impacts the quality of honey in storage. Ideally, honey should be stored in a cool and dark place. However, cool temperatures may shorten the time it takes for honey to crystalize, with temperatures around 57°F (13.9°C) is considered optimal for creating creamed honey within about two weeks from liquid honey seeded with crystals. As discussed in last month’s Bee Culture article on Raw Honey, crystallization is the natural process of glucose sugar molecules aligning into orderly arrangements known as crystals. It is not an indicator of spoilage, impurity, age or quality. If temperatures get too cold however, crystalized or creamed honey will form light colored patches on the exterior surface where the honey touches the container. The discoloration is caused by sugar crystals that separate out from the rest of the honey. While cosmetically unappealing to some, the discoloration does not affect the quality of the honey in any other way.

Honey can be kept in freezing temperatures to preserve its liquid form. Since there is so little moisture in ripe honey, it does not freeze solid. In fact, old editions of Gleanings in Bee Culture (the initial tltle of this magazine), talks about using honey mixed with a little water as antifreeze in car radiators. Since honey has a considerably high boiling point, it will not evaporate thus making it beneficial as a coolant in the Summer as well. Honey is a more expensive, but much less toxic alternative to the antifreeze/coolant in common use today. Even today some brands of antifreeze/coolant include some honey as a thickening agent and to coat the lines it runs through to help protect them from heat and cold. When exposed to heat however, the pH of honey increases, darkening of the honey may occur, and levels of Hydroxymethyl furfuraldehyde (HMF) increase. Ideally, honey should be stored in a dark place at room temperature such as a kitchen pantry or cupboard. 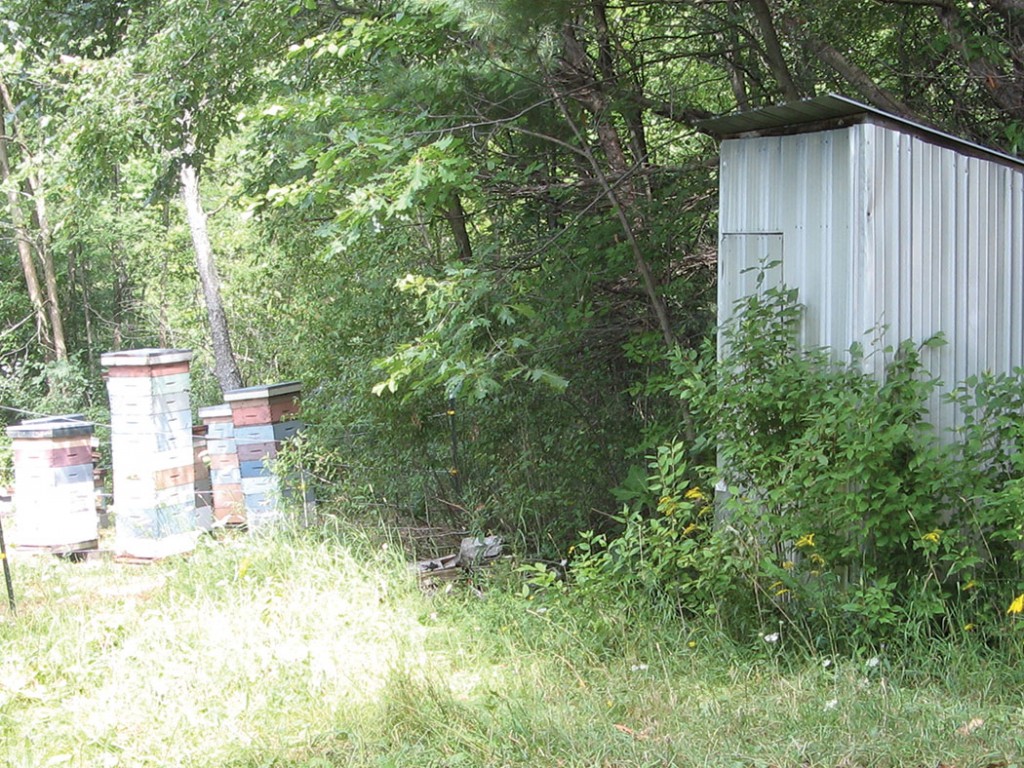 A small shed by the apiary makes a convenient place to store empty supers and equipment that is not in use.

Drawn honeycomb is an incredibly valuable resource for both the bees and the beekeeper given that it takes approximately eight pounds of honey for the bees to produce one pound of beeswax. Delicate frames of comb that have been extracted need to be protected from damage from wax moths and small hive beetles. The best way to store combs and keep them safe from pests is to keep them filled with bees. Following extraction, I like to place supers filled with sticky frames of comb on top of the inner covers (and under the outer covers) of strong hives. The bees will come up through the hole in the inner cover, clean up the honey residue on the combs and patrol the space keeping out pests like moths and beetles. Once the cold weather sets in, the supers of empty frames can be stored in an unheated out building for winter. Placing the supers flat on the floor of the building in a stack with a queen excluder, or outer cover on top will keep the mice out.
Some folks will simply stack the recently extracted supers out near the bee yard and let the bees rob out the honey residues. This approach can lead to robbing pressure in the beeyard and problems if there are hives that are not strong located there. Small operations may be able to freeze empty combs to kill all stages of moths and beetles in the equipment prior to storage, while large operations may choose to fumigate with chemicals or a gas such as carbon dioxide prior to storage. Not enough room to store all those empty honey supers during Winter? Some beekeepers will erect a small shed out in their bee yard and store their equipment there. Urban beekeepers may simply place a large padlocked box or container in the bee yard to hold extra equipment. This solution not only gets the equipment out of garage, honey house, or living room but places it near where it is going to be needed next season.
Since wax combs become brittle in cold temperatures, it is best to place the combs in storage prior to the onset of freezing temperatures and not move them until spring (the same is true of frames of foundation). If combs must be moved during freezing temperatures, extra care must be taken to prevent jolts to the combs that could induce cracking or breakage. By the same token, thought must be given to the amount of heat the combs will be exposed to once in storage once the weather warms up. Temperatures of about 145°F (62.7°C) will cause wax to melt, while temperatures well below the melting point can cause combs and foundation to warp, sag, or bend. Adequate ventilation is the best defense against overheated combs stored in any building that is exposed to the sun. 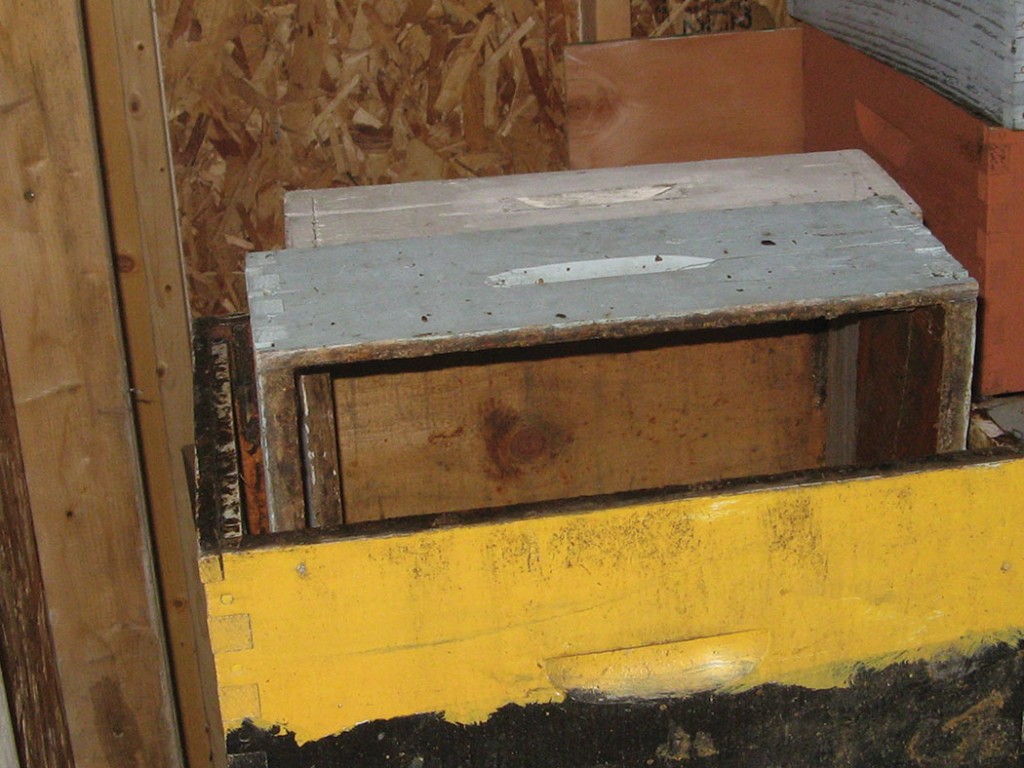 To maximize your storage space, fill hollow or empty items such as stacks of empty supers or hive bodies with additional supers, or empty honey tanks with smaller honey tanks, uncapping knives, uncapping forks, hoses, clamps, and other small pieces of uncapping equipment.

A lot of beeswax and propolis may be collected as a by-product of the honey harvest. Burr and brace comb from frames, cappings wax, burr comb scraped off the inner cover, and broken frames should all be collected and saved during the honey harvest. Propolis can be separated from beeswax and other debris such as pieces of wood, by soaking the scrapings in water. The wax and wood will float while the propolis will sink to the bottom of the container. Propolis can be simply dried and stored in a jar. Wax cappings and scrapings can be stored in most any sealed container, however if wax moth eggs are mixed in with the wax the larvae may consume significant amounts of the wax. To be safe, it is a good idea to render the wax cappings, broken combs and scrapings prior to storage by melting them down. Once melted, the wax moths will not be interested in the wax. A solar wax melter is my favorite way to melt down cappings and scrapings as it takes little of my time (the sun does most of the work) and most of the dead bees, old cocoons, and other debris mixed in with the wax is removed by the solar wax melter, making the final filtering faster and easier, and therefore a more pleasant task to accomplish. Beeswax that has been melted down does not need any special attention and can be stored in most any container or even just left out. About the only thing that will bother with melted wax are mice or rats, and then only when there is little else for them to eat and they have no other choice.

The final item you will be storing following the honey harvest is your beekeeping and harvesting equipment, extractors, honey tanks, uncapping tanks, etc. The better the equipment is cleaned up following the harvest the easier it will be to clean and prepare everything when harvest time rolls around next year. A high-pressure hose and some very hot water will quickly take care of most of the mess on the extracting equipment. The hardest part of storing equipment is finding an out-of-the-way place to store everything so that it is not in your way during the rest of the year.
While urban beekeepers will tend to have the biggest challenges when it comes to storage issues, making sure there is room to store everything related to one’s beekeeping activities is something that all beekeepers must contend with. While storage issues become more challenging the larger one’s beekeeping operation grows, planning ahead and being creative can help you close the end of the season with a place for everything and everything in its place.

Ross Conrad is the author of Natural Beekeeping and is frantically working to close in his honey house and put up a small shed in order to securely store his beekeeping equipment before the winter snow starts to pile up. Look for Ross at the Carolina Farm Stewardship Association conference in Durham November 6-8, and at the Florida State Beekeeper’s Association meeting November 20-22 at the Omni Resort at Amelia Plantation, Amelia Island, outside of Jacksonville.