The Sustainable Honeybee Program (SHP) had its origin with a queen-rearing project back in the late 1990s. 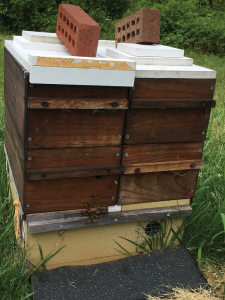 Two colonies, side by side, coming out of the Winter before the spin-around procedure. The weaker of the two colonies will be put onto another base and moved away.

A location in rural Virginia offered good bee forage from February until frost in late October. I searched for and found Drone Congregating Areas to the northwest of the beeyard. Although this project was successful, over the years I realized that education of beekeepers was of primary importance.

Today the Sustainable Honeybee Program is a 501c3 organization that recruits volunteers who wish to become educated beekeepers. The purpose of SHP is develop, educate, train and empower beekeepers to keep their bees enjoyably, successfully, sustainably and stress-free. To put it simply, today SHP is a purely teaching operation where any development of equipment or supplies is secondary. The work is done by volunteers and interns who all wish to improve their skills as beekeepers. 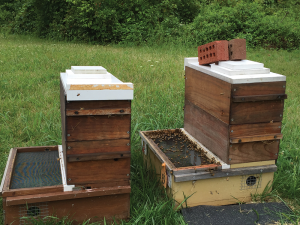 The colony on the left will be moved several feet every few days to a new location or taken to an outyard. The divided bottom board can be seen.

We had been very fortunate that since 2006 we have not treated any colonies with a commercial manufactured treatment, especially a Varroa miticide. Until the winter of 2014-2015 we were running in the mid 90% survivors of all colonies and we were feeling very good. However, as Henry Wadsworth Longfellow wrote “into each life some rain must fall,” we had a series of problems – a significant bear attack coupled with a management error during the winter of 2015-2016 left us with 19 colonies out of 24 before the winter. The queen-mother colonies were lost during this time. We had to develop a plan for a rapid recovery of all our colonies, not just using the ordinary split, split and split.

Since SHP is primarily a teaching and developing operation I, along with the interns and volunteers, put in place a program called the Spin-around Queen. To develop this program everyone gathered at the local café and after multiple cups of coffee and scribbling on napkins, the way to recover using the queens still available was created. We called it the Spin-around Queen and here is how we replaced the colonies. 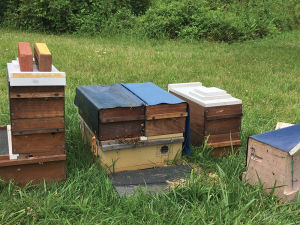 Light blue drape covers the original lower body. Dark blue covers the empty body into which the capped brood will be placed. White top is on the original upper body sitting on an empty body to keep it off the grass. Pink box with blue cover contains the frame with the queen to keep her away from harm during manipulations. Open brood and the queen will be moved into the hive body with the light blue drape.

The equipment to develop the program used five-frame medium-depth nucs.  The bottom board is screened and is divided so that two colonies can be set next to each other with entrances facing opposite directions. The tops used are not telescoping covers but are similar to migratory covers, allowing the nucs to fit closely next to each other. In addition there is an opening in the top for a syrup feeder.

Next select the weaker of the two colonies and place it on its own screen bottom board about two to three feet away. If this colony is to remain in the apiary it can be moved a few feet every three or four days. It can also be moved to an outyard or other location. This weaker colony will not be used in making the Spin-around Queen.

Now the empty hive body that had been placed on the bottom board next to the original colony will be filled. Remember, its entrance is opposite that of the original hive next to it. (There is the source of the name ‘Spin-around Queen.’) First a frame with both pollen and honey will be put in position opposite to the original hive remaining on the bottom board. Search for and select frames with eggs and larvae. Minimize any capped brood where varroa may be hiding. If the frame with the queen also has clinging nurse bees or empty comb, transfer that whole frame. If she is on a frame with capped brood, transfer only the queen. If a fifth frame is needed, add one having only mostly open cells, but no capped cells. 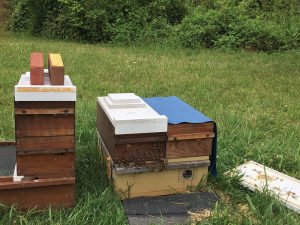 The majority of the capped brood is in the hive body with the white top. Field bees are seen returning from foraging.

Place a small (2X2-inch) piece of pollen substitute patty on top bars, Put on the cover and a feeder with 1:1 sugar syrup. This hive body has no guard bees or foragers.  However it contains the queen from the original colony, next to it. Thus, this queen is now the Spin-around Queen because her colony now has their entrance facing a different direction from the colony she came from.  Close this entrance for 24 hours. Then install a robbing screen and allow bees to fly. Leave this new colony alone for two whole days to organize and develop its guard bees and foragers.

This nuc, with its capped brood, is now a reservoir of varroa. To rid it of these mites, a break in the brood cycle will be performed. In the original nuc, next to the new one with queen, place a pseudo-queen (TempQueen Queen Pheromone, Betterbee item QP1) inside, since it does not have a real queen. The queen pheromone strip allows this colony to think it has a real queen for up to 21 days if necessary. 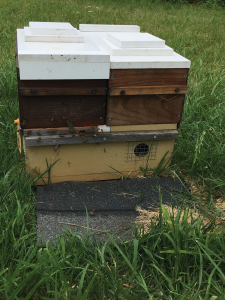 The right-hand box, now containing the original queen, will
receive a feeder and robber screen.

To give the nuc that brood break, a real queen will be present later. If a queen cell introduction is desired, do not put one in for nine days. If a caged queen will be used, introduce it after fourteen days. In either case remove the Queen Pheromone strip when installing either queen cell or caged adult queen.

With the Spin-around Queen method the SHP was able to increase colony numbers 60% during the first season. After two years of using this method it appears that an 80% increase is possible.

With some modification, other equipment, such as eight-frame and 10-frame, can be used. These sizes of hives would not use a divided screen bottom board but individual screen bottoms. The original hive is not moved away but a five-frame nuc is set next to it as the Spin-around-Queen nuc that will be expanded to a complete colony. Making the Spin-around-Queen nuc gives that nuc a break in the brood cycle.

With the Spin-around-Queen system beekeepers can increase colonies, requeen with queen cells or a purchased queen, and have a break in the brood cycle for Varroa control.