Losing Too Many Hives

Here’s an admission: I have been complaining a lot about urban beekeeping lately. For my first six years, I never lost a hive, in part because there just weren’t very many of us then, in part because I had the good fortune (pure luck, actually) of replacing a package queen early with a Kona Carniolan sold to me by EAS Certified Master Beekeeper Bill Troup. That line has survived my many mistakes since 2005. But here in Washington DC, where we got a late start compared to New York, Chicago, London, San Francisco, and (insert your city here), we are now just about equally as dense, and I lose a lot more bees these days. In previous articles, I have emphasized how this makes raising the bar on management decisions, especially for newbees and those hypnotized by Internet promises from completely unrelated environments, much more difficult and important. It is not all thorns among the roses, however (or should I say asters, which are far more useful to honey bees).

In the cities, we also have access to major universities with impressive science labs that are often better funded for pollinator research these days. Being in the MidAtlantic, in this column I write alot about the vanEngelsdorp Lab and the BeeInformed Partnership at the University of Maryland/College Park, as well as our invaluable neighbors at USDA/ARS Beltsville. Though at least one entomologist at one of these centers was once advised to go run a couple of hives before designing experiments and management recommendations for us, the great beekeeper unwashed, I am afraid that the idea for the  program described here belongs completely to Dr. vanEngelsdorp at UMD. It depends, however, on the closeness of the beekeepers downtown, in both geography and community.

We have used these advantages before to organize a city-wide Swarm Squad that assigned an excited beekeeper to every single swarm (that didn’t skip) last season within an average of 20 minutes­–and which put up with many calls for Carpenter bees, yellow jackets, and bald faced hornets, as well.

This winter, we are working on a herd health approach to Varroa control. Dr. vanEngelsdorp told us about cattle diseases in the Midwest that had been contained by region-wide vaccinations of herds. There are also examples of Foot and Mouth Disease control in the EU handled in a similar fashion (where, like honey bees, diseases of managed stock were leaking into wild populations). Perhaps in a contained space such as an urban center, we actually have a shot at a similar approach. There are over 200 registered hives in DC right now, though, which indicates we probably have between 300 and 400 managed colonies stashed around.

So, the DC Beekeepers Alliance has made wintertime oxalic acid fumigation a benefit of membership, and we allow beekeepers in town to both pay ($15) and sign up for a visit on our web site. We flog this on our social media and in our meetings. One of our members, Jan Day, has developed experience with a few dozen hives and has been creating methods and measures for application. We have only fumigated 30-40 hives so far, but with the publication of happy photos of beekeepers all over town, in widely different apiary settings, more and more candidates trickle in. We would like to hit 80% of colonies in order to get a recordable benefit, but this is unlikely to take place in our first year, until rhapsodic reports of healthy fumigated hives (we hope) ring in the ears of folks with year-on-year losses.

We are using lessons learned from the Swarm Squad to organize ourselves. While in our early phase we can only go to the relatively small number of early adopters spread all around, we will eventually organize large groups, and take on one neighborhood at a time on a Winter weekend day. The beekeeper is given a time, and must be there. Not advertised publicly and with permission, we will also fumigate all hives in a shared apiary, even if one or some belong to a non-member. Drift is just too much of a fact.

We chose cold weather oxalic fumigation as our method based on recent studies that indicate that popular miticide applications during the brood cycle (Gregorc, Adamczyk, Kapun & Planinc, 2016) have limited effectiveness. In our region, July and August temperatures (considered the recommended post-harvest window for treatment) are also too high for many widely used treatments for weeks on end. 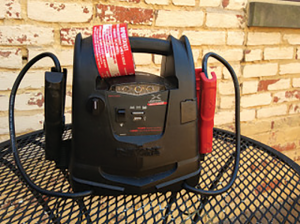 The car jumper that worked.

There were considerable lessons and practicalities for the community fumigation program to overcome. Urban hives are often on garage or townhouse roofs, and Jan had been stringing 30-foot lengths of jumper cables from her car to get to some eager apiaries. It was not clear that we could get to herd health without better access. Initially, our club purchased the same portable car jumper that you can see in the Honeybee Health Coalition videos (http://honeybeehealthcoalition.org/Varroa/), which is a Black and Decker, and which for us failed right out of the box (yes, we followed the charging instructions. The thing is actually manufactured under license in China, and has about as much relationship to their usual quality standards as my dog’s squeak toy. I also ordered it from Amazon and could not return it). Next time out, I went to Home Depot and bought the no-name (to me) version pictured here that apparently does not enjoy enough brand recognition to be sold for profit to a manufacturer that otherwise produces flammable hoverboards. I tested it on my back porch (and jumped my husband’s 40-year-old Mini Cooper) before trying that again. It certainly took a charge, and we did 15 hives in six apiaries during Weekend One. I think we should now spend the money to buy one that could jump a semi, and go absolutely wild.

We discovered that our two fumigation wands required somewhat different periods to heat effectively and vaporize the oxalic. This caused concern about battery life versus number of hives: we perceived that jumping a car usually does not require a sustained charge over five minutes over and over, and we wondered whether our equipment was a good fit for longer applications. The first time we did multiple hives (13 at the Franciscan Monastery in Brookland) it also took about 20 minutes per hive as we wrangled the woodenware into the right configuration (entrance reducers out, bottom board inserts in) and figured out the timings for heating and vaporization. 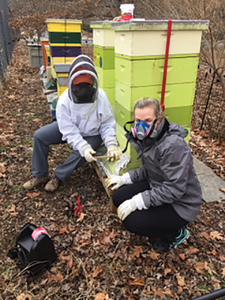 We have since told all members that they must have their equipment ready ahead of time, and per-colony timing has been halved. A checklist of all required fumigation equipment would have been helpful the first time out (can you believe that I forgot the oxalic?) and at least two applicators plus the beekeeper speeds the course. We have the experienced person (Jan) explain, set up, and perform the first vaporization, with the owner beekeeper at her side as helper. Both are in an N95 (or better) rated mask and wearing gloves! I think goggles are a good idea, but they didn’t get much traction. The third person (me) stood away using a cell phone stop watch app as a timer, calling out relevant intervals (every 30 seconds or so. For us, it took about two minutes to achieve required heat, maybe three minutes to guarantee that all the oxalic had burned off, and five minutes of chewing the fat before removing the towels blocking the entrance, and replacing the entrance reducer). It is hard to be understood while wearing the mask, so I stood 10 feet or so away, upwind. I was also usually just able to smell when the burn started from this position (maybe not too wise), and to inform the team. Where there were additional hives, we cajoled the owner to manage the wand the second+ time. We want lots of beekeepers to feel empowered to do this. 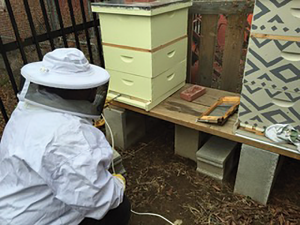 Chandra Harris vaporizes her own hive.

We wonder whether we have what it takes to scale all the way to 300 colonies, and whether we are collecting enough or the right kind of data to measure effectiveness. The BeeInformed folks mentioned that grant funding might help. We have never done that before, so that’s something more to learn.

But what we really want to say is, despite my habitual doom and gloom lately, this is something highly positive that we can try because of the assets and proximity characteristic of a large urban area. One neighbor club in the suburbs is making noises about trying it, too. There is joy in visiting a lot of living colonies in January. Maybe, if we get somewhere with this, we will finally find the time and the teamwork to get going on breeding local survivor bees, on getting our neighbors to knock it off with the ineffective mosquito sprayings, and drowning their expensive cultivars in neonics – on huge honey harvests that make the public (and our friends and families) fall in love with bees all over again! 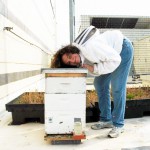 Toni Burnham keeps her bees and helps educate and mentor local beekeepers in the DC area.