We unearthed the bees a couple of weekends ago. Well, unwrapped them actually. I learned winter in northern Wisconsin and it stuck. I’ve always wrapped in winter here in Ohio. Some years not needed at all. Some years wish I’d added another layer. 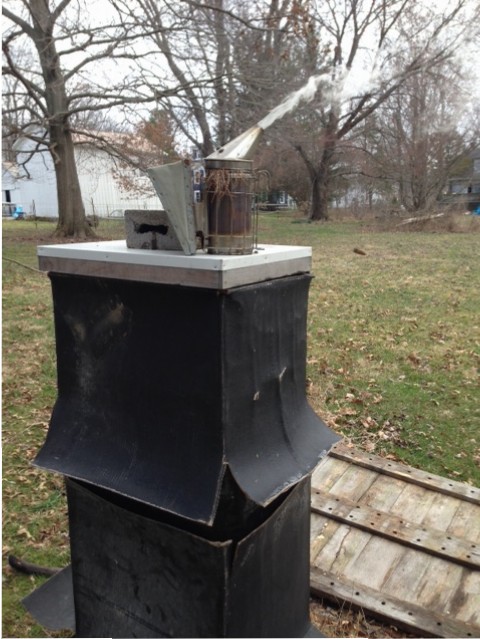 The first shot shows where I started this weekend, or where I ended last fall. You can see the large pallet lying on the ground behind the colony. That’s an additional wind block on the north side of the wrapped hives. I use them every year because every hive has some sort of wind screen. The black boxes on the hives came from Mann Lake. They are those very heavy, corrugated, water proofed, collapsible boxes that are about 2 deeps tall, and as wide as a 10 frame box.

My bees go into winter in 4 or 5, 8 frame mediums. Taller than 2 10 frame deeps by almost half. So what I do is wrap the top boxes in that plastic-on-one-side-and-insulation-on-the-other-wrap I get from B & B Honey. It comes in rolls, or individual sheets big enough to wrap a 10 frame box and deep enough for two deeps. I wrap this on the top of my stack fastened with a staple gun. Then I slide one of the boxes over the top and bring it all the way to the bottom. 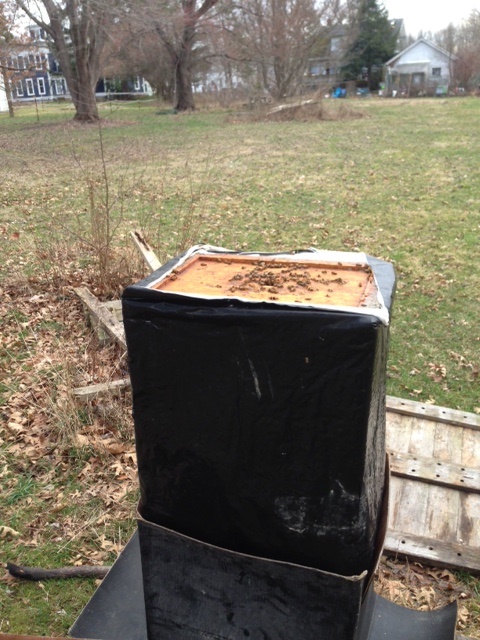 Photo 2 shows a stack with a cardboard box on the bottom and the plastic wrap on the top. When the top box is added the top flaps are simply folded down over the inner cover, not allowing snow or rain in, but lots of air movement up and out. The cover sits on top of the flaps, with bricks to hold it down and that’s it. The flaps cover the front entrance on the front, but leave the sides open for easy in and out on those warm days, and there’s an entrance reducer so there’s air movement for ventilation, but not over-done. I also have screened bottom boards that are about three-quarters shut so there’s air in the front and back and good ventilation all winter. So all I had to do last weekend was remove the top box, the bottom box and finally the plastic, exposing the colony.

Photo 3 shows what I found when I opened those flaps on all 6 hives, well, 5 of them had wraps since one lives on a very protected front porch all year. Bees bubbling out of the inner cover hole…I can imagine them stretching, yawning, blinking a bit at the light, and glad that spring has sprung. That there were this many bees this close to the top isn’t surprising with the way I wrap and the amount of honey we leave. There’s two, 8 frame medium boxes left on every fall for food stores, and that’s where the bees are every spring. The 2 or 3 boxes on the bottom were a mix of brood and honey in the fall, and eventually everybody moves toward the food above. I checked each hive, and everyone had at least 10 frames of honey in the top two boxes, and a couple still had some in the third box down, but not much. 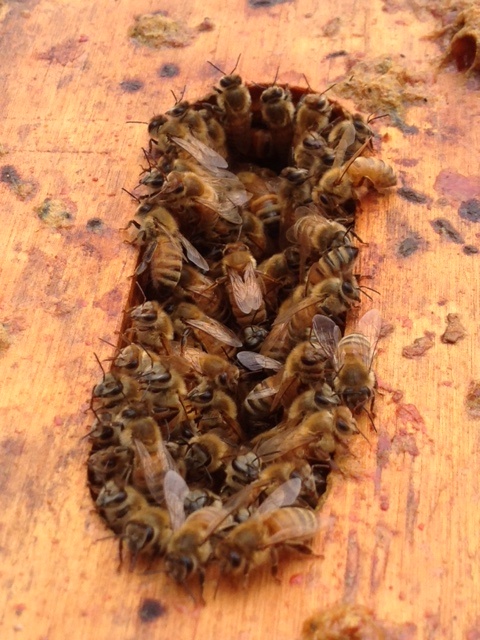 I added a pollen substitute patty to every colony, closed them up and will wait until I get a warmer day and more time to remove the empties below and get them ready for the season. Like I like to do every spring I took a 5 lb bag of protein powder, this year from Joe Latshaw, put it in a 5 gallon pail facing south east with the opening protected from the wind and rain for the bees to collect. They like both…the patty and the powder because they can store the powder, but they eat the patty and either use it to beef up their own bodies, or turn it into brood food immediately and feed the kids. They need both it seems, and watching them dive bomb into the dust and come up covered is always a show.