An interview with Randy Oliver

Randy Oliver is the owner of Golden West Bees in northern California – about 1,000 colonies providing migratory pollination services for almonds and producing nucs and honey for sale. 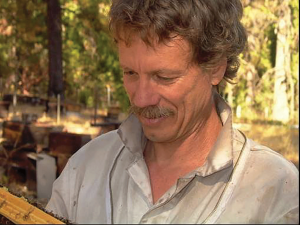 But he is much more widely known as the voice of ScientificBeekeeping.com website, which he started as a place where he could give beekeepers an objective, understandable look at new research coming out in the scientific journals.

This year Randy turned 65, so he says he is turning management of the apiary business over to his sons Eric and Ian, although he will still keep his hand in as “in-house advisor.” That doesn’t mean he will be backing off from his research projects or from his assessments of new research and technology for the bee industry.

Randy grew up in a home that “abutted the rich wildlands surrounding the Upper Newport Bay in Southern California – an ideal place for a budding biologist.”  By the time he was in high school, Randy was also apprenticing after school to a sideline beekeeper who ran several hundred hives. 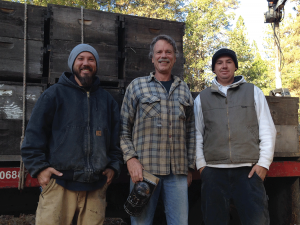 Randy Oliver and his sons.

He went on to college at the University of California Irvine, at first in marine biology, but then shifting to entomology. At that time, he was keeping a few hives as a hobby, but Randy was not yet seriously into bees. Instead, he was working nights, weekends, and during the Summer at restaurants and construction to pay his way through college.

“Then toward the end of my undergrad work at U.C. Irvine, the Dean of Biological Sciences offered me a dream job – to establish a world-class insectary from scratch. In doing, so I learned to deal with the challenges involved in the mass production of insects for research,” he explained of earning a graduate degree in the biological sciences. “Still fascinated by my bees, I applied to U.C. Davis to earn a PhD in apiculture, but was talked out of it, since there were no prospects for employment in that field at that time. Disappointed, I decided to turn our beekeeping hobby into a business.

This makes ScientificBeekeeping.com a natural outgrowth of Randy’s twin tracks in life: training as a biologist and his love of beekeeping that first began as a young teenager when he collected a swarm from a bush outside his home. His first foray into writing came much later in 2006 when a beekeeper friend Keith Jarrett became apoplectic about some of the nonsense being promulgated on Bee-L about almond pollination. He implored Randy to write an article for the bee journals to set the record straight.

“I did it, and my life was forever changed,” Randy said. “There was apparently an unfilled niche in the beekeeping community for a bee biologist who could accurately translate science into lay terms, and who also enjoyed the credibility conferred by actually making his living by keeping bees.”

Randy also began writing regularly for the American Bee Journal in 2006 and soon after www.Scientificbeekeeping.com was born.

Today, nearly 30,000 people from nearly every country in the world visit ScientificBeekeeping.com each month. Randy is known not only for his summaries of scientific papers as they are published or his own research projects but also for his outspoken, take-no-prisoners evaluations of the quality of research and his willingness to point out fashion flaws when someone in the parade isn’t wearing any clothes.

In turn, Randy has also been accused of being in the pocket of big ag or pesticide companies or only being on the speakers’ circuit for the money. Yet Randy is the first to tell you he doesn’t run ScientificBeekeeping.com to make a profit; he plows the donations he gets right back into research into what may make bees healthier. He points out that with even one-day speaking dates, he’s usually on the road for at least three days (plus prep time) so he says he’d earn more just staying home and putting that time into his bees.

Evidence, facts, conclusions based on repeatable data;  that’s what Randy is looking for when it comes to getting on board a bandwagon for causes of all of the honey bees’ problems these days. He is not about to be stampeded aboard without that evidence, those facts. And that’s where the fun begins.

“I’ve gotten it from the anti-evolutionists, the fearful anti-GMO activists, and the anti-neonic zealots [because he won’t support their position/cause as the sole or primary source of bee losses]. “Single causers” are counterproductive – the focus on neonics has diverted research away from Varroa, nutrition, and the impacts of other pesticides. Of course, some make the ridiculous claim that I must be getting paid by this corporation or that, which is ironic, since I am the most anti-corporate person you will ever meet,” he explains.

Randy speaks of graduating high school in 1969 in southern California, right at the peak of the hippy and environmental movement, both of which were profoundly influential in his life and after college, going “back to the land,” moving to a cabin deep in the Gold Country of the California foothills with wood heat, carrying water, growing his own food, and loving it. With a devotion to environmentalism, he became one of the first local promoters of organic agriculture as proprietor of a farm store in Colfax, in northern California. Not quite the model for a corporate suit.

“Probably the biggest issues – have been my questioning that the neonics are the cause of all bee problems, and my pointing out that there is virtually zero evidence supporting small cell. I’ve been called by some in industry leadership “the most dangerous beekeeper in America.” Mention of my name or website was banned by one group in California. Several years ago one industry leader, with whom I have an amicable relationship, asked me what it would take to win me over to the anti-neonic camp. I replied, “simple – one solid piece of evidence,” Randy said. “I’m still waiting for that single piece of evidence.  There are clearly issues with the neonics, as there are with any pesticide. But I’ve yet to see any convincing evidence that they are the cause of either Colony Collapse Disorder or elevated Winter mortality.”

While Randy builds his evaluations from a structure of unassailable scientific studies, he’s not looking for other people to ride the coattails of his conclusions either just because he says it is so. He encourages everyone to think for themselves, to keep an open mind and pursue accuracy. Then based on the information they’ve found, he wants them to test it out, see what works in their bees, in their yards.

Beyond that, he warns fellow beekeepers to be cautious about latching onto the results of any single study. Randy thinks most individual studies are blown out of proportion, either by the media or by groups whose cause that study supports, as long as it is only considered in isolation. Always check the facts, is more than a mantra for Randy, it is a way of life and a doorway.

Overall though, the huge amount of media attention that has come to honey bees in the past years has probably been a good thing.

“It has helped bring the public’s attention to the fact that human impacts are seriously hurting pollinators, wildlife, and ecosystems worldwide. The bad thing is that many groups are using the honey bee as their poster child for fundraising purposes. I’ve supported environmental groups all my life; I am a Life Member of the Sierra Club, and donate thousands of dollars to the Nature Conservancy, the Pollinator Stewardship Council, and other groups. At the same time, I am often highly critical of these same groups if they do not base their actions on good science and truthfulness,” Randy explained.

“What I’ve learned is not to trust anything in the media without going deeper, much deeper, to check facts. Always ask any writer what they are being paid to do. A journalist is paid to write eye-catching headlines, an advertising consultant for an environmental group is paid to bring in donations (generally by fear mongering, rather than sticking to the facts). A corporate executive is paid to sell product and assuage the public’s concerns about that product. I see little difference between the truth stretching or outright lies done by (some) environmental groups or by the chemical company PR spokespersons, although the chem companies will quickly get nailed for any lies. I often spend hours checking claims by either,” he added.

Which brings us back to the calumny that may irritate Randy the most: that he won’t add his voice to the call for a ban on neonicotinoid pesticides or at least support the stance that neonics are the principle cause of honey bee problems because he is on payroll of pesticide companies.

“I consider that unfounded accusation to be a reflection on venality of those who make the charge. That said, I’ve studiously avoided taking any money from any Big Ag company, with a single exception. I had worked with the independent startup Beeologics for two years in developing an RNAi antiviral product for bees during the CCD epidemic. To my surprise, Beeologics sold to Monsanto, and then asked me to run another trial with them,” Randy explained.

Before he would agree, Randy demanded several conditions: 1) That he would get ALL of the raw data from the control group and 2) he would have their permission to share all of the data with the beekeeping community. It was an effort for Monsanto’s lawyers to agree.

“For only that single trial, I charged and was paid for our time and lost hives. Since then, I have really pissed Monsanto off by submitting a formal comment to EPA on the need to carefully regulate RNAi products,” Randy pointed out. “What people like that just don’t realize is that I take no fixed positions, and I am always ready to change my opinion on any issue the moment that any evidence indicates I should. I plan to write soon about my current assessment of the neonics, based on recent research findings.”

It would be easy to play to the crowd, and jump onto one of the anti-GMO/neonic, top bar hive, treatment-free bandwagons, according to Randy. “But I’m not concerned with popularity, and indeed have referred to some outspoken proponents as the “beekeeping Taliban” – a felicitous, but appropriate eponym, which I borrowed from a European bee inspector. What I hoped to do was to get them to question their own attitudes of self-righteousness and willful ignorance,” he explained. “Unfortunately, not all got the point. I understand that they have the bees’ best interests at heart. After speaking to many groups, members of the audience come up to thank me for helping them to realize that they needed to rethink their beliefs. That makes me happy – not that I’ve necessarily changed their beliefs, but that I’ve got them thinking rather than parroting.”

If Randy directed a great big honey bee research budget, here’s how he would spend some of it.

Kim Kaplan is a freelance science and business writer/photographer.