The city of McKinney, Texas, is north and a tad east of Dallas and sits smack in the middle of Collin County.

That’s the county that John Talbert lives in and where the Collin County Hobby Beekeepers Association regularly meets. And I traveled there last June to visit John, and meet all those fine Texas hobby beekeepers. 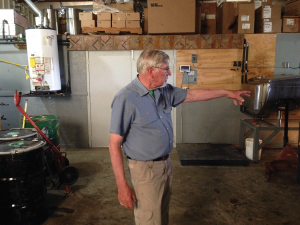 John, however, isn’t quite a hobby beekeeper, since he and his son Skip (actually his name is John, too), run the family owned Sabine Creek Honey Farm in Josephine, on the far east side of Collin county. John and his late wife, Lavada started Sabine Creek Honey farm 30 some years ago. John’s a UT grad in Facilities Engineering and Management, very useful skills when running something as dynamic as a beekeeping business. He’s also active in local and state beekeeping associations, and very active in the Texas Beekeepers State Fair operation.

Skip is retired military and specialized in project management and administration and is now Operations Manager for the business. He’s a Northwestern State University in Louisana grad in Business 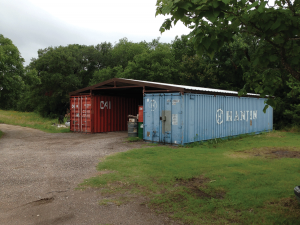 A unique outdoor storage area – two shipping containers and a roof between them.

Administration and works alongside John at the Honey Booth at the state fair. He has working with him John’s grandson Justin, who’s returning to the operation after working out in industry. But combined, their skills complement each other and cover a beekeeping business pretty well.

Like most commercial sized operations the number of colonies they have at any one time depends on what’s going on. They average about a 30% loss every year to Varroa and it’s evil ways, using Apivar to treat. They shoot for having about 800 colonies on hand, in one place or several all of the time. They send 400+ to California almonds every spring, working with Denise Qualls at Pollination Connection as a broker. John and Blake Shook team up when sending bees out west, and Denise doesn’t have any problems with entry into California – which can be an issue when coming from Texas because of some of the ride-alongs that often accompany Texas beehives. Both John and Blake bring strong colonies she says, bringing colonies that grade out at eight frames average or better. The bees go to a variety of orchards in Stanislaus country, or as part of those that go to a 1500 acre orchard in Waterford. Once located they take a day to get settled, then Denise’s crew and country ag inspectors go and inspect the colonies, looking for issues that might occur during transit. They spend essentially no time in holding yards sitting on the ground in California. They leave strong, and arrive strong.

When the bees come home they’re full of almond pollen and almond honey, and lots and lots of bees so to relieve all that stress and compact living it’s Nuc time, and Sabine Creek makes up about 600 every Spring. There’s acres and acres of wild flowers stretching to the horizon around John’s home and business and it’s a holding yard to die for.  It’s a hectic, almost frantic time, but when it’s all done it’s time to make honey. And Sabine Creek makes honey as sweet as Spring Sunshine, and they’ll tell you that on their web page and lots of their promotional material. It paints a bright, tasty picture. 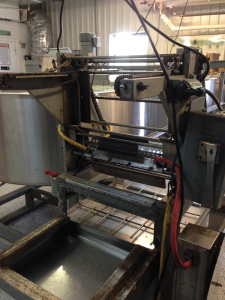 When the bees return there’s some pollination work in local cucumbers, water melons and squash, but most are located in distant yards for honey production. A honey production bee yard consists of 64 colonies on pallets, and they are producing from March-ish after the loads return from California and are split to July-ish when the honey flow is essentially over. Honey removal is done with fume boards and one ton flatbed trucks. It takes the crew a half day to harvest a single yard. You can do the math on how long it takes to get the crop in. Once the honey is harvested colonies are reduced to double deeps and each is fed with both wet and dry protein and a three gallon bucket of syrup.

A Cowen uncapper removes cappings and some honey and drains into a tank with an auger that moves this slurry to a Cook and Beals wax separator in the next room where the honey and wax go their different directions. The honey is heated, strained, and run into barrels, and the wax is thrown onto the sides of the separator essentially dry and is collected as wax flakes. 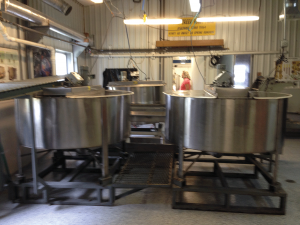 Uncapped frames are moved to the three Dadant extractors (two 84 framers, one 60 framer), spun and the honey from all three is collected in a holding tank, pumped through a heat exchanger, strained, and run into barrels.

Sabine Creek has nearly 80 wholesale customers in a variety of outlets that handle their retail sized containers. They make up 8 oz., 12 oz., 1 lb., and 2lb., in glass and plastic and 40 oz., 5 lb., and gallons in plastic. They also sell bulk, wholesale to resellers in pails.  They sell good quality beeswax from their cappings (delete and old combs, only capping wax is used.  Too much possible bad stuff in old combs.  We burn them.) in a variety of sizes to walk-in customers. 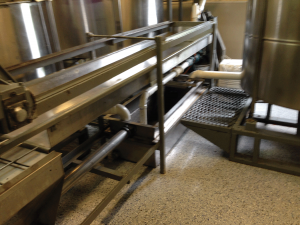 John is the face of Sabine Creek at both the nuc sales in the Spring and meeting, delivering to and helping customers. Skip handles the day to day operations and is the Chief Operations Officer (he does most of the work he told me, but I think John helps out a bit).

But that’s not all they do.

Every Spring in the honey house John teaches beginning beekeeping classes. His classes include lectures and hands-on experiences. There are five, four hour classes, and he has both bees and equipment for sale during the class. The classes are scheduled for Saturday mornings once a month, and for the fifth month there’s an outside session. He allows 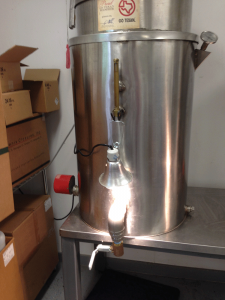 only 25 people in a group so the classes are small enough that everybody gets all the attention needed. A fee of $185 covers a single person, or an additional $145 for family members, plus a beginner’s text book and a one year family membership in the Collin County Hobby Beekeepers Association. He runs at least two sessions a year, with some years as many as four sessions, mornings and afternoons.

But that’s not all they do, either.

John is a past president of the Texas Beekeepers Association, and is Executive Secretary of the group now. He’s also the Treasurer of the American Honey Queen program, with the American Beekeeping Federation. And both John and Skip are very involved in the State Fair of Texas, associated with the Texas Beekeepers Association. That’s a story in itself.

The fair runs for 24 days, beginning the last week of September every year. It hosts about 2.5 million people during that time and is one of the biggest State fairs in the country. The Texas Beekeepers have several spots occupied on the grounds starting in the Food and Fiber Pavilion. Over the course of the fair they use up 125 – 150 volunteers doing presentations, working with the Texas and American Honey Queens, distributing National Honey Board materials, videos ongoing continuously.  They sell honey in the Go Texan store and have a honey show, cooking with honey, black jar tasting contest, plus beeswax sculptures, youth entries, paintings, photography all in the Creative Arts Section. Volunteers at the Food and Fiber Pavilion Honey Booth and at the observation hives in the Texas Discovery Gardens Butterfly house are all well trained and current on the beekeeping industry, and there are a host of special events with the Honey Queen and Princess during the fair.

Both John and Skip are involved during the whole of the fair so beekeeping work at home needs to be pretty much done by the middle of September. But with harvest in July this schedule works out fairly well for the operation.