Did anyone ever tell you ‘you are what you eat’? 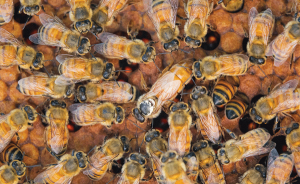 There is no creature for which this is more true than the honey bee. Amazingly, queen bees are genetically exactly identical to worker bees. But they’re fed a different diet from worker bees their whole lives, from the time they are tiny larvae, until the day they die. This different meal plan causes their physiology and behavior to develop completely differently from worker bees, despite the same genetic foundation. What is this magic food? It’s not broccoli! It’s the aptly named substance, royal jelly.

What is Royal Jelly?

Royal jelly is a protein-rich excretion from the glands of worker bees – I think of it as a honey bee’s version of mother’s milk. While all larvae are fed royal jelly for the first three days, of life, larvae chosen by the worker bees to become queens are bathed in royal jelly in special, elongated ‘queen cells’ throughout their development. After the larval stage is complete and the queen bee emerges, she is fed royal jelly throughout her life.

Queen bees are up to 1.5 times the size of worker bees, and live generations, are sexually mature (unlike worker bees who cannot mate), and have a totally different set of behaviors from the other bees in the hive. When a hive needs a new queen, it will select up to 10 larvae less than three days old, and begin feeding them royal jelly. The first queen to emerge will sting the other developing queens through their cells, killing them before they can hatch. If two or more queens hatch at the same time, they will fight to the death!

About three to five days after emerging, on a sunny day with low wind, the new queen will take her ‘nuptial flight’. She will find a ‘drone congregation area’ – a place where male (drone) bees from other hives hang out and wait for a queen, and over several days will mate with 12-20 drones in mid-air, gathering as much genetic material as she will need for her entire life (up to six million sperm!).

Back at the hive, the queen’s main role is ‘reproducer in chief.’ She will control the size of the hive, laying more eggs in preparation for Spring and Summer, and slowing laying in preparation for the cooler months when there’s less work to do and less food around. In the height of the Spring, the queen can lay up to 2,000+ eggs a day. This is more than her own body weight in eggs! The queen is always surrounded by a circle of devoted workers who feed her constantly and dispose of her waste. They also collect and distribute her queenly pheromones throughout the hive, letting all the hive’s residents know that their queen is alive and well.

It’s amazing to think that such a different set of abilities and behaviors can arise from the simple matter of food! It makes you want to take your vitamins, doesn’t it? Or perhaps, just a nice healthy dinner, followed by a good spoonful of royal jelly infused raw honey.

How do beekeepers harvest royal jelly?

It is no wonder that royal jelly is an expensive product, as its production is a painstaking process that requires close attention and precise timing. First, a beekeeper creates a small colony of bees with no queen. She ensures that this small colony has many young bees that will work as nurse bees in the hive. Next, she inserts fake queen cups into this colony (several rows of plastic or wax cups that are the right size for bees to build queen cells on), each cup containing a honey bee egg, hand grafted into each cup. Instinctively, the workers will start raising queens for their colony, using the eggs and queen cups provided. The nurse bees will fill the cups with royal jelly. At the perfect moment (usually between the second and fourth day of larval development), the beekeeper will remove the royal jelly from the queen cups with a small suction tool. If she is too early or too late, there won’t be enough royal jelly to harvest. Working in this way, a beekeeper can harvest ~500g (~17 ounces) of royal jelly per hive in a season.

How has Royal Jelly been used throughout history?

In cultures around the world, royal jelly has been used to promote a healthy and long life. Because it’s such a precious substance (so little is made, and it’s not easy to harvest), historical use was mostly for royalty, just like in the honey bee hive. In traditional Chinese medicine, royal jelly is called “food of the emperors”, and has long been prescribed to lengthen life, promote energy and vitality, and prevent illness. Royal jelly has also been used by the maharajas of India, who have long valued the substance as a key to maintaining youthful energy. In ancient Egypt, royal jelly was given to the pharaohs, promoting their longevity. More recently, Pope Pius XII (1876-1958) was prescribed royal jelly from his physician to help him recover from a severe illness. Princess Diana (1961-1997) was documented to have used royal jelly throughout her pregnancy to help with morning sickness, and Queen Elizabeth (currently in her nineties) uses royal jelly regularly to “stave off fatigue”.

Today, royal jelly is used by more than royalty. China is recognized as the world’s largest producer and exporter of royal jelly, with an estimated annual production of between 400-500 tons. Almost all of the exports are to Japan, Europe and the USA. Korea, Taiwan and Japan are also important producers and exporters. Price is ~$100/kg in bulk, but can be much higher in a processed form (such as tablets, capsules or vials) where one kg could cost the consumer as much as $3,300.

Royal jelly is a nutrient rich liquid. It is roughly 66% water, 13% protein, 15% carbohydrate, 5% fatty acids, and 1% trace elements. It contains all the B vitamins, and traces of vitamin C. Royal jelly also contains collagen (the major protein in our skin, hair, nails, bones, and veins), and several antioxidant enzymes.

Today, royal jelly is sold widely as a nutritional supplement, although this is perhaps a mis-categorization as it is taken in such small amounts (~250-500mg at a time) that to use it as a source of dietary nutrients doesn’t really make sense. Rather, it is more often used for its ability to act as a stimulant or ‘wellness boost’.

As the current Queen of England attests, many of the royal jelly supplements sold today tout its ability to boost endurance and combat fatigue and stress. A 2001 Japanese study bolstered these claims, finding that the endurance of mice increased when they were fed fresh royal jelly.

Leigh Broadhurst, Ph.D., a USDA researcher, postures that just like mother’s milk helps to boost the immunity of newborn mammals, royal jelly provides this service to the immune system of a honey bee colony. Royal jelly has also been found to be highly antimicrobial, effective against yeast and bacteria. A 1995 study conducted in Egypt demonstrated that royal jelly was capable of killing several different kinds of bacteria, including Staphylococcus aureus and E. coli.

The well-known children’s author Roald Dahl wrote a short story titled ‘Royal Jelly’ where a beekeeper boosts his fertility and the health of the eventual baby by secretly supplementing the family’s food with royal jelly from his hives. And, in fact, it’s not just fiction – Royal jelly’s effects on reproductivity have been validated scientifically in animal studies – perhaps because of its ability to balance hormones, or it’s ability to boost overall wellness and nutrition. In three different studies, rabbits fed a royal jelly supplement had increased fertility; quail reached sexual maturity faster and laid more eggs, and chickens had increased egg production.

Royal jelly has also been used cosmetically. It contains the protein collagen – what many think of as the key to youthful looking skin. Wrinkles form when our skin looses its collagen. In cosmetics, royal jelly is used to promote skin elasticity, regrowth and rejuvenation. It’s also used in shampoos and conditioners, and increasingly so! While formerly a specialty product, you can now find shampoo with royal jelly at Walmart, Target, Rite Aid, CVS, and in many other common retail outlets.

There is still a lot to be learned about royal jelly – while there are many benefits attributed to royal jelly from personal anecdotes, there hasn’t been as much scientific validation as there has been with other bee products. This could be, perhaps, that there is less available funding for high quality research. Most of the research that does exist comes out of Asia, as it is used more regularly there than in the U.S. Still, there are many personal testimonies to the benefits of royal jelly in many civilizations throughout time – from today’s England’s royal family to Chinese emperors, centuries past. 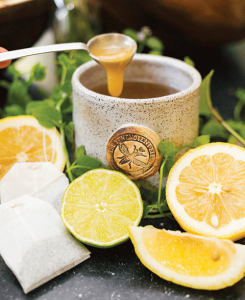 Royal jelly is a perishable product, and purchasing a professionally processed product is recommended. The best way to purchase it is in freeze-dried capsule form, or mixed with raw honey, which acts as a natural preservative. If you do purchase it fresh, we recommend that you purchase it frozen (don’t purchase royal jelly that has been stored or shipped at room temperature). The recipes included below call for royal jelly mixed with honey – we purchase a version of royal jelly in honey where every 1 tsp contains 675 mg of royal jelly.

As with all bee products, test a small sample first to make sure you’re not allergic.

Combine all ingredients until well mixed. Pour the mixture into a small pan lined with waxed paper, or evenly into a silicone ice cube tray. Freeze until solid and cut into 12 even pieces. Store in the freezer to keep solid.

With the caffeine in the green tea and the energy boost from the royal jelly and raw honey, this refreshing drink should kickstart your day or give you a nice afternoon boost. I like it best iced.

Bring water, tea bags and mint to a boil in a saucepan. Simmer for five to 10 minutes or until the minty flavor you want is achieved. Take it off the heat, strain out the mint leaves and tea bags, and stir in the royal jelly honey. Add lemon/lime juice to taste. Serve hot, or chill in the refrigerator and serve over ice (with a citrus wedge and a sprig of mint if you’re feeling fancy!).

Whether you are iron deficient or looking for an energy boost to power you through your upcoming race, this richly spiced smoothie will help. Royal jelly increases oxygen uptake, boosting endurance and stamina. Royal jelly also helps with anemia, which women are twice as likely to suffer from than men.

Mix all ingredients together in a blender. Depending upon your desired thickness, use more or less milk to get the consistency you like.

Stephanie is a passionate beekeeper, mom, herbalist, artist and author. Her upcoming book, The Benevolent Bee, focuses on capturing the bounty of the honey beehive through science, history, home remedies and craft. The Benevolent Bee will be published by Quarry Books in July 2017, and includes recipes and techniques for honey, beeswax, propolis, royal jelly, pollen and bee venom.