The nutritional value of pollen has been demonstrated by measuring such diverse parameters as the growth and development of fat body, the development of hypopharyngeal glands, life span or brood rearing.

Proteins and amino acids (the building blocks of proteins) are extremely important components in honey bee nutrition. Bee colonies rely mainly on pollen to satisfy their protein needs (Höcherl et al. 2012). A single colony consumes between 17 and 34 kg (37.4-74.8 pounds) of pollen per year (Crailsheim et al. 1992; Keller et al. 2005). The nutritional value of pollen for bees is primarily defined by its absolute and relative content of essential amino acids.  Accordingly, pollen from different floral sources has a different nutritional value for bees (Standifer 1967; Haydak 1970; Crailsheim 1990). De Groot (1953) described the nutritional value of various sources of protein for the colonies as well as the requirements of individual bees. He classified the following 10 amino acids as being essential for the growth of the honey bee: arginine, histidine, lysine, tryptophan, phenylalaine, methionine, threonine, leucine, isoleucine, and valine. The largest requirements were for leucine, isoleucine, and valine.

The nutritional value of pollen has been demonstrated by measuring such diverse parameters as the growth and development of fat body (Maurizio 1954 as cited by Crailsheim 1990), the development of hypopharyngeal glands (Standifer 1967), life span (Schmidt et al. 1987) or brood rearing (Herbert et al. 1970). Caged bees show the ability to distinguish between different kinds of pollen. They prefer protein-rich pollens (Schmidt and Johnson 1984) and react to the presence of phagostimulants in pollen (Schmidt 1985).

Pollen of less quality can come from sunflower (Helianthus annuus), blueberry (Vaccinium spp.) or Typha spp. (cattail family) (Schmidt et al. 1987). Despite their optical attractiveness for pollinating insects, even such blooming plants as dandelion (Taraxacum spp.), Haplopappus spp. (flowering plants in aster family) or Kallstroemia spp. (caltrop family) produce pollen of minor value for bees’ nutrition. On the other hand there are examples of wind-pollinated plants (e.g. Populus spp.) which are better apt to satisfy the dietary demands of bees than pollen from animal pollinated plants (Schmidt et al. 1987). 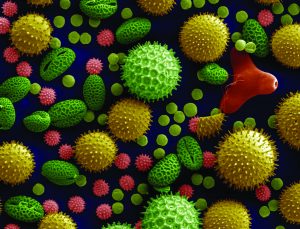 Liolios et al. (2016) ranked bee pollen according to its contribution to bee nutrition taking into consideration the seasonal variation. They found that the richness in protein content of each single taxon alone is not enough to classify it, as a “good” pollen source, and seasonal variation in vegetation and colony needs should be taken into account. In many cases, bees collected more pollen from plants poorer in protein, which were in total more beneficial to the colony compared to pollen rich in protein, but collected in smaller amounts. They concluded that the amount of collected pollen was the most important factor and this is relative to the population of the plants in the surrounding area, the flowering period and the season. The attractiveness of pollen, as indicated by the amount of pollen collected by the bees, was not correlated to the protein content of different taxa. Bees collected pollen from a large number of taxa, but only a few of those contributed significantly to their nutritional requirements.  They found that only 14 out of 46 pollen taxa accounted for 88.8% of the total proteins that were available for bees. The crude protein of these “selected” pollen sources ranged from 13.9 to 25.5%. Pollen from plants blooming in Spring had higher protein content (20-24.7%) than those from summer (15.1-19.9%) and autumn (19.3-23.1%).  The great amount of pollen that honey bees collected in spring and its richness in proteins could explain the strong growth of brood and population during this period.

Pollen pellets collected from honey bees foraging at 62 floral species in Australia were analyzed for protein and amino acid content and their value in nutrition was determined (Somerville and Nicol 2006). The crude protein levels of all pollen pellets analyzed ranged from 9.2% for Hypochoeris radicata (flatweed) to 37.4% for Echium plantagineum (Paterson’s curse) with a mean of 25.9%. Pollen pellets from 15 species were identified as providing protein levels below those acknowledged to satisfy honey bee dietary requirements when they are the only source of pollen available to the colony.  Pollens collected from species of the same genus demonstrated similar protein profiles.  Isoleucine was deficient in 38% of the pollens with 69% of eucalyptus and related species demonstrating a significant isoleucine deficiency.

McCaughey et al. (1980) determined the amino acids and protein contents of hand-collected pollens from selected desert plants that bees sometimes visit and from other floral sources. Prickly pear pollen that is seldom collected by honey bees had the lowest protein content and creosote bush, a pollen source for bees, the highest.  Glutamic acid, aspartic acid and proline were the predominant amino acids in all desert pollens examined. The desert plants had low protein levels, but their amino acid patterns were in agreement with the requirements for honey bees with the exception that catclaw pollen, which is seldom collected by bees, was low in methionine. All pollens contained detectable levels of the 17 amino acids measured. Since honey bees rarely feed on one floral source, the low protein levels of these pollens could be compensated by collection of pollens that have high protein levels.

Amino acid content of honey bee-collected and hand-collected dandelion, Taraxacum officinale,  pollen was determined (Loper and Cohen 1987). Hand-collected pollen (one source) was unexpectedly higher in proline and valine than bee collected pollen (five sources).  Generally, dandelion pollen was low relative to honey bee requirements in valine and isoleucine and low in leucine and arginine. The reported poor brood-rearing capability of dandelion pollen appears to be the result of multi-amino acid deficiency.

Twenty-five pure pollens plus several blends of pollen were fed as sole protein sources to honey bees and resultant survival of bees on these diets was measured.  Average increase in mean life span of bees on a pollen diet versus sugar water controls was 19.5 days, with a range from 3.9 days less than the controls for Ambrosia (ragweeds) to 40.6 days longer, for a five-pollen blend. Actual consumption of test pollen diets also varied dramatically among test pollens, with a mean consumption of 16.5 mg pollen per bee for the first 10 days and a range of 1.9-29.0 mg per bee.

Pollens that induced decreased life span included Ambrosia, Uromyces (a rust spore), Typha, and Kallstroemia; those that induced little increase in life span included Haplopappus, Baccharis (brooms, aster family), and Taraxacum; and those that induced the greatest increase in life span included Ephedra (desert evergreen shrubs), Prosopis (mesquite), Rubus (blackberries, raspberries etc.), Populus and two blends of pollen.  Increased life span was not correlated with pollen grain size, grain spininess, or dispersal vector (biotic or abiotic) and was weakly correlated with season of floral bloom (pollen produced in spring was better than that produced in fall).  Pollen from the family Compositaceae was poorer than average pollen. Major factors affecting life span were amount of pollen consumed, protein concentration in the pollen, and, especially, total amount of pollen protein consumed. By combining information relating to consumption levels and protein intake, reasons why pollen caused the observed life span could be determined. Reasons included presence or absence of attractants and phagostimulants/deterrents, presence of toxic compounds, and a poor nutrient balance or level (Schmidt et al. 1987).

Di Pasquale et al. (2013) tested the influence of pollen diet quality (different monofloral pollens) and diversity (polyfloral pollen diet) on the physiology of young nurse bees, which have a distinct nutritional physiology (e.g. hypopharyngeal gland development and vitellogenin level), and on the tolerance to the microsporidian parasite Nosema ceranae by measuring bee survival and the activity of different enzymes potentially involved in bee health and defense response (glutathione-S-transferase (detoxification), phenoloxidase (immunity) and alkaline phosphatase (metabolism)). They found that both nurse bee physiology and the tolerance to the parasite were affected by pollen quality. Pollen diet diversity had no effect on the nurse bee physiology and the survival of healthy bees.  However, when parasitized, bees fed with the polyfloral blend lived longer than bees fed with monofloral pollens, except for the protein-richest monofloral pollen.  Furthermore, survival was positively correlated to alkaline phosphatase activity in healthy bees and to phenoloxydase activities in infected bees. Their results support the idea that both the quality and diversity (in a specific context) of pollen can shape bee physiology.

Individual and colony-level foraging behaviors were evaluated in response to changes in the quantity or nutritional quality of pollen stored within honey bee colonies (Pernal and Currie 2001). Colonies were housed in vertical, three-frame observation hives situated inside a building, with entrances leading to the exterior.  Before receiving treatments, all colonies were deprived of pollen for five days and pollen foragers were marked. In one treatment group, colony pollen reserves were quantitatively manipulated to a low or high level, either by starving colonies of pollen or by providing them with a fully provisioned frame of pollen composed of mixed species. In another treatment group, pollen reserves were qualitatively manipulated by removing pollen stores from colonies and replacing them with low- or high-protein pollen supplements. After applying treatments, foraging rates were measured four times per day and pollen pellets were collected from experienced and inexperienced foragers to determine their weight, species composition, and protein content.

Colonies responded to decreases in the quantity or quality of pollen reserves by increasing the proportion of pollen foragers in their foraging populations, without increasing the overall foraging rate.  Manipulation of pollen stores had no effect on the breadth of floral species collected by colonies or their preferences for the size or protein content of pollen grains.  In addition, treatments had no effect on the weight of pollen loads collected by individual foragers or the number of floral species collected per foraging trip.

However, significant changes in foraging behavior were detected in relation to the experience level of foragers.  Irrespective of treatment group, inexperienced foragers exerted greater effort by collecting heavier pollen loads and also sampled their floral environment more extensively than experienced foragers. Overall, their results indicate that honey bees respond to deficiencies in the quantity or quality of their pollen reserves by increasing the gross amount of pollen returned to the colony, rather than by specializing in collecting pollen with greater protein content. Individual pollen foragers appear to be insensitive to the quality of pollen they collect, indicating that colony-level feedback is necessary to regulate the flow of protein to and within the colony. Colonies may respond to changes in the quality of their pollen stores by adjusting the numbers of inexperienced to experienced foragers within their foraging populations (Pernal and Currie 2001).

Standifer, L.N. 1967. A comparison of the protein quality of pollens for growth, stimulation of the hypopharyngeal glands and longevity of honey bees, Apis mellifera L. (Hymenoptera: Apidae). Insect. Soc. 14: 415-425.