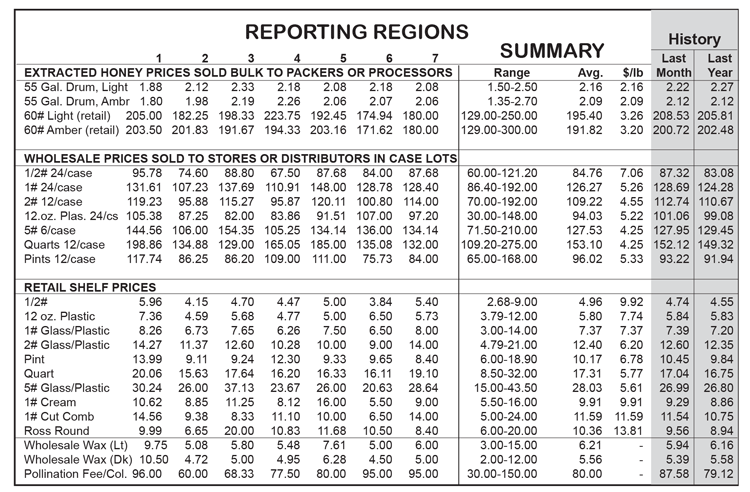 The evolution of the U.S. beekeeping industry continues unabated, though at glacial speed. Very inexpensive, and by most counts illegally imported honey is slowly gutting the U.S. honey industry on the commodity scale, but, importantly, actually helping on the local level. Imports from several countries have increased dramatically in the past couple of years, while the lack of honey imports from China remains the elephant in the room, or should we say beeyard. At the same time, weather has been the beekeeper’s worst enemy this season with too much rain in some places and far too little in the breadbasket where most of our crop is made each season.

So, we went to our reporters and asked about prices, the weather and some management efforts that will help some of these issues. Here’s what we found out.

Overall, 34% of our reporters (primarily our smaller scale reporters) plan to raise prices this year, 59% will remain the same, and only 7% (pretty much our commercial reporters) will lower prices to compete. Regions 1, 2 & 3 are mostly steady, while 4 & 5 are a bit more aggressive in increasing prices.

Producing less honey and more of something else is always an option, so we asked if that was in the cards next year. Overall, fully 63% said status quo, no change, but 2% will increase pollination, 21% are raising more nucs and queens, while 14% will actually increase honey production to meet local demand.

Then we switched to the weather. Rain was mostly the only topic, with an interesting split. 25% too much, 50% about right, 25% too little. Regions 5, 6 & 7 on the lower side, the rest of us split all over the map. It will be interesting to see how NASS honey production reports later this season reflect this. Big picture, 41% will have a reduced crop, the rest average or a bit above. A couple of caveats here. The survey was, perhaps, a bit too early to grasp final numbers, and, no single region was all up, or all down. Time will tell here, as will NASS.

Summer weather will dictate some management chores, too. 70% will be Fall feeding with carbs, 29% with protein, 37% will be combining their colonies to take their winter losses in the Fall (I wonder how either NASS or BIP figure those numbers?), and 57% will be double checking queens before Winter really sets in.