This article is the first of three about the process of developing and bringing to market an organic pesticide to control parasitic mites of the honey bee. Part 2 is about the field-testing process. Part 3 takes a look at the registration process, the necessary hurdle of meeting government requirements to be able to make the product available to the beekeepers.

Key elements of a miticide 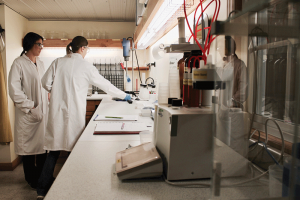 A typical pesticide has two elements: the Active ingredient (A.I.), which is what causes the mortality of the pest, and the carrier of the active, called the inert ingredients or the excipients of the formulation.  Both elements are very important to the effectiveness of the end product.

Because biochemistry is the foundation of NOD’s miticides, we will start in the lab.  Initially the lab was the classic kitchen table; NOD outsourced to contract laboratories for analysis expertise when needed. Now NOD has a well-equipped lab in-house, staffed with a chemical engineer, a quality control officer and a lab technician. 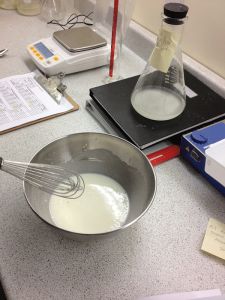 The lab is critical throughout the process: it is where formulations are developed, where we use analytical methods for all the ingredients, analyse intermediate products that are produced during various stages of manufacturing, and develop method of analysis for the end product.  It also utilizes proven and commonly recognized methods to conduct residue analysis, assess total acid levels in honey, and to determine product shelf life.

When NOD was founded in 1997 we decided to focus on formic acid as our active ingredient of choice.  Initially its appeal was that formic acid is very common in the environment, is a natural component of many foods, including honey, and beverages, such as coffee.  In nature, some ants use it as defence chemical, giving the acid its common name, from the Latin formica.1 The actual chemical name is carboxylic acid.  Some plants also use formic acid as a defence chemical: the stinging sensation from a brush with a nettle plant is due in part to formic acid.2 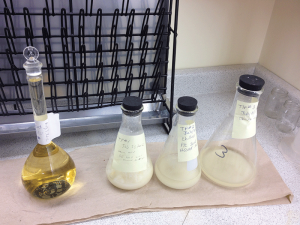 Formic acid is an organic acid, classified by the EPA as a biopesticide.  Varroa mites are the main target here in North America however, as it turns out, the three parasitic mites of economic significance to the honey bee are all susceptible to formic acid. (see side bar “Identifying the Enemy: The Mite Triad”)3.

For the excipients, NOD decided to work with compostable saccharides. In biochemistry, the suffix “-ose” is used to indicate that a compound is a sugar. For examples, table sugar is sucrose, high-fructose corn syrup is a sugar commonly mixed in feed, and, looking at plant structure, wood is cellulose. As strange as it may seem, wooden beehives are actually made of a sugar!

One of the challenges of using formic acid is its high volatility.  Part of our work with saccharides was harnessing ester-based reversible reactions that can be utilized to release the formic acid vapors over time. Another aspect is overcoming surface coagulation. The ecopaper material, pressed into the gel during the manufacture of NOD’s formic acid strips, acts as a wick, to allow the release to continue over several days, quite an accomplishment when you consider the thinness of the strip so it will fit in the bee space, and the volatility of formic acid at the temperature of the brood nest.

The development of a pesticide takes many years, from concept to formulation to field testing, and many times back to the drawing board. Once field-testing is successful, the next step is to ensure that a reasonable shelf life is possible.  With Mite Away Quick Strips (MAQS), NOD had developed a product that would be usable for a minimum of 12 months as long as it was stored under 25ºC. The decision was made in the Fall of 2009 to bring it to market.   Registrations were applied for and granted, starting in 2010 in Hawaii due to State support of its organic honey industry. Mite Away Quick Strips is now registered and sold in 22 countries around the world.

Customer feedback is important to us to ensure we are meeting peoples’ needs. The biggest challenge to emerge was the shelf life and the cool storage conditions required to keep the strips from going too soft. The R&D project manager turned to a new goal.

Back in the lab many saccharides were screened as potential shelf-life extenders for the Mite Away Quick Strips technology.  In the end it was decided to go with two: one to act as a stiffener and the other as a binder. After five years of development and testing we are extremely proud to introduce the next generation organically based miticide, Formic Pro™.  The US-EPA has granted us a two year shelf life to start with, which can be extended as more data becomes available.

Upcoming: Part 2: Into the beeyards for field testing.

I hope you have enjoyed the peak into the lab stage of the development of a biopesticide.  In Part 2 we will look at dose determination, harnessing the bees’ natural activities, targeting mite castes, and the risks to host species, our honey bees. 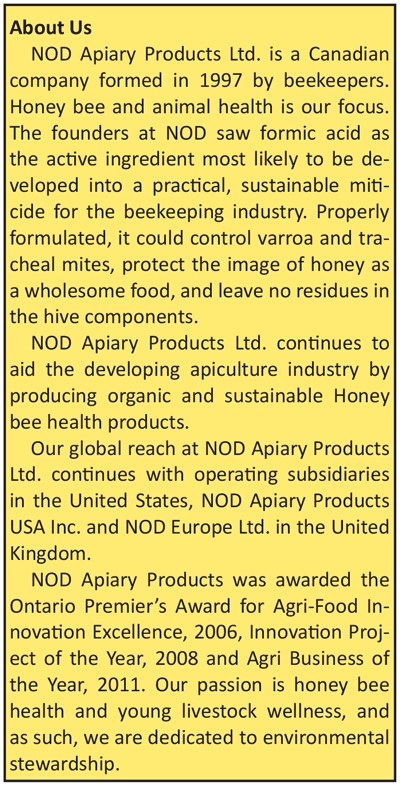