The snowy white blossoms of the native serviceberries are a familiar sight during the Spring in most areas of the country. Also known as shadblow, sarvisberry, and shadbush, these trees and shrubs are members of the rose family. A source of beauty year-round, they’ve earned a place in the bee garden.

Worldwide, there are perhaps 25 or so species. They’re found in Asia, Northern Africa, Europe, and North America. About 20 of those are native to America. These occur in both the East and West. Around eight species are cultivated.

The delicate flowers of these spreading shrubs and small, much branched trees are welcomed by bees and beekeepers alike. Nectar and pollen from serviceberries help to build up colonies in the Spring. When enough of the plants are available, they can yield a small crop of honey. The amount can vary by species and location.

The graceful plants are relatively small – usually less than 35 feet or so in height. In the wild, the plants can be difficult to identify because they readily hybridize. The furrowed, scaly, light gray to silver bark lends color to the landscape during the Winter months.

When grown in landscapes or in the open, these generally develop into a round crowned tree, often multi-stemmed. In the wild, they’re often stunted, crooked, and quite picturesque.

The plants are best known for their masses of small, delicate, star-like blossoms that cover the plants. Appearing in long clusters at the ends of the shoots, these emerge as the leaves unfurl. They’re generally white, but can occasionally be pink.

About an inch across, the unisexual or bisexual blooms contain five narrow petals and a green, bell-like, five-lobed calyx. A cluster can contain a dozen or more flowers.

Usually tasty and edible, the showy, seedy fruits, which are enjoyed by birds, vary in color and shape by species. Forming clusters, these are quick to ripen in Summer. Round to pear-shaped, they can be red, almost black, purple, purplish-black, or blue-black. About the size of a blueberry, the fruits were an important food for Native Americans and pioneers.

Commonly grown in landscapes, these are excellent choices for screens, informal hedges, and windbreaks. As understory plants, serviceberries do reasonably well in partial shade. However, they’re more floriferous in full sun.

Most species prefer a well drained, neutral soil although certain ones are adapted to acid conditions. They thrive in a range of soil types, including clay.

With a moderate growth rate, serviceberries are generally strong enough to withstand storm damage due to their strong limb structure. Typically, minimal pruning is needed, mostly the removal of root suckers that emerge around the trunks.

The plants are drought tolerant once they’re established. These withstand pollution and are suited to urban spaces. For the most part, serviceberries are relatively free of most pests and diseases although they can occasionally suffer from the same ailments as fruit trees. Most cultivars are generally disease resistant.

Easy to transplant, serviceberries are somewhat easy to grow from seed. These can also be grafted. Softwood cuttings are usually less successful…

Some of the best native serviceberries for bees are the following.

Also called smooth serviceberry, this dense, somewhat short lived plant is hardy to zones four through eight. It adapts to a range of moisture levels from dry or well drained, moist soils to wetter conditions. Preferring partial shade, it is tolerant of various pH levels from acidic to slightly alkaline.

Allegheny serviceberry occurs in Washington, Minnesota, and Iowa. In addition, it is native to much of the East except for Florida, Mississippi, Louisiana, Arkansas, and Missouri. This plant typically grows on ridges.

The species is similar to downy serviceberry but is slightly smaller. This small tree or narrow shrub typically reaches 25 to 35 feet in height and ten to 20 feet wide. The smooth, blue-green foliage, three inches long, is initially purplish-bronze.

The large white flowers open in early Spring on drooping or nodding clusters. The deep purple fruits are especially delicious.

Bartram’s serviceberry, also known as oblong fruit serviceberry and mountain-juneberry, occurs in Minnesota, Wisconsin, Michigan, West Virginia, Rhode Island, Pennsylvania, New York, Massachusetts, Vermont, and from New Hampshire to Maine. Suited to zones three through six, this species grows in bogs, peaty thickets, slopes, and along stream banks. The plant adapts to a range of soil types, including acid ones. This species is tolerant of both dry and moist conditions.

The tough, spreading, rounded, much branched, free flowering shrub reaches three to six feet in height and up to four feet across. The greenish-gray, oval foliage is somewhat hairy. The new leaves are slightly bronzed.

The small, white blooms open singly or in few flowered clusters in Spring from April to May. Ripening in July, the blackish-purple to deep purple elongated fruits are bloomy and ½ inch across.

Hardy in zones four through nine, Canada serviceberry occurs in the East in swamps and lowlands. This is most commonly found a couple hundred miles or so from the coast. Its range extends from Maine, New England, New York, Pennsylvania, and West Virginia southward to the Atlantic region, Alabama, and Mississippi.

The young foliage is gray-green. This floriferous species bears white blossoms that are smaller than those of most serviceberries. They open on erect, short clusters and produce deep purple berries.

This species is suited to moderately dry and wet soils. It has provided an early crop of honey in some locations. 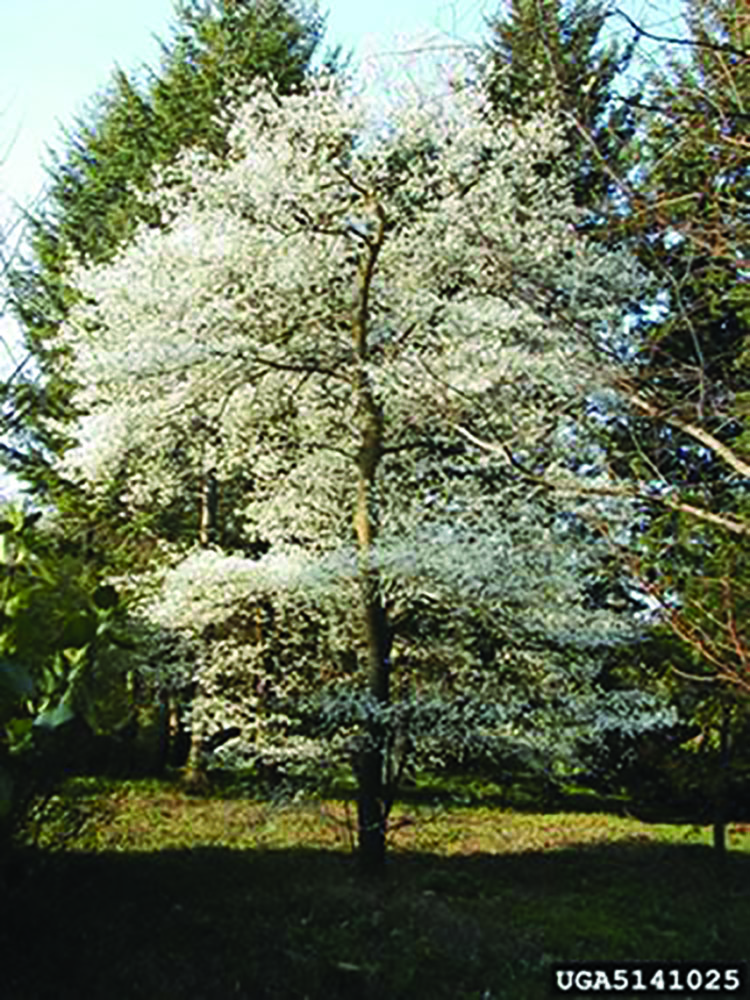 Downy serviceberry typically grows at the edges of woods and rocky outcrops. This species covers much of the East westward to Minnesota southward to Texas and the Gulf states. It is quite similar to Allegheny serviceberry except this one is taller and has smaller blooms. Suited to zones four through nine, it adapts to various moisture levels from dry to wet.

Several varieties of this species can be found in some areas. Usually 20 to 30 feet tall and eight to 15 feet wide, the multi-stemmed tree with a narrow rounded or oval crown features striking furrowed bark with conspicuous, narrow, vertical lines. The trunk can grow to two feet in diameter.

Emerging on long leafstalks, the young foliage is initially somewhat hairy above. The underside is paler and densely hairy. Deep green to greenish-gray, the finely toothed, tapered leaves are up to four inches long. Somewhat variable in shape, they’re mostly ovate.

The showy white blossoms appear in Spring on long clusters that contain up to 15 blossoms. The petals range from strap-like or linear to oblong. The calyx is cone-shaped. Often inedible, the purplish-red, red, or deep purple fruits ripen in clusters in mid-Summer.

Inland serviceberry, also known as Wiegand’s chuckleypear, can be found from Minnesota, Iowa, Wisconsin, Illinois, Ohio, and Michigan to New York and Maine. It is hardy to zone three. The small tree or straggly shrub reaching 25 feet in height resembles the downy serviceberry except for its smaller size and the smaller blossoms in shorter clusters.

The finely toothed leaves are nearly three inches long. Emerging from May to June, the white blooms open in long clusters containing six to 12 blossoms. The blackish-purple fruits ripen in July and August.

A small, slender shrub or tree reaching 20 feet in height, roundleaf serviceberry has spreading, slender stems. The Latin species name refers to the red twigs. The bark is brownish-red. It is hardy to zones four through eight.

The alternate, oval-oblong to roundish-oval, coarsely toothed leaves are nearly 2½ inches in length. The young foliage is hairy and vivid green.

The white blooms open in May on loose, nodding clusters. The strap-like petals are ½ inch long. Slightly smaller than those of most serviceberries, the very tasty, sweet, almost black to deep purple fruits ripen in August in pendant clusters. These are considered superior to other serviceberry fruits.

This suckering plant is native to the Dakotas, Minnesota, Iowa, Missouri, and throughout the East except for Arkansas, Louisiana, Mississippi, and Florida. It is most common in the mountains. Preferring full sun, this species does well in dry, well drained, acid soils.

Its habitats include upland woods, and rocky or sandy soils. Hardy in zones four through nine, this is only one to six feet tall but can be three to 10 feet wide. The ascending stems are hairy when young.

The oblong to elliptic foliage is slightly over two inches in length. The very pale pink blooms open on erect clusters. In the South, this can begin blooming in March or April with the berries ripening in May and June.

Some sources consider dwarf serviceberry (Amelanchier pumila) to be synonymous with running serviceberry, while others classify it as a separate but quite similar species. Sometimes called low serviceberry, this is found throughout the West from Washington to Montana, New Mexico, and Colorado. This favors limestone-rich soils.

Also known as western serviceberry, this species can be found along the Pacific Coast eastward to Montana through the Dakotas, Nebraska, Minnesota, Iowa, and New Mexico. It is by far the most widely distributed serviceberry in the area. Hardy to zones two through six, it generally grows at 4500 to 9000 feet elevation.

Preferring low humidity, this drought tolerant species adapts to dry and moist soils. It inhabits thickets, streambanks, and prairies. Several serviceberries that used to be considered separate species are now classified as varieties or subspecies of the Saskatoon.

Usually a low growing shrubby tree with an open, rounded, upright crown, it typically reaches four to 15 feet in height and is almost as wide. This plant features hairy stems that can spread by rhizomes.

The Latin species name refers to the alder-like foliage. The coarsely toothed, leathery leaves, 2½ inches long, are light green above and lighter colored and hairy below. The lightly scented, white blossoms open on short, dense, silky flower clusters that contain up to 20 blooms in early Spring.

The purplish-red to black fruits are egg-shaped to round. Ripening in clusters in Summer, these are said to be the best tasting serviceberries.

This is considered an important source of nectar and pollen. It has brought an early honey crop in some areas.

This species grows on mountain sides, woodlands, rocky slopes, and canyons in dry areas. It can be found in the mountains and plateaus to 8000 feet elevation. Hardy to zones four through nine, Utah serviceberry occurs over much of the West from Washington and Idaho to Montana, Wyoming, Colorado, New Mexico, Texas, and California. The drought tolerant plant requires a well drained soil.

This can be a dense, irregularly shaped shrub or an open crowned, spreading tree. Typically up to 15 feet in height, it has reached 25 feet under good growing conditions.

Hairy on both sides, the greenish-yellow, toothed, alternate leaves, 1¼ inch in length, are almost round. The white or pink blossoms open in Spring from April to June in oblong clusters containing three to 12 flowers. The blooms feature five strap-like petals. The purplish-blue berries ripen in clusters in late Summer and Fall.

Connie Krochmal is a writer and a beekeeper in Black Mountain, South Carolina.