The Merchant of Honey
By: Becky Masterman and Bridget Mendel

Somewhere in Minnesota, in the biggest shopping mall in America, there is a small shop called Worker B (www.worker-b.com). This independent shop sells hand-made hive-based skincare products and honeys of all colors, from pale white, to dense, crystalized brown, red-gold or amber, to almost black. These are honeys from all over the globe, sourced by store owner Michael Sedlacek via a constellation of beekeeper friends and acquaintances. Mall visitors stop by to taste or buy honey, some looking for exotic flavors, others, searching for the particular taste of home, the sense-memory of some local flowering tree, a season, as captured by honey bees.
“Elsewhere in the world, honey is kept in high esteem. It’s maybe the most valued food,” says Michael, gesturing to a tiny batch of honey only produced in Yemen which he says is sought-after by his Middle Eastern customers.
Not all Americans share this reverent attitude. Some are surprised to learn that his honeys aren’t artificially infused with flavors, and instead are distillations of particular landscapes. Many of his local midwestern customers are used to one, homogenized “plain-sweet, grocery store” honey flavor, and are shocked by honeys tasting of cotton candy, prunes, molasses, mint or bitterness. 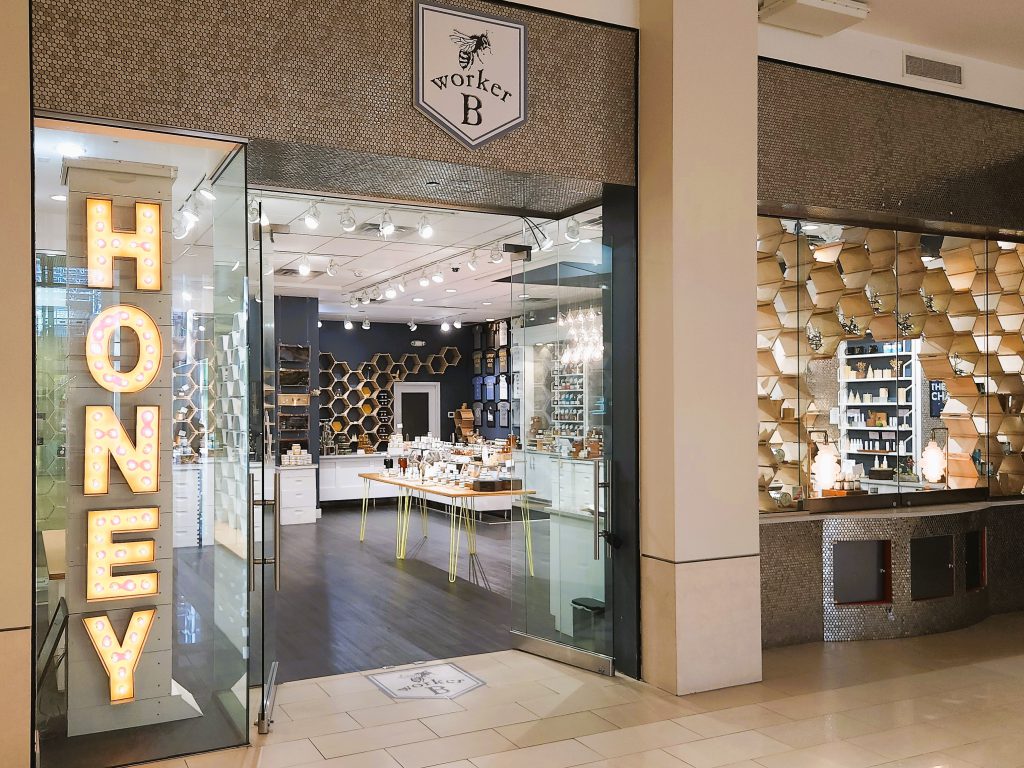 A unique retail experience, Worker B is located in the Mall of America, the largest shopping mall in the United States. Photo Credit: Mitchell Brown

And Michael is constantly searching for new honeys to meet the taste of long-time customers, and surprise new ones.
“We sell honey from tiny producers, who send batches pulled from particular nectar flows or some unique weather situation. So, we run out of things… We have to teach people to adjust their expectations, especially folks who are used to one flavor, or one consistent product.”
Somewhat unexpectedly, Michael describes his soon to be 200 varieties of honey as “all the same.” By which he means that, after thousands of hours manning the honey counter at the shop, Michael believes it’s all about celebrating the uniqueness of a particular honey. “Even if you don’t like it, it doesn’t mean it isn’t good,” he says. Rather than having a favorite variety, Michaels pulls a jar of honey like a tarot card from a deck, looking for stories.
What kind of stories? Stories about seasons, flowers, growth, climate, natural disasters.
Michael also hears a lot of stories from customers, about their connection to bees or to beekeeping, a particular sting or honey they recall from childhood. Often, deals are made right in the shop: a beekeeper walks in and asks, Would you be interested in honey sourced from persimmon trees in Illinois? Absolutely! Would he sell a few cases of honey produced after wildfires in the western United States, when chokecherries were all that bloomed? For sure, send a three ounce sample. Would you buy two dozen 10oz jars of zinnia-field honey? Oh, yes.
How about some clover honey? Well, not so much… Michael rarely takes the stuff; it just doesn’t interest him.
“The best honey comes from the beekeepers that care the most. You can feel it if people care. The honey feels alive. I don’t know what it is…”
Worker B is a business sustained by a unique confluence of factors: place, personality, and passion. Michael is outgoing, gregarious, and patient. While he describes the honey counter as a “challenging place to be,” you wouldn’t know it by his demeanor. While casually answering bee questions – Why is honey so expensive!? (it’s hard work to produce!) Can I buy your most expensive honey? (Sidr from Yemen, Samar from UAE and Melipona bee sourced from the Yucatan) who stop by this retail landmark on their way to the Mayo Clinic or elsewhere. Michael says the shop wouldn’t thrive without that stream of international folks who love and seek out rare honeys. Though, Michael has reached a fair number of locals, who may have come in looking for clover, but end up starting their own collections of unique honeys. 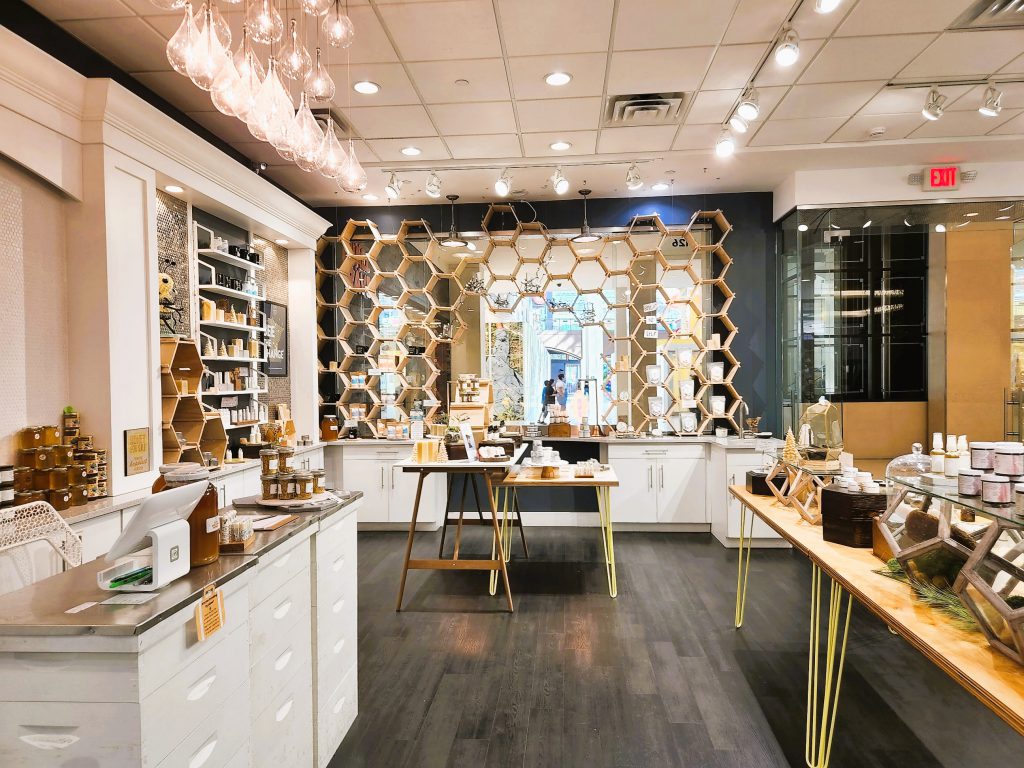 According to Worker B owner Michael Sedlacek, their skincare line (shown here) and honey sales proved to be a winning sales formula for their retail and online stores. Both lines need each other. Photo credit: Mitchell Brown

Like many small businesses, Worker B, a 12 year old institution, was massively affected by the global pandemic: Supply chains were disrupted, so imports halted. The Mall went dark. A business model dependent on members of the public standing elbow-to-elbow at a counter in a mall, licking honey off sticks, became unthinkable.
Pre-pandemic, Worker B had been in a phase of expansion, opening a spa and another honey shop. Everything closed down very fast, and bills piled up. “We are just not the same business as we were pre-pandemic.”
But Michael and his small team (cut to four from 22 by the pandemic) were determined to keep going, and incredibly, they did. They shipped honey and skincare products to a loyal customer base, and bided their time until the world opened up again. After all, the buying, selling and gifting of honey is a tradition that has persisted through every human catastrophe in recorded history.
Note: The authors disclose that Worker B has been selling University of Minnesota Bee Squad honey for many years.
Acknowledgement The authors would like to thank Dr. Marla Spivak for helpful edits and suggestions. 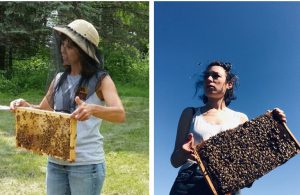 Becky Masterman led the UMN Bee Squad from 2013-2019. Bridget Mendel joined the Bee Squad in 2013 and has led the program since 2020. Photos of Becky (left) and Bridget (right) looking for their respective hives. If you would like to contact the authors with honey selling success stories or other thoughts, please send an email to
mindingyourbeesandcues@gmail.com