A string of hives between posts can fend off the pachyderms better than other deterrents, research shows 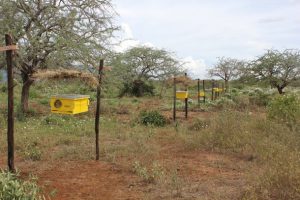 In the African bush in southern Kenya, Lucy King watched an elephant nicknamed Mohican rest under an acacia tree, seemingly nonplussed by an overhead beehive. It was 2007, and King had just published a behavioral study confirming a belief, widely held by Indigenous communities for thousands of years, that elephants are terrified of bees. “I was completely thrown by this,” King says, recalling the day she sat watching the untroubled matriarch. “I was like ‘No!’”

Bees tend to sting elephants around the eyes, behind the ears, in the mouth and even inside the trunk. For her research, King, a zoologist and head of the Human-Elephant Co-Existence Program at the nonprofit organization Save the Elephants (STE), had documented families of elephants running from bees, kicking up dust and shaking their head as if trying to knock bees out of the air. Even recordings of buzzing bees that King played in the bush led to elephants running and “warning” others as they fled.

Fortunately, observing Mohican on that hot day, King eventually realized what now seems obvious: for the bees to scare elephants, the insects must be swarming. King asked her research assistant to chuck a stone at the hive, “and then suddenly, the bees just erupted,” King says. “And the elephants just fled.”

That aha! moment led King to sketch a novel design for using live beehives as “fences” to protect farm crops from foraging elephants. The goal was to reduce human-elephant conflicts, which increased significantly in parts of Africa in the 2000s. Kenya has seen some recovery of its population of the pachyderms in recent decades, thanks to conservation efforts there—although the total population of African elephants has declined dramatically in the same time period, King says. Meanwhile sub-Saharan Africa’s human population rose from about 870 million to 1.1 billion people between 2010 and 2020, according to the World Bank. The upshot has been a rise in hotspots where people and elephants compete for space and food. 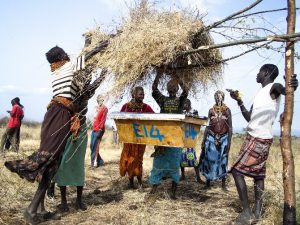 “Elephants are disturbing us a lot,” a Kenyan farmer told researcher Sophia Weinmann during an interview for her 2018 master’s thesis about the impact of the giant animals’ crop raids on farmers in Sagalla, Kenya. “I planted about six kilos of green grams; they were all eaten. One time I just fainted in the field after waking up and seeing that happen.”

An elephant can eat a farm’s entire harvest in one day, seriously threatening a family’s income and food security, Weinmann says. The situation has grown more acute during the pandemic: a World Bank report in January revealed that between April and August 2020, residents of four countries in sub-Saharan Africa relied more heavily on agriculture as a means for survival than they did in prior years.

And although elephants are typically peaceful, they can endanger humans if in the search for food the animals end up raiding sheds or trampling homes. To protect their livelihoods, some farmers have taken to shooting elephants, King says. “Sadly, we’re losing these animals by the day, and in some countries, by the hour—to not only ivory poaching but this rapid rise in human-elephant conflict,” she adds.

In an attempt at a nonlethal solution, nearly 10,000 beehive fences like those in King’s initial sketches are now built into sites in 20 African and Asian countries, she estimates. STE team members focus on providing bee-fence kits to farmers in the epicenter of the human-elephant conflicts in Africa, often near game reserves. Each kit includes 12 beehives and 12 dummy hives. The latter double the number of objects that resemble hives to elephants, eventually stretching out the effect without the added expense and upkeep. Hives are suspended from wires hanging between wooden posts. If an elephant tries to enter a farm, it walks into the wires, shaking the hives and triggering a swarm. STE covers the cost of the kits—around $1,200 per acre of crops. King expects each kit to last 10 years.