The phenomenon of laying workers is the last ditch effort for survival of the bee colony, the last attempt to avoid the certain death of the doomed hive.

This is a sign of strong instinct of bee survival, embedded in the genes after thousands of years flourishing. This 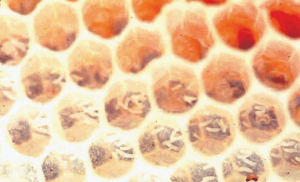 A man can’t help but admire this mystical insect world, and their amazing societies among them. The beekeepers know that without a queen there isn’t any offspring production, there isn’t any replacement of continuously dying worker bees.

The constant hatching of the new worker generations provides the mean of replacing the aging population within the hive. What do the bees do when this continuous rejuvenation is interrupted and no more hatching happens? It takes 24 days until the last egg emerges. During this time period the bees try to replace the lost or incapable queen, sometimes even using older four day larva.

Beekeepers know that if the larva hasn’t started receiving the royal jelly within five days, the attempt is doomed and the queen cell modified from a worker cell is always smaller than the normal queen cell. All these conditions fundamentally effect the quality of the future queen and her reproductive organs remain inferior. The sperm storage capacity is smaller too and the queen runs out of the sperm much sooner. All these are the consequences of inferior nourishment, which originates from the late start, more honey and pollen instead of royal jelly.

These emergency raised virgin queens face other challenges during the mating flights, like bad weather, 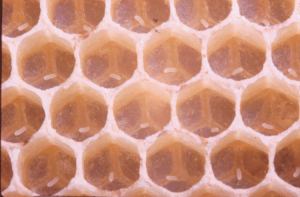 A normal queen places a single egg in a cell at the very bottom.

predation, accident, etc. and consequently the colony may remain queenless. That means the colony has no hope to produce a new replacement. If the beekeeper doesn’t remedy this situation the worker bees take action on their own, following their instinct.

By this time the normal life in the hive becomes chaotic, the original routine is drastically altered. The workers’ reflexes activate certain changes in their body in order to try to save the doomed colony. After about three weeks their normally suppressed reproductive organs becomes larger and active. These worker bees with activated reproductive organs start laying eggs in the worker cells. But these disguised queens have never mated, consequently they can’t lay sperm-fertilized eggs. Very often more than one egg is visible in these workers’ cells, in random ways. Most likely this symptom originates from the smaller abdomen and they can’t place the eggs the proper way, since their body is not built for egg laying.

These laying workers want to produce worker larva, so they lay eggs in the worker cells. The problem is these eggs produce drone larva, not suitable for the smaller worker cells, in other words they are too small (4mm instead of 5mm). However when the larva is growing, the heighth of the cell is not adequate so the bees lengthen the cell wall, making it deeper. When the larva pupates, it will stick out of the comb surface, which appears “bumpy.” We call it “humped brood.” The emerging drones are smaller than normal drones. So, even this collective last ditch effort can’t save the colony without new workers and they slowly dwindle into extinction.

What can the beekeeper do when the colony reaches this stage? Please note that in this case do not attempt to 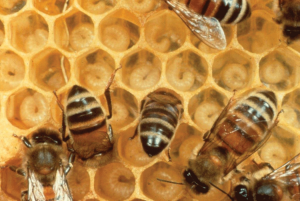 requeen the colony unless it is strongand there is brood from other colonies added at the same time. Otherwise the hive should be dismantled and the bees added to queenright colonies.

The main problem with laying workers is difficult to find them since there are more than one and not distinguishable. That’s why the requeening attempt often fails. However if we leave this task to the bees, they can recognize the laying workers.

Using this principle I’ve successfully requeened laying workers many times. The hive of this strong colony with laying workers needs to be switched by another queenright colony hive. This hive switch should be done on a sunny day, after about 10:00 a.m., when the outside worker population is foraging. So, what do we accomplish by this manipulation?

When the foraging bees from the queen right colony return to the accustomed home location, they find themselves in a chaotic, disturbed colony. The main problem is the lack of queen pheromone, which coordinates normal colony life. Beside this worker brood pheromone is missing. The workers from the queenright colony will recognize this abnormal situation and immediately start restoring the colony order. This is a very strong instinct of the social honey bee, when the queen pheromone regulates the colony activity and the workers’ laying is restricted.

These new workers finish restoring order in about 48 hours, and eliminating many of the laying workers. The beekeeper should remove drone brood by scraping or simply replacing these frames.

In the next step we requeen the laying worker-free hive by a strong nuc. The newspaper method works fine, the nuc should be placed on the top. The nuc should not have outside entrance. The only way to exit is through the already cleared hive, but first the bees need to chew through the newspaper barrier. That takes time and happens gradually and the queen pheromone from the nuc will seep into the lower hive as well and the combined population is on its way to establish a normal life. This hive shouldn’t be disturbed for at least five days, otherwise the new queen may be rejected, even killed.

What happens to the original queenright hive after loosing a significant foraging work force? Usually it will recover without much set back. A strong colony has a large worker population and these bees will graduate to foragers and replace the lost ones.

I hope this method will ease the mind of many smaller beekeepers who are most likely more attached to his/her bees and don’t want to see them to be wasted. This way not only the bees are saved, but we keep the same number of colonies, as well.