By Involving All Members In The Good And The Bad, Listening To Concerns And Forever Adapting To New Ideas And Ways, We Lessen Our Chances Of Being On The Wrong Side Of Heated Debate. 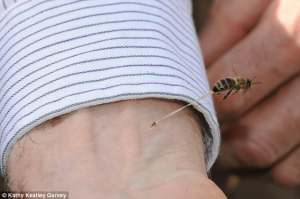 It is a gorgeous day as you decide to go into your hives to do an inspection. You don your equipment, grab your tools and head to your apiary. You’ve done this several times before, yet you stand in awe watching your girls as you approach. They are heavily laden with pollen baskets filled to the brim as they make their decent towards the entrance. You carefully crack the outer cover, and slowly start to remove frames to look for healthy brood pattern and stores. Using your hive tool, you scrape the propolis and burr comb- cleaning up the frames to ensure stability and ease for the next inspection. Suddenly, you notice a queen cell.

As a leader in your bee club, from time to time you must crack the cover and do an inspection. You arm yourself with the protection of your by-laws, mission statement and opinions of the members as a whole. Standing in the back as your friends and fellow members come in to the meeting; you watch in awe as your club socializes and talks about their hives, their bees and their personal lives. They each bring knowledge, experiences and advice to the meetings to share with others, and every single one is valuable. Having a personal relationship with each member is essential to understanding their background and ensuring ideas as well as issues are brought to your attention early. Encouraging words go a long way with most members, but sometimes, it is necessary to inspect more frames to satisfy stating it is a healthy hive.

Just like the different options that beekeepers have with their frames, hive bodies and bee breeds, local bee clubs can be completely different from one another in all aspects, or similar in some ways. Clubs can operate with a handful of members to hundreds, each with their own dynamics and characteristic personality. While your objective to attend a meeting may be based on bees, others may divulge into the business and operations, or the community and volunteer aspect. While most clubs operate on a small, local level, some decide that it is in the best interest of the club to become a nonprofit with a larger reach of resources. Becoming a nonprofit can substantially change the order of operations for any club, and if allowed-can come to the point of taking over the most common reason that members attend the meetings to learn more about bees and keeping. One reason that bee clubs dissolve or branch into smaller clubs is lack of understanding of what the membership wants out of their club and meetings. The most logical choice is to, at least yearly, if not at every meeting, review your mission statement and ask suggestions from the all its members on how the club can set goals to reflect its’ core values, the mission and to further improve on operations.

Having a board set up is a major investment in the sanity of your club. Many hands make the workload light by delegating duties fairly among the officers. Using them as you would a hive tool, you can find that working on club business takes much less effort. Reports from each officer on their duties during a board meeting will help ensure a streamlined approach in the form of announcements during your club meetings while continuing to give your membership transparent views on decisions and happenings in your club. By being organized in this fashion, when dissension occurs, the board can asses the motives behind it as a unit. Then,  following the mission statement and by-laws, it can make executive orders on how to move forward. This becomes complicated when one or more board members choose to overtake the club based on personal opinions or agendas. That is when following the by-laws and protecting those words that were voted on to speak in behalf of all the club is the best device to remove such propolis.

Your hive is only as strong as each bee and their assigned role. Having lots of brood and no guard bees does not fair well. Ensure that each board member takes their responsibilities seriously, especially the treasurer and by laws chair. Having a treasurer that does not organize receipts, copy invoices, keeps arranged membership information nor attempts to create documents that can be viewed and shared among the board and entire club can be seen as a dismal negligence on their behalf. If anything were to happen and they were not available, the shrewd paper mess they left must be fixed by someone immediately. If the treasurer refused to fulfill their position properly while in it, the chances that there are many mistakes and even defiant misappropriations of money are very likely.

Also make sure your By-laws chair is someone accountable. Bylaws from club to club differ in length, depth and reach, but should focus on the actual activities the club plans to undertake and the direction required from the leaders. Outlining responsibilities for the executive board as well as a mission statement that is the primary goal of the club should be heavily integrated in the paperwork. Having only one or two people in charge of the writing and revising may create an opportunity for an individual looking to change the anatomy of the club to do so quietly and without knowledge of the club or board. Keeping the style similar but changing numbers, adding words or sentences will require diligent research to uncover, and if not foreseen before the vote; such actions need to be directly addressed to the masses, automatically repealed, then re-voted on at the next quorum.

Since nonprofits require certain wording for acceptance from the Internal Revenue Service, it is imperative that it is reviewed and voted on by the membership after thorough review. This can be done by giving ample time for their review through electronic platforms as well as having hard copies available as quickly as possible before the vote.

It starts as just a small piece of misplaced comb. You leave it and the next time, you can barely lift the cover or the frame without disrupting the surrounding area. If you continued to leave it alone, soon the entire hive could not be worked without destruction. Same is with members that choose to create and spread rumors and continue to propolize their own ideals and misplaced intentions within the club. If left unchecked, certain devastation is imminent. It is impossible to please every member every time. That’s the best reason that clubs choose a majority vote on important facets of operation. By encouraging members to ask questions, having transparency during meetings and inviting them to sit in on board meetings; Most issues that start small will never grow into a larger problem. This is especially true of newer clubs where expectations are high and there is no money available yet for the operations or start up fees.

Board members may contribute their own finances and time for the betterment of the club, usually without expectations of being repaid quickly or at all or even thanked publicly. They do these things to build strength in a club they believe in, that they want to see grow and have shown their loyalty by placing the club’s needs above attention to themselves or adding to their resume. Those are the members that you want sitting in positions of authority, those that give freely and without demanding anything in return. Keeping records on such selfless devotions may seem unnecessary, but in being fully transparent, should be documented and reported if asked by any member.

When you find that queen cell, time is of the essence. You need to determine your next decisions as a beekeeper and also as a leader, quickly. In our hives, we know that finding this evidence suggests an upcoming swarm, a queen that is not favorable, or no queen at all. You may have a member or board member that does not agree with the arrangements or decisions that have been made.  Just like in your hives, you need to examine the cause and determine the source of the issues. Reminding members of the board’s transparency and inviting them to bring their issues or solutions directly to the leaders should be the first step, followed by appropriate reflections on any issues promptly.

When all else fails to satisfy a member that is resilient on creating controversy, remember your other lessons learned as a keeper. Allow the membership to determine the course of action. Whether the timing is right for this to be done through an election or placing the option straight to the member to leave on good terms you may suggest a nearby club that more closely resembles their desires and drives in what they want out of a bee club. As a last resort, your bylaws could contain another option to remove a member or take them off of good standing. Any of these may cause other members to leave along with their “queen”, but is also a natural occurrence just like in our colonies. Their absence does not determine alleviation of the issue they presented and should be brought before everyone to be considered, acknowledged and handled to allow the club to move forward, stronger in the long run.

Working with honey bees, it is well known that from time to time we will feel the sting. It is simply a piece of this addictive hobby. We may take all measures to make it happen as few times as possible, but it’s never an issue of if we get stung, it’s a matter of when. In our clubs, as leaders, we need to take this lesson home. By involving all members in the good and the bad; listening to concerns and forever adapting to new ideas and ways, we lessen our chances of being on the wrong side of a heated debate. The entire board is responsible for the club’s actions as a unit when each has a vote in how things are decided; Whether or not individuals agree with the outcome of these decisions. Celebrations along with the issues that may arise along the way should be considered as being from the entire board with no blame placed on the shoulders of a single voting board chair. Having the privilege of being the leaders who make these decisions comes with the possibility of being in opposition with another member and at some point there is a good chance it will happen. When it does, staying calm and providing facts only go as far as your actions have proven beforehand. Let your actions speak louder then your words, always keeping the best interests of the mission statement and the members at the forefront in any decision. How we react to disagreements, slander and rumors truly determines our abilities to lead, our motives and  loyalties. As leaders, we should always represent the entity that is our club by not including our personal grievances with others. Leave those at the entrance.