CHICKENS, MOWING, JUST BEING OUTSIDE. 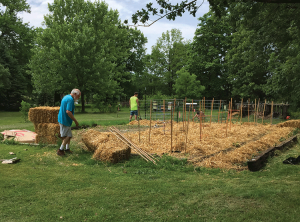 Kim, Jake and Jessica getting the garden in.

I hope you are all having a wonderful, sunny, warm – but not too warm – Summer.

We took a couple of extra days off around the Fourth of July holiday and spent almost the entire time outside – gardening, mowing, sitting on the deck til after dark. It was grand. I’m pretty sure I could have been a farmer. Except for the occasional snake, I love our yard and being outside, even if it’s pulling weeds or just puttering around. Thanks to Kim’s horticulture background and amazing green thumb we have a deck filled with different kinds of plants.

And thanks to help from daughter Jessica and borrowed child, Jake, I think we will have an amazing garden this year. Of course as I type this it is pouring down rain and is supposed to do that everyday for the next four days. It seems it’s either feast or famine when it comes to the rainfall. 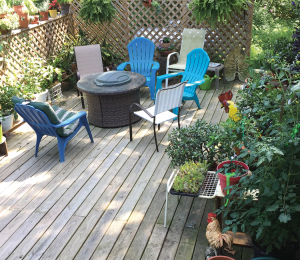 Thank you Kim, for the deck full of beautiful plants.

The mowing is my job at our place and I have to say I’ve always enjoyed mowing, especially since I now have a nice riding mower. But even when I had a push mower I didn’t mind it at all. I find it very soothing to be able to hear nothing but the mower – no traffic, no neighbor’s dog barking. My mowing techniques are a little unorthodox and would probably bother some of you compulsive line mowers. You know who you are! I don’t mow in a straight at all, partly because we have so many trees, bushes, beehives and stuff to mow around. And don’t forget the compost bin we finally built last year. But mostly I just don’t want to mow in a straight line. I like just rambling around the yard taking an assessment of what’s going on. Are there trees that are dying or not doing well, are the bees flying that day (I’ve gotten stung a few times as I go zooming by the hives), what are the chickens doing and what about the sheep across the road. Lots to see while getting the grass under control. 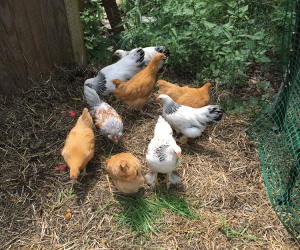 The ‘rooster’ is the odd one in the bunch. The white ones are Light Brahmas and the gold are Buff Orpingtons. We had two other Americaunas, but lost them as babies.

It seems we may have gotten a rooster in this last batch of chicks that are about 12 weeks old. My son and I were checking out the ‘babies’ because he hadn’t seen them for awhile and one just stood right up and crowed – three times. Haven’t heard it since then and it’s hard to tell by looking because it’s one of the Americaunas and they don’t have the huge, obvious comb and waddle. But, I’m pretty sure we have a rooster. So I guess we’ll wait and see how it goes. We may relocate him to the neighbor’s pen if he starts getting nasty. I’ll keep you posted.

The rest of the Summer will be busy as usual for Kim and I with lots of travel. We’ve been home for a while now, but soon we’re off to EAS in Delaware the first week of August. After that to Asheville, NC the end of August for the Beekeeping Institute where Kim will be teaching along with Shane Gebaur, Steve Repasky and Jennifer Berry. Then in September we’re going to WAS in California.

Don’t forget about our annual event in September, the Voices of Bee Culture, right here in Medina. We hope you get signed up and join us. It’s going to be fun!

Have a great rest of your Summer!

By: James E. Tew Beekeeping 2025 – Will hardly a decade really make that much of a difference? What’s so special about 2025? Well, being…