You Say You Want A Revolution…

There’s a quiet revolution going on. Quiet now any-way. If you were paying attention you saw it more capita consumption of honey leaped from 1.27 pounds per person to last year’s 1.51 pounds per person. Right about a quarter pound per person increase. Too, back in 2013 we imported 70% of all consumed honey, and last year – 80%. Domestic production, meanwhile has stayed flat at just over 160 million pounds a year on average. There’s a trend in the making here.

Then, you’d have to be looking in other places to note that not only have the prices paid to beekeepers for pollination services continued to climb, but the number of opportunities for beekeepers to use their bees to make money are increasing. Sometimes the opportunity is to the advantage of the orchard owner, who, say, after almonds, knows that the beekeeper needs a place to be and offers that place…in his orchard. Often for free. But even so, the number of orchards using those bees is increasing, and the number of bees in those orchards, on a per unit basis is increasing also.

Then, take a look at honey import prices. They’ve always been a factor in the honey market in the U.S. Cheap Chinese honey has taken its toll for years, and even with the fees applied to legally imported honey to keep the base price competitive and almost all of it out, the stuff that has snuck in unannounced, the stuff that has been off labeled and attributed to coming from other countries to avoid those fees, and the junk that just seems to get here somehow and get used in…stuff you don’t want to think about, the cost of imported honey just keeps dropping. Canada has it this year, the U.S. has had it for years. Because of these off-shore barrels it’s a constant struggle to sell U.S. produced honey at a profit…or even at a breakeven price.

Now don’t get me wrong some honey sales are booming. The local stuff at wholesale and retail for the most part is doing quite well. Take a quick look at this month’s Honey Report and watch the monthly progression of prices there. Go to a farm market or a local fair, or a mom and pop operation and you’ll find local honey getting the right price for the beekeepers and the shop owners and consumers. Sometimes it works when you do things right. And sometimes the folks selling to the real big outlets do it right and the big outlets will pay higher to get better, but I’ll tell you some-thing I learned, again, this last weekend listening to a roomful of small, medium and big honey producers and packers talk about big outlets like WalMart and the like. They aren’t your friends. Don’t think for a moment they care one bit about you because there are a hundred other honey sup-pliers (foreign and yes, domestic) who will do what you are doing, and do it cheaper, faster, better and complain less. You are as expendable as the cheap help they have stocking the shelves with that cheap honey.

So, if you’re running 500, 1000 or 20,000 colonies what’s a beekeeper to do? The pollination business is doing OK, even excellent. Almonds, blue-berries, cranberries, tree fruit out west are all expanding – some exponentially. And if you work at it you can get three, maybe five crops a season making money on those colonies every time you set them down. Beekeepers in Australia are already figuring this out, and bees into pollination and out of honey production is the rule, not the exception. You don’t make much honey that way, but it costs more to haul that honey from crop to crop than you’re making on it anyway, so who cares about the honey? But that constant pressure on your bees takes its toll, doesn’t it?

So what’s happening is that some of these beekeepers have gotten real good at making bees to keep those boxes full for all those pollination contracts they have all season long. Real good, almost, too good at making bees. So what do you do then? Well, when life hands you a box full of bees, you do what beekeepers do best. Make splits and sell them. Make bulk bees and sell them. Make pack-ages and sell them. In fact, every one of those beginners who wants a pack-age next spring wants some of those bees, and all those hobby folks who lose colonies every winter want bees, and all those pollinators who want to expand, who want to replace, who want to just keep up need bees. Bees, it seems, have become the crop of choice for beekeepers that can grow them. And, if you’re not chasing all over kingdom come for a pollination dollar or a honey half dollar, growing bees gets easier. Less stress, more time to manage, fewer costs to con-sider and a steadier market. There’s no rocket science involved here.

Let’s look at this specialization market a bit further. All of those boxes of bees need queens. Does it make sense to have queen producers man-age thousands of colonies so they have enough bees to sell with their queens? And does it make sense to have those who are good at raising just bees spend time and energy raising queens? Nope on both counts I think. Already this is happening, and I’m pretty sure it’s only going to grow. Queens here, bees there, pollination out there.

Honey, sadly, has become a third world commodity. Our success in convincing the world that honey is as good as we always knew it was has led to the creation of a market that everybody wants a part of. It’s good to have honey in your cereal, in your bread, in your beer, in your granola, in your anything you can put honey in it seems. And it’s easy to produce, easy to manage, easy to adulterate, easy to transship, easy to hide, easy to manipulate, easy to cheat with. So almost everybody in the honey market does, on purpose, or just as part of the chain.

Now bees. That’s another story. Bees are a tougher customer. You actually have to know something to make, keep and sell bees. And unlike honey, they spoil if not taken care of. They die dramatically in fact. And you can’t adulterate bees, you can’t water them down, you can’t overcook them, you can’t harvest them raw and make all manner of claims about their purity, their honesty, what variety they are, or how old they are.

So if the world has decided to dumb down honey as a product, to cheapen it, to destroy it, to essentially remove all of the glamor it had…let it. It’s a race to the bottom. Who can make the worst honey, or honey-like product, for the least money. There’s a game with no winners, that’s for sure. The biggest sellers, the mega-marts and industrial users (that’s a good name for what this has come to), those who aren’t your friends, they’ll check out the cheapest stuff they can find every-time because that’s where they can make a quick buck. But, you can be assured, it won’t last. But it won’t go away fast, either.

So if beekeepers want to stay in business, what do they do? They do what their bees do best. They make food as pollinators, and they give beekeepers what they need when they supply them with the insects they want. Bees aren’t a commodity, yet.  And that’s the game at the moment. There’s more money in bees if you can raise them than honey by a mile. If you can keep them alive, and if you’re not moving all over creation, this is something to look at.

But if honey is still your game, and you don’t want to change be-cause it’s working for you as good or better than ever because of all the other stuff out there, what’s the best way to proceed? We listened to several beekeepers talk about that issue at the A Case For Honey conference we had here in Medina in late October. Several dozen folks listened to our speakers talk about this issue, and others in their business. Producing varietal honey, buying from other beekeepers to resell, selling to small, medium and mega markets, producing a good product while marketing a good product is a job and a half most of the time be-cause both are expensive – and labor is the biggest expense. Marketing next. The speakers simply told us what they did to stay in business, and the overall message was produce a good product, find the market willing to pay what it’s worth and diversify as much as possible. Putting all your honey jars in one market doesn’t work. Selling only honey doesn’t work as well and having several products, selling varieties, selling sizes, selling in different places, selling retail, wholesale and bulk all at the same time, reducing costs in labor, using unique containers, better labels, more efficient equipment, reducing travel, having fewer but better bees….they all add to the equation.

I think you see the trend here, too. You can make a living making honey. But mostly it’s not honey in the barrel. The importers own that market. You, however, can own the one pound market, by offering tastings, having a good label that tells a story, by being the person who deals with the customer, by being honest, and being proud of your product.

The world is changing. Change with it or suffer the consequences. But you can make those changes. Lots of beekeepers here are. Be the one that succeeds, not the one who tries to out-compete the importers.

Wow! Take a look at the inter-views we have this month in our Annual Interview Issue. I’m impressed with the great people our writers found, and the good information they managed to uncover in their discussions. In case you haven’t already looked at the table of con-tents, get a load of these good folks to have a chat with…

And finally, another year has come and is almost gone. It’s been hectic with lots of travel, wonderful progress (we started a new magazine for goodness sakes), too, too busy because of staff changes to get any-thing close to all of it done, but still a fantastic year for us here. We are blessed this year, and all of us here at Bee Culture, BEEKeeping and Root Candles wish you and yours a wonderful and Blessed Christmas, an incredibly Happy New Year and a GREAT beekeeping season in 2017. 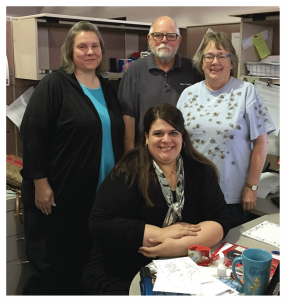 By: Ann Harman Well, this year’s honey crop was a bust. Rain, rain and more rain during the blooming time of this area’s major…