Harvesting and extracting your honey crop in the Southeast region can occur as early as April or May.

In South Carolina May could be the earliest extraction depending on the seasonal nectar flows. Prior to harvest and extracting, the beekeeper has nursed the bees from Autumn through the Winter into the spring with a large enough bee population to make a honey crop. Equipment has been assembled and prepared for the Spring nectar flow. Also, Varroa mite management performed last Autumn through late Winter and early Spring swarm management helped to achieve large populations of healthy bees. 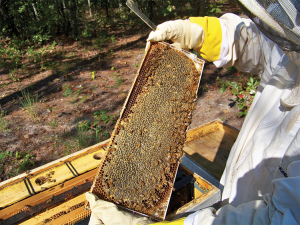 Frame of honey at least 7/8 capped and ready for uncapping and extracting.

How do you tell when the honey is ripe and ready to harvest? The traditional way is when about 7/8 of the frame cells are capped (about 90%). Using this guide, usually it is 18.6% or less moisture to prevent the honey from spoiling by fermentation. The 18.6% figure is the USDA guideline for which most honeys will not spoil. A more modern and accurate way is the use of a refractometer to test the honey’s moisture content. The acceptable figure is again 18.6%.

The honey crop may be removed by brushing the frames, fume board, bee blower, and escape board. If you only have a super or two to remove, removing the individual frames from the super with bees attached, brushing the bees off the frame, and placing the frame without bees into a covered empty super with a lid such as an inner cover works well. The original super with bees can remain on the hive with the bees. Additional frames can be replaced into the super on the hive or the original super can be removed if the nectar flow is almost over.

Another method is the use of a fume board. A fume board is a cover with an absorbent material on the top’s inside surface for the placement of a bee repellent such as Bee Go or Fisher’s Bee Quick. The repellent’s label should be followed for quantity and temperature requirements. The bees are smoked very little, just enough to get them starting down into the colony, then the fume board placed on top. If you smoke the full super too much, the honey will taste of smoke (antidotal experience). Often a super with empty frames is placed under the super you are removing, also known as bottom supering, to allow space for the bees being removed. The fume board should not be left on too long, just long enough to push down the majority of bees. You will then remove the full honey super, cover, and place it in your truck. 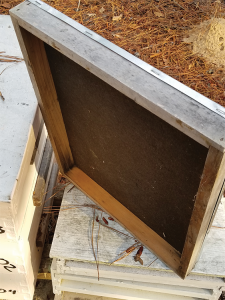 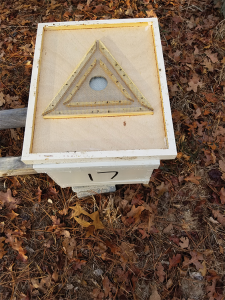 A triangular bee escape board, upside down.

Ever consider A bee blower? A bee blower is essentially a leaf blower where you place the full honey super on a stand on the ground with frames vertical and blow forced air through the full super with the bees exiting the super’s bottom. The full honey super should then be removed, covered, and placed in your truck. The bees removed via this method simply fly back to their hive.

“You can remove bees by brushing, fume boards, blowing or escapes.”

The removed honey should be extracted within a day or two, with two days considered maximum, in the southeast to avoid Small Hive Beetle and wax moth issues. A low humidity (50%), temperature controlled, storage room for supers also helps with Small Hive Beetle control.  To prevent honey standing too long awaiting extraction, only enough honey should be removed at a time that can be extracted in approximately a day. 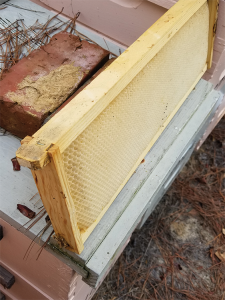 Note the comb drawn past the top bar width with nine frames in a 10-frame super.

Many tools are available to assist in uncapping honey. Essential tools are an uncapping knife, (either cold serrated or heated), an uncapping scratcher to uncap those cells that a knife cannot reach, and a hive tool to separate the supers and remove individual full honey frames. It should be noted having nine frames in a 10-frame super or seven frames in an eight-frame super will result in the bees pulling out the beeswax cells just past the top bar width allowing an uncapping knife to cleanly remove the cell caps. The cell caps are made of fresh beeswax and appear white in color unless tracked up with travel stains (foot traffic) by the bees. Uncapped frames can then be placed in an extractor or uncapping tank. If a capping scratcher is used smaller beeswax particles will get into the honey that will need to be eventually removed to slow granulation and prevent cloudy honey. These smaller particles maybe removed by straining or allowing the honey to settle and skimming.

There are two common types of extractors. A tangential extractor extracts one side at a time and is placed tangential to the extractor’s center. With a tangential extractor you need to be careful how quickly you spin the frame to prevent the frame’s wax comb from blowing out. The frames have to be taken out and reversed to extract the other side. Honey bees consume about 8.4 lb. (3.8 kg) of honey to secrete 1 lb. (454 g) of wax,1 so the comb should be reused whenever possible.

With a radial extractor, the full frames are placed radially in the extractor like spokes on a bicycle wheel. Both sides of the honey frame are extracted at the same time via centrifugal force. The cells slope slightly upwards, between nine and 14°, towards the open ends. A radial extractor is quicker and easier than a tangential extractor but usually more expensive. 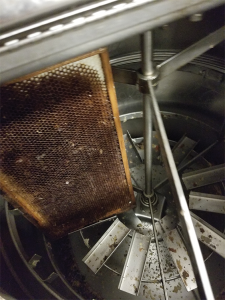 Inside a radial extractor with a brood frame inside for show. 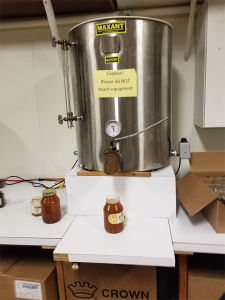 When using an extractor, you can visually see the honey being slung as it collects on the extractor inner walls. When finished, the “wet” empty frames should be placed back on the original hives. This method prevents the spread of disease as well as allows the bees to clean up any residual honey. The wet empty supers should not be placed open in a beeyard when there is a dearth or when the nectar flow is over since the bees will typically tear the comb removing that last bit of honey, and ants, etc. can get into the supers. Wet supers should typically not be stored.

As the honey flows out of the extractor it pours through a sieve to remove beeswax and other unwanted particles on its way into a bucket. After the bucket is full, or extraction is complete, seal the bucket and allow the honey to sit several days to weeks. This will allow the air bubbles to rise to the top surface and debris settle to the bottom. The settled honey can then be poured into a bottling tank for dispensing into jars and other containers or if the bucket has a honey gate it can be bottled directly. (Tip: a piece of plastic wrap placed on top of the bubbles and foam will lift any foam and wax particles from the surface when removed.)

For the small hobbyist a 60-pound/five-gallon plastic bucket with a plastic honey gate is inexpensive and works well for bottling honey. A lid should be used to seal the honey and keep foreign particles and other objects from falling into the honey. A tight-fitting lid is also required to keep water and humidity from entering the honey. A pail perch eases the transfer of honey from a bucket without a honey gate to a bucket with a honey gate to allow all the honey to drain. For the larger operation, a stainless-steel bottling tank with a dripless honey gate works very well. Elevating the bottling tank above the jar height with the honey gate directly above the jar eases filling the jar.

Jars and other containers should be washed and sanitized prior to filling. Never reuse jars or containers. You have the choice between glass and plastic.  Glass jars certainly show the honey better but plastic is optimum for squeeze bears. Also, glass is heaver to ship and handle than plastic but historically I have found the lids can pop off easier with plastic than glass.

When filling jars, the honey level should be filled just past the top ring of the jar. If filled too full, the honey will leak out the top when it gets warm. You want the correct amount of honey in the jar as defined on the label but not too much that will leak out when warm. The jars should be clean of honey on the outside prior to labeling.

Extracting and bottling your honey is exciting and fulfilling! Seeing that “liquid gold” flowing into your bottles is rewarding. Of upmost importance is cleanliness and sanitation in your extracting and bottling operation. The style, size, and other aspects of the containers you decide to use should be determined by your market and the customer base you will be serving.