Sebastian Everding, a self-proclaimed “lobbyist for bees,” has wildflower seeds flowing across Germany, 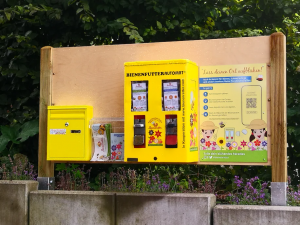 The 130th bee vending machine, this one in Dresden, Germany. (M. Uhl)

BERLIN — It started with a joke.

In spring 2019, eco-gardener and entrepreneur Sebastian Everding marveled over how a German comedian, Oliver Tissot, repurposed an old gumball machine into an “automatic joke machine.” Put in 20 cents, turn a dial and get a classic German joke. Everding thought it was “ingenious” and contacted Tissot. He wanted in.

Everding, then 36, quickly retooled a former gumball machine into a joke dispenser and put it outside his home in Dortmund in the Ruhr River valley. He loved hearing the laughter, but wanted to do more. An avid gardener, he thought of his beloved bees — the pollen-spreading environmental linchpins whose numbers are dwindling under pressure from climate change, pesticides and other threats.

Everding’s next reimagined gumball machine delivered a capsule of wildflower seeds, which passersby could use to create bee habitats in their neighborhoods. His experiment has now grown to more than 160 dispensers across Germany,

Austria and Belgium in places such as libraries and train station kiosks, energy service centers and veterinarian offices.

“The vending machine alone cannot stop the problems with the bees,” Everding said. “But we hope the project changes awareness of the population.”

The decline in bees and other pollinators — butterflies, beetles and more — is another sign of a planet under stress, including ecosystems lost or changed by a warming climate. According to the International Union for Conservation of Nature, at least 1 in 10 bee species in Europe — some existing nowhere else in the world — are threatened with extinction.

A researcher, posting on the U.S. Department of Agriculture site, described the populations of keystone pollinators, such as the western honey bee, as “at a critical crossroads” that could threaten more than 100 U.S.-grown crops that rely on bees and other natural pollen spreaders. Up to 70 percent of the main crops grown for human consumption depend on insect pollination, according to the International Union for Conservation of Nature.

In Germany, Everding built partnerships with Bienenretter Manufaktur, which promotes sustainable beekeeping and other eco-friendly initiatives, and the FINE Frankfurt Institute of Sustainable Development, which created an educational component around the seed dispensers, dubbed “Bienenautomats.”

“Let’s make something really crazy to make the world a better place,” Everding told Tissot at the time.

To read the complete article go to; Bees are in decline due to climate change. A German gardener is using old gumball machines to help. – The Washington Post