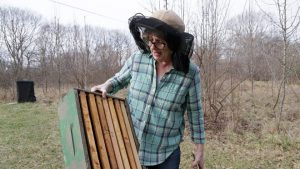 Nina Bagley carefully lifted the lid on one of her hives, revealing a cluster of honey bees crawling over piles of granulated sugar and patties of winter bee food.

Although it was a mid-January day, the afternoon high temperature had crawled into the low 40s, keeping the bees active and looking for nourishment in Bagley’s hives, tucked away in a field off Greenlawn Avenue on Columbus’ West Side.

Bee activity slows greatly in northern winters, but the colonies need to feed, especially when temperatures rise. Failing to maintain and wrap hives and care for bees during the winter can lead to the death of the colony come spring, Bagley said.

After 20 years of caring for her own hives and with a certificate as a master beekeeper, the German Village resident was well prepared to become Franklin County’s apiary inspector last year.

Earlier this month, the county commissioners allocated $12,000 for Bagley to continue in that part-time job again for the upcoming six-month season, which begins in the spring.

“I have kind of a gift of gab, salesperson kind of thing,” she said. “So when I can’t go out, I’ll pick the phone up and start calling everybody.”

Those calls help her know what’s going on among the county’s beekeepers and smooth the way for her eventual inspections.

Apiary inspectors in Ohio: What do they do?

It’s also a critically important job. Apiary inspectors in Ohio keep tabs on the health of bee colonies, watching out for pests and diseases that have decimated bee populations in recent decades, and educating beekeepers about proper bee management.

Bees and other pollinators are essential to the survival of more than 100 American crops, according to the U.S. Department of Agriculture.

Franklin County has 370 registered apiaries — more than any other Ohio county — with a combined 922 colonies. But eight other counties have more than 1,000 colonies, topped by Paulding County in northwest Ohio with 2,413.

Bagley is one of 55 county apiary inspectors in Ohio, some of whom handle multiple counties. A half-dozen of Ohio’s 88 counties didn’t have an appointed inspector in 2021.

After an inspection is conducted at an apiary, the inspector files a report of his or her observations to the Ohio Department of Agriculture.

The state apiary inspector, Barbara Bloetscher, compiles the information from throughout the state to keep beekeepers informed about problems and address them before they worsen or spread from one apiary or county to another.

“There are several very contagious, deadly diseases and pests that can spread quickly,” Bloetscher said. “Varroa mites, the No. 1 pest for honey bees, hitchhike on the bees and go from colony to colony. You can have strong colonies yourself and are keeping your mite levels low, but someone down the road may not be controlling their mites. Those mites can get into your colonies, and you can lose your colonies.”

The emergence of the varroa mite in the mid-1980s was the first major blow to Ohio’s bee population. From 2006-2009, the nation’s bee population was devastated by colony collapse disorder, which hit Ohio and Pennsylvania the hardest.

In the past 30 years, the number of bee colonies in the state has fallen from about 300,000 to 50,000, according to state agriculture department records.

An annual survey conducted by the nonprofit Bee Informed Partnership found that beekeepers across the U.S. lost 45.5% of their managed honey bee colonies from April 2020 to April 2021. In Ohio, it was 55.2%.

Reducing the loss and replacing the lost colonies is a constant battle, Bloetscher said.