Bees and the Web that Traps Them
By: Jay Evans, USDA Beltsville Bee Lab

While big injuries, exposures and accidents are always a risk, it is more often an accumulation of small insults and decay that bring down honey bee colonies. Baffled by not being able to find a singular cause for Colony Collapse Disorder, we coined ‘pathogen webs’ ten years ago to describe what was actually seen in collapsed colonies (Robert Cornman and colleagues, Pathogen Webs in Collapsing Honey Bee Colonies, 2012, PLoS One, https://doi.org/10.1371/journal.pone.0043562). Troubled bees contained multitudes of microbes, but those multitudes were different from Bakersfield to Okeechobee and from Harrisburg to central Texas. We might have missed the forest for the trees, as I mused for Bee Culture in C-C-Decade, (2018, https://www.beeculture.com/found-in-translation-13/) but perhaps the multitudes would have given us better insights if we had just waited long enough.

Dr. Renata Borba, from Agriculture & Agri-Food Canada’s Beaverlodge Research Farm (and now with the Alberta Beekeepers Commission), led her Canadian colleagues in a tremendous project to identify web players and ultimately connect them with poor colony health. Their open-access study, Phenomic analysis of the honey bee pathogen-web and its dynamics on colony productivity, health and social immunity behaviors, (2022, PLoS One, https://doi.org/10.1371/journal.pone.0263273), one-ups, or rather three-ups, prior work. 1) They sampled far more extensively both at each sample point (hundreds of bees) and across the country, 2) they looked at other key colony traits, from behaviors to honey yield, and 3) they checked up on their patients, gleaning data from one season to the next, important for assessing what really matters in sustainable beekeeping.

With over 1500 bee colonies, mostly started from packages, they had many opportunities to see how bee traits, management, and bad luck could lead to colony losses and honey production. You should read and discuss the paper to get more of their insights, but here are a few that stood out. 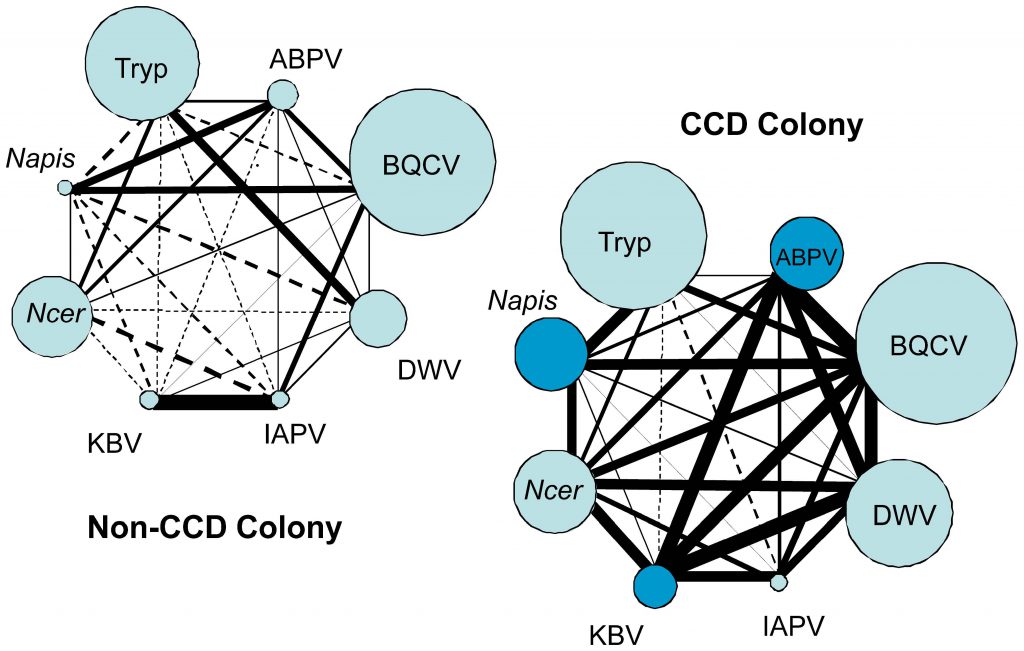 First, hygienic behavior really works: Colonies that scored high for a freeze-killed brood assay or for signs of grooming (in the form of mangled mites on the bottom board or in the sheer number of mites dropping over three days) showed lower mite growth rates, lower virus levels, and generally fared better. In fact, in the first year of the study, when 1000 colonies were vetted, 14/16 negative traits, from virus loads to mite numbers in multiple seasons, decreased significantly as hygiene scores (freeze-killed brood assay) increased, and the other two traits were non-significant but trending negative. The two other signals of grooming were not significantly tied to as many traits, although this might reflect the difficulty in quantifying these traits more than their importance as a form of social defenses against mites. In fact, in the second year the grooming ‘mite-damage’ score was a better correlate with decreased disease risk. This is comforting news and rare data for the colony level.

The study also quantified the importance of mite control on bee health. Mite numbers (as measured by alcohol washes) were positively tied to viral and nosema disease, and negatively tied to cluster size at both the time of measurement and the start of the next Spring. Several mite-transmitted viruses also showed predictive value for the state of colonies in current as well as subsequent seasons. Since there are not yet direct controls for viruses, the authors recommend effective mite controls coupled with selection for hygienic traits as the best way to decrease this threat. Interestingly, ‘total mite count’ in colonies was positively tied to sealed brood, in large part because of the ample mites found reproducing in sealed brood. This measurement was made by longterm exposure of colonies to amitraz while collecting fallen mites via sticky boards and is not normalized by the net amount of bees or brood. Results showing that mite control improve colony odds are not new, but the consistency of this work across Canada when compared to longterm studies in the U.S. and Europe suggests that Varroa and its viral partners remain the biggest drain on honey bees in most places. Another 2022 study, by Julie Hernandez and colleagues in Switzerland, showed 25-fold higher colony survival rates when beekeepers followed recommended mite treatments (Compliance with recommended Varroa destructor treatment regimens improves the survival of honey bee colonies over Winter, 2022, Research in Veterinary Science, https://doi.org/10.1016/j.rvsc.2021.12.025). The Borba study from Canada gives hope that some of the treatment burden, at least, can be reduced via good genetics. 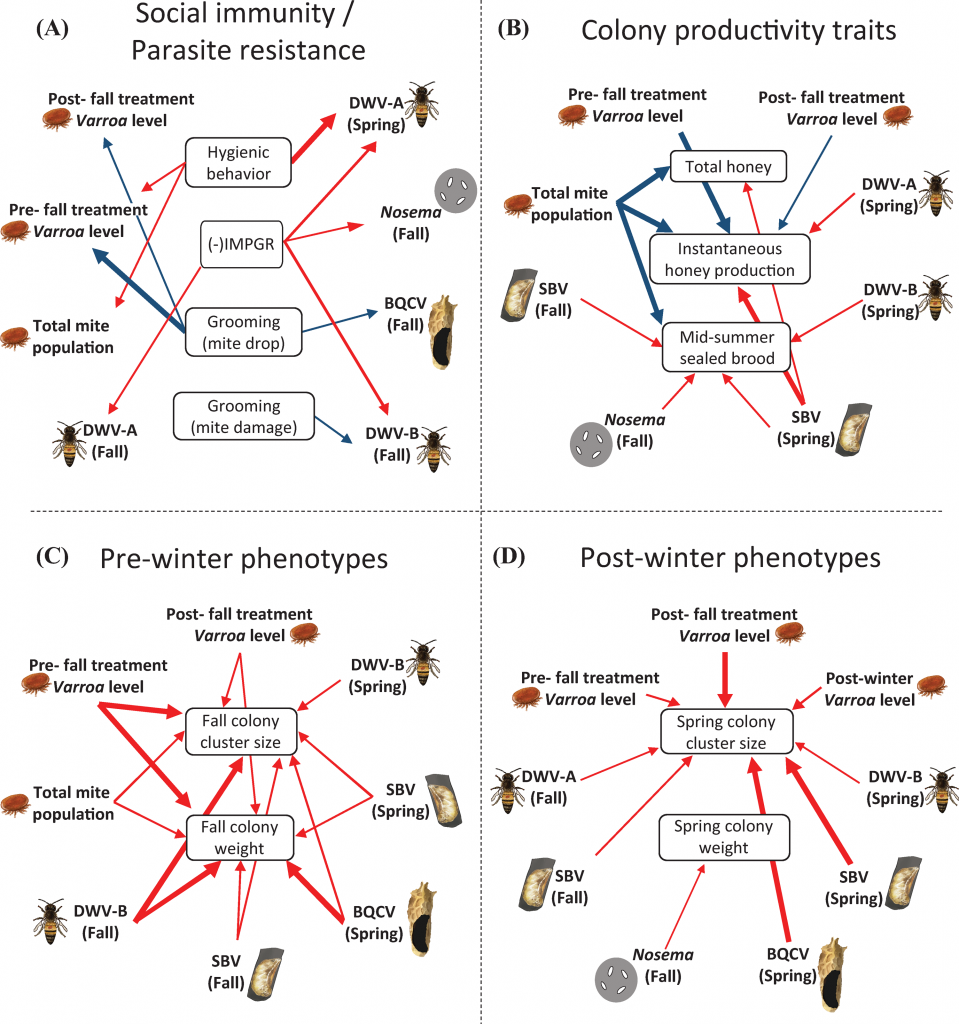 Borba and colleagues refine additional yardsticks beekeepers might use to predict colony health and treatment regimes. While the results are confined to the eight populations studied, the authors argue that Spring colony weight is a poor predictor of current or future health, in large part because of greater honey stores in declining or lost colonies when compared to colonies that were ready to really take off. This is most evident in the first Spring cohort. Conversely, Fall colony weight does seem to predict disease load and, by correlation, colony health status in the Spring. Worker bee cluster size was a robust predictor of mite and disease status in both fall and spring, and this measurement is preferred.

The authors will report separately on the impacts of different management schemes (mite regulation and indoor versus outdoor storage) that varied across beeyards in this immense experiment. Integrating genes, behaviors (human and bee) and climate across a wide country is sure to give helpful insights for beekeepers everywhere, so keep an eye out for that study. In the meantime, mind the web and beat the mites.