Having honed my endurance by watching dozens of Winter Olympic events (who knew curling was so TV-friendly and intense?), this month I am ready to tackle not a couple but 17 new works: specifically, a compilation by members of the American Association of Professional Apiculturists (comprised of Apiary Inspectors, researchers and educators who work with honey bees, along with a few passionate beekeepers, https://aapa.cyberbee.net/). The AAPA joins one of the two major national bee industry meetings each year via their American Bee Research Conference (the results of which have been presented in Bee Culture this month and last) and every few years officers of the AAPA collect and edit a series of peer-reviewed papers from our field. This time, Drs. Michael Simone-Finstrom (USDA-ARS), Hongmei Li-Byarlay (Central State University) and Margarita M. López-Uribe (Penn State University) edited papers for two rounds in the freely available Journal of Insect Science (https://academic.oup.com/jinsectscience/issue/21/6 and https://academic.oup.com/jinsectscience/issue/22/1). This Special Collection “Honey Bee Research in the United States: Investigating Fundamental and Applied Aspects of Honey Bee Biology” truly has something for everyone.

For those interested in bee disease, four works tackle Varroa mites. Bee Culture writer and scientist Jennifer Berry and colleagues from the University of Georgia and Auburn University show the good and the bad of repeated mid-season oxalic acid treatments (in this case by vaporization; https://doi.org/10.1093/jisesa/ieab089). Quite ambitiously, they treated colonies every five days, seven times in a row, in the middle of Georgia and Alabama Summers. This held mite levels in check in treated colonies while, in two of three years, untreated colonies showed the predicted seasonal mite increases. Overall, the ‘percent mite intensity’ (mite counts per 100 bees) differed by five mites in treated versus untreated colonies, almost entirely due to increases in the latter. Colonies themselves survived the aggressive treatment regime fine and in one trial the treated colonies showed a trend toward having more food stores. No word yet on how colonies with diminished mites fared during late-season and Winter challenges.

Cameron Jack and Jamie Ellis (University of Florida) reviewed the available integrated pest management (IPM) strategies for Varroa in the U.S. (https://doi.org/10.1093/jisesa/ieab058). They started by defining the mite levels that result in unacceptable injury and economic damage to honey bees and beekeepers, respectively. Prior to that are thresholds for management action. In general, the ethic of IPM is to avoid risk altogether by breeding or isolation, monitor often, and then apply gradually more and more aggressive control methods when mite impacts are imminent. The authors covered the latest recommendations on mite counts, available controls, and vailable bee stock that might help delate or avert escalation.

Kate Ihle and USDA-ARS colleagues tackled a potential form of mite resistance to Varroa. They label social apoptosis, namely a tendency for parasitized brood to give up and die when capped, perhaps sealing the fate of their mite parasites (https://doi.org/10.1093/jisesa/ieab087). They found some differences in this tendency across different bee lines and also a striking effect of the colony environment. By rearing brood from egg to sealed brood in common colonies, they showed that bees raised in colonies with high mite loads tended to die at higher rates.

Finally, Taylor Reams and Juliana Rangel review the state of knowledge for mite genetics and behavior (https://doi.org/10.1093/jisesa/ieab101). To explore diagnostic tools for European foulbrood, Meghan Milbrath and colleagues at Michigan State University and USDA-ARS (including myself) pitted three diagnostics based on microscopy, genetics, and a commercial antibody test against each other (https://doi.org/10.1093/jisesa/ieab075). For 77 cases of true EFB, and nearly 400 larvae, all three methods behaved similarly.

Several authors focused on the stresses faced by bees in managed farmlands. Dylan Ricke and colleagues from the Ohio State University measured the effects of agrochemicals on honey bee queen development (https://doi.org/10.1093/jisesa/ieab074). The insect growth regulator diflubenzuron was especially damaging, reducing queen survival to adulthood by more than 80% when presented in pollen at field-relevant levels. This paper also provides critical data for the persistence of chemicals and adjuvants from pollen to royal jelly to developing bees.

Bradley Ohlinger and colleagues at Virginia Tech University looked at the impacts of sugar syrup laced with 26 parts per billion of imidacloprid on foraging and recruiting (https://doi.org/10.1093/jisesa/ieab095). Foraging trips decreased by a third, a significant result, while there were trends toward reduced dancing by returning bees to direct their sisters to food.

Arathi Sehadri and Elisa Bernklau (USDA-ARS) found that plant chemicals found in nectar and pollen can interact with a common insecticide, thiamethoxam, to either increase or decrease risk to honey bees, depending on conditions (https://doi.org/10.1093/jisesa/ieab053). Michael Simone-Finstrom and colleagues described the impacts of local bee colony transport on stress genes and disease agents in bees (https://doi.org/10.1093/jisesa/ieab096). These are hard experiments because bees on the move face different foods than those left behind. Here, through a clever use of bee-swapping after migration they were able to decouple in-move stress versus lasting effects and did see some minor changes in pathogens for both. As someone who has puzzled for years over the web of microbes in bees and their importance, this paper also offers a strong look at how microbes and bee traits like immunity relate to each other. To add layers to that complexity, in a provocative but hard read for many of us, Maggie Shanahan from the University of Minnesota presents the case that we are missing the forest for the trees (https://doi.org/10.1093/jisesa/ieab090). With some tough-love for both researchers and the beekeepers we support and respect, she argues for a major upheaval of current practices. She is an excellent writer and this essay provides food for thought and thought for food.

No compendium of bee science is complete without some love for reproduction and this batch has several papers on this topic. Sarah Lange and colleagues from Louisiana State University and USDA-ARS shed light on how treating or ‘priming’ a queen might lead to better immunity for her thousands of offspring (https://doi.org/10.1093/jisesa/ieac001). I described some early evidence for this in Bee Culture in 2017 (https://www.beeculture.com/found-in-translation-3/) and it remains a hot topic today. By carefully exposing queens to a virus either through oral exposure or through the fluids used in instrumental insemination, Lang and colleagues found evidence in one trial that consequent offspring (from nine queens treated via insemination fluids) were indeed less prone to virus infection. Regrettably, in round two of the same experiment ‘primed’ queens produced MORE vulnerable offspring. In both cases the results, yeah or nay, were significant, suggesting that bee genetics or underlying infections affect the outcome…not quite ready for prime time but exciting nonetheless.

Also exciting are new ways for bee breeders to improve their selection routines. Kaira Wagoner from the University of North Carolina-Greensboro, with longtime leaders in bee behavior and hygienics, described a brand-new assay for identifying hygienic stock (https://doi.org/10.1093/jisesa/ieab064). Using a cocktail of smells released by stressed bee larvae, they vetted colonies for the tendencies of worker bees to identify and clean out parasitized sisters. The assay, based on ‘Unhealthy Brood Odor’ (UBO), held up well against the freeze-killed brood assay, is safer for humans, and relies on only a tiny circle of brood. Stay tuned as Dr. Wagoner and team develop this into a package breeders can acquire and use. For now, just remember that if UBO, then UBD (you be dead).

Bradley Metz and colleagues from North Carolina State University and Mississippi State University present an analysis showing exactly how nurse bees react to these types of smells (https://doi.org/10.1093/jisesa/ieab085). With significantly less stress (being blocked from receiving food for four hours), developing larvae were able to attract a larger crowd of attendant workers during the next hour. The researchers did not quite succeed at isolating this ‘HBO’ (‘Hungry Bee Odor’) at the chemistry level, but the result alone suggests a volatile or surface mix of chemicals does bring a helpful response. They also found that hunger cues isolated from deprived larvae can lead to greater pollen foraging at the colony level, a result with great practical and biological implications.

Males (drones) were not ignored in these articles, starting with a demonstration of the physiological stages of drone bee sex parts as they mature by Colby Klein and colleagues from the University of Saskatchewan, Canada (https://doi.org/10.1093/jisesa/ieab064). Along with confirming that drones take longer to mature in cooler Spring temperatures (a four-day difference between June and July), this paper gives a day-by-day ‘expected’ state for drone testes. This roadmap can be used in future studies aimed at the many biological, temperature, and chemical stresses that impact fragile males.

Next, Bradley Metz and David Tarpy from North Carolina State University gave an overview of drone quality for U.S. bees (https://doi.org/10.1093/jisesa/ieab048). They first generated a useful metric for good males by contrasting many measurements for drones reared in drone cells with those reared, atypically, in worker cells. As expected, drones reared in the right places looked better and performed better. This separation fed into statistics for what a healthy drone SHOULD look like when emerging from a drone cell. 2% of such drones actually fell into the worker-cell category, while 17% orfworker-cell drones came out ready to battle equally with drones reared in drone cells. They also compared drone quality across 19 operations and found substantial variation. As with their excellent work on queen quality, these tests were not designed to shame specific breeders but perhaps to guide them in ways to do better.

In another attempt to understand how genetic and environmental backgrounds favor survival in bees, Kilea Ward and colleagues from Central State University measured longevity of foraging worker bees plucked from traditional and feral colonies (https://doi.org/10.1093/jisesa/ieac002). Bees from feral colonies survived significantly longer when held in an incubator, while also showing more signs of oxidative stress. How they were able to tolerate that stress remains an open question.

Finally, for fascinating natural history, you should read Willard Robinson’s story of the most bird-like bee, Apis dorsata, a species that moves miles and miles as a colony across the seasons, and in search of forage (https://doi.org/10.1093/jisesa/ieab037). These colonies move over 100 miles, apparently to the same spots, and he discusses the conundrum of who drives the return when surely most, if not all, workers die between migrations.

These papers reflect the passions of researchers to better understand our favorite insect and to use science to improve their survival. Reading these great works at once felt like doing a 17-stage beeathlon, so it’s back to curling on the couch for now. 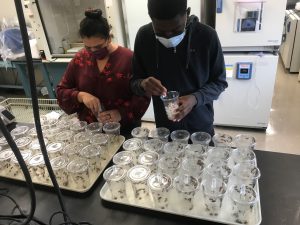 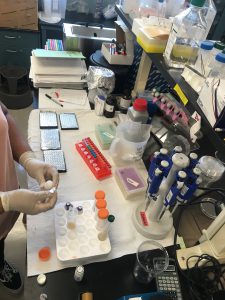