Anyone who observes a swarm of bees launch into flight and move off to its new home is presented with a mind-boggling puzzle: how does this school-bus sized cloud of some 10,000 insects manage to fly straight to its new dwelling place? Its flight path may extend for several miles and traverse fields and forest, hilltops and valleys, and even swamps and lakes. What is most amazing is the precision of the flight guidance, for the swarm is able to steer itself to one special point in the landscape, e.g. a specific knothole in one particular tree in a certain corner of a forest. And as the swarm closes in on its destination, it gradually reduces its flight speed so that it stops precisely at the “front door” of its new home. The mystery of how the thousands of bees in a swarm accomplish this magnificent feat of precisely oriented group flight has been carefully probed in recent years using sophisticated radar tracking, video recording, and image processing technologies. In this article, we will review the main findings of these investigations.
First, let’s define the problem a bit more precisely. Several studies (Seeley et al. 1979, Seeley and Buhrman 1999) have revealed that only three to four percent of the bees in a swarm have visited the new home site in advance of the swarm’s move to it. This small minority of well-informed bees consists of all the scout bees that visited the chosen site during the swarm’s process of choosing its dwelling place (reviewed by Visscher 2007, Seeley 2010). Therefore, when a swarm flies to its new home, it relies on a relatively small number of informed individuals – some 300 to 400 individuals in an average-size swarm of 10,000 bees – who must lead all the rest to their destination. How does this system of leaders and followers work? 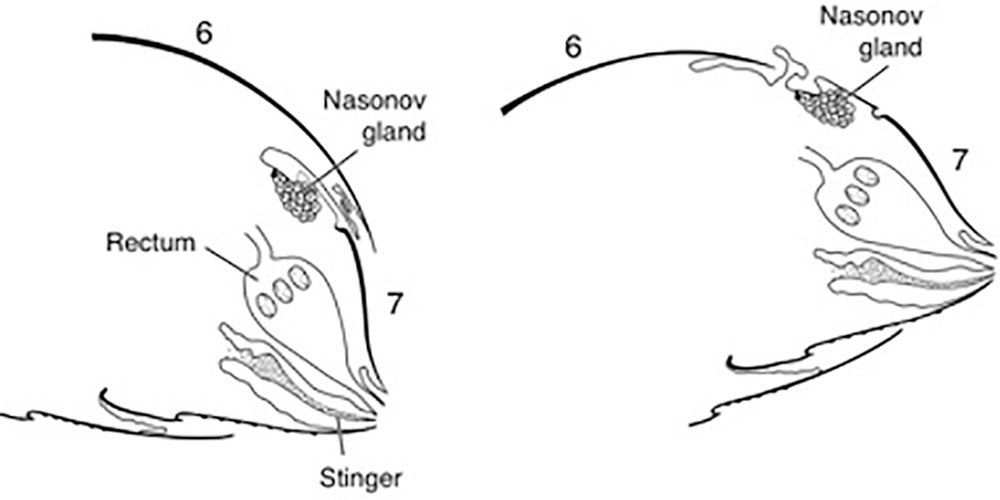 One possibility is that the leaders provide flight guidance by means of the attraction pheromones produced in the Nasonov gland that is part of the scent organ at the tip of a worker bee’s abdomen (Fig. 1). The leaders might discharge these pheromones along the front of the swarm cloud to attract, and thereby guide, the other bees to move in this direction. This hypothesis was tested in a study (Beekman et al. 2006) with three swarms – each consisting of a queen and 4000 workers – in which every worker bee had her scent organ sealed shut with paint. Each swarm was tested for its ability to perform a well-oriented, full-speed flight to a bait hive in the center of an open field. As a control, three other swarms of the same size were prepared in which every worker bee had a dot of paint applied to her abdomen but without sealing off her scent organ. Their flight abilities were likewise tested. Both treatment and control swarms flew directly and quickly to the bait hive, but the treatment swarms took much longer than the control swarms (20 min vs. 9 min, on average) to move into the hive once they reached its location. This experiment showed that the leaders in a swarm do not provide flight guidance using the Nasonov gland pheromones, but that they do use these pheromones to help the followers find the entrance of their new home.

Figure 2. Schematic view of the flight patterns of bees in a swarm flying to the right. Lindauer reported observing streaker bees mainly in the top of the swarm cloud.

A second way that the leaders could provide flight guidance is by means of visual signals. One way they might do so is by repeatedly making high-speed flights through the swarm cloud. They could do this by shooting forward in the top of the swarm cloud until they reach its front and then by flying slowly to the rear of the swarm along its bottom or sides (Fig. 2). Martin Lindauer, the German researcher who pioneered the study of house-hunting by swarms, reported seeing several hundred “streaker bees” shooting through the tops of flying swarms, and he speculated that they were signaling the flight direction (Lindauer 1955).

Lindauer’s observations have recently been confirmed in a study that used harmonic radar tracking of the flight paths of individual leaders (scouts) during the takeoff and first few minutes of flight of two swarms (Greggers et al. 2013). Only one of two swarms observed in this study flew all the way to its destination, and in this swarm just two leaders had their flight maneuvers tracked, but both bees displayed the streaker-bee behavior. High-speed flights were made in the direction of the swarm’s destination and these were separated by slower rearward flights and stationary loops. The slow-speed maneuvers of the leaders moved them to the rear of the swarm cloud, hence to the right place to start another high-speed flight forward through the swarm. The results of this study support the streaker-bee hypothesis for swarm flight guidance.

Further support for the streaker-bee hypothesis comes from a study in which the movements of thousands of individual bees in a swarm were tracked simultaneously, and measurements were made of each bee’s position, flight direction, and flight speed (Schultz et al. 2008). The goal was to get information on the movements on all the bees in a flying swarm to see if, as predicted by the streaker-bee hypothesis, the high-speed fliers in a swarm are indeed shooting toward the swarm’s new home. This study also aimed to check Lindauer’s report that streaker bees are seen mainly in the top of a flying swarm. This makes sense since this location would render these bees conspicuous – as dark objects against the bright sky – to all the rest of the bees in the swarm, but it still required to be checked. 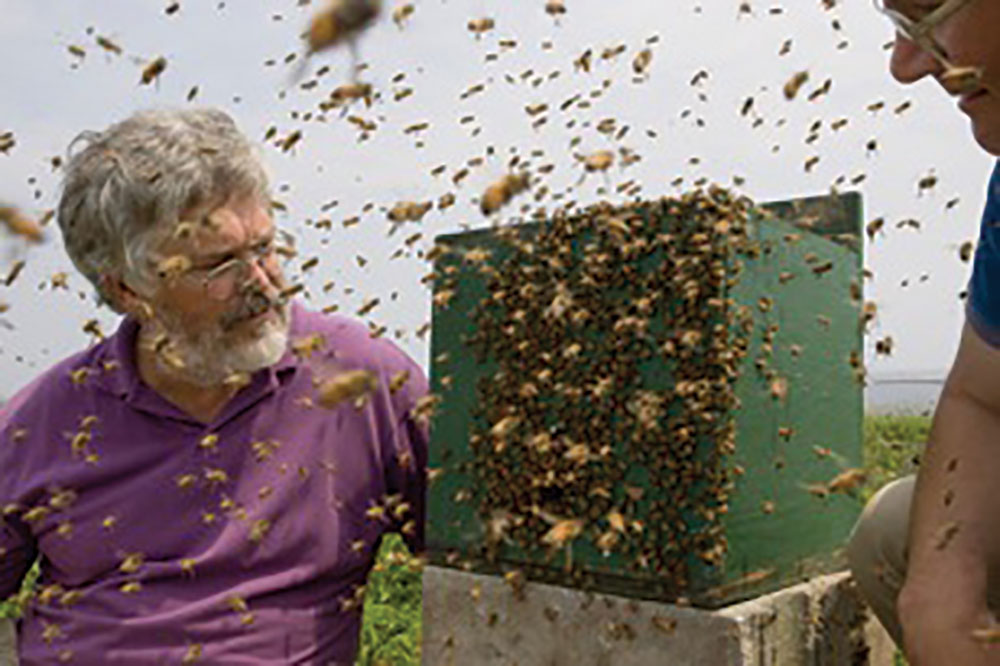 Figure 3. Kirk Visscher, left and Tom Seeley in 2006, watching a test swarm move into a bait hive on appledore Island, in the State of Maine. (photo by Peter Essick

The study began by having a swarm fly over a high-definition video camera. The camera was equipped with a wide-angle lens so that it could “see” the full width of the airborne swarm. The camera also had an extremely high shutter speed – one ten thousandth of a second – so that within each frame of the video recording each bee appeared as a short, ellipsoidal blob rather than a long streak. To have the swarm fly directly over the camera, the recording was made on a treeless island six miles out in the Atlantic Ocean where the only desirable home site was a bait hive positioned 820 feet from the swarm (Fig. 3). The camera was positioned 50 feet from the swarm’s bivouac site along the swarm’s flight path to the bait hive. The same swarm was forced to make two complete flights to the bait hive, and each time (thankfully!) it flew squarely over the video camera.

With these two recordings of swarm flyovers “in the can,” the next step was to use point-tracking algorithms invented by engineers working on computer vision to make three-dimensional reconstructions of the individual bee’s flight movements within the flying swarm. The procedure involved examining each ellipsoidal blob (bee image) in a given video frame and then pairing it up with the blob on the next video frame that represented the same bee. This process was repeated with the blobs of the second frame being paired with blobs of the third frame, and so on, to build up, frame by frame, detailed trajectories of individual swarm bees as they flew across the video camera’s field of view. The size of each blob indicated the height of the bee above the camera, so the bees in the top and bottom portions of the swarm cloud were distinguished. 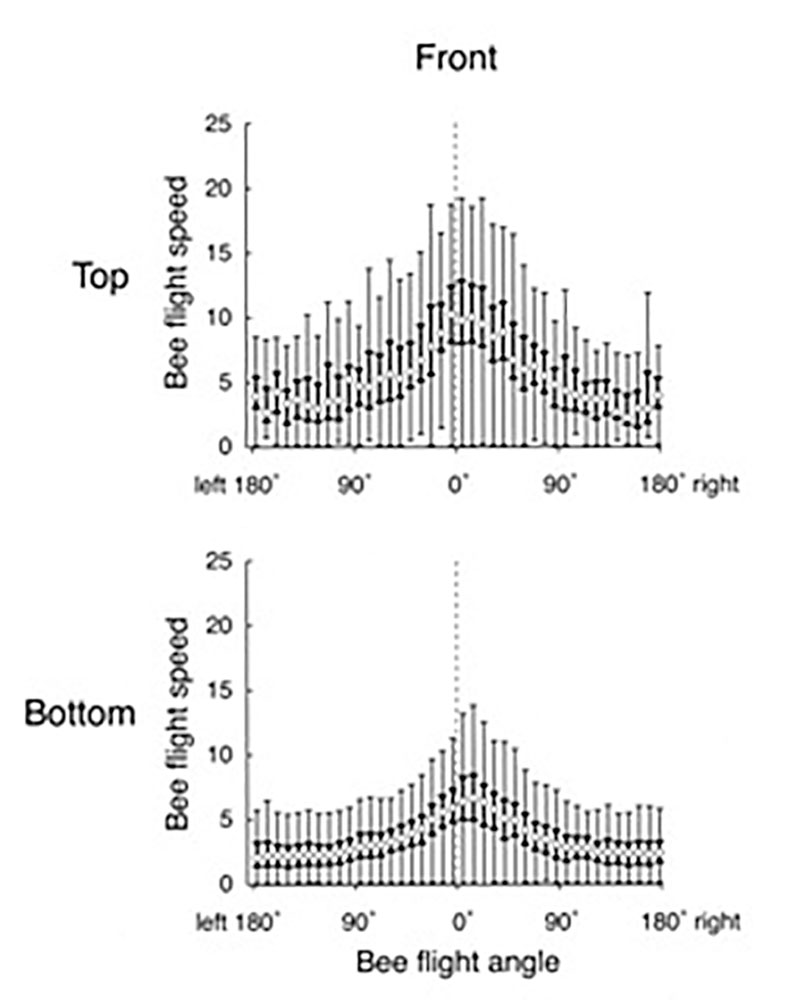 Figure 4. Flight speed vs. flight angle for the bees in a flying swarm when it had flown 50 feet from its bivouac site. Bees with a flight angle of 0° were flying straight toward the new home; all the rest were flying at some angle to the left or right of the direction to the home site. The measurements of the flying bees are shown separately for the top and bottom layers of the swarm cloud. The units of flight speed are bee lengths per video frame.

The most important finding revealed by this painstaking analysis of the video recordings is that the fast-flying bees were indeed streaking in the direction of the swarm’s flight, i.e., toward the nest box. And, as is seen in Fig. 4, which shows the individual bee’s flight speeds in relation to flight direction, the speediest bees were flying directly toward the new home while the slowest ones were heading in the opposite direction. By comparing the plots for the top and bottom portions of the swarm cloud, we can also see that the speedsters were mainly found in the top portion of the swarm. It was further revealed that not only did bees that flew in the direction of the new home tend to fly with the highest velocities, but that they also tended to accelerate (increase their velocities) as they moved from the rear of the swarm cloud to its front. It seems likely that some of this rise in flight speed came about as some follower bees “latched on” to the leader bees, boosting their speed by chasing after the leader bees. If so, then the information about flight direction probably spreads from the informed bees (leaders) to the nearby ignorant bees (followers) who, through their own faster flights, will start to influence other ignorant bees. This chain reaction of informed bees begetting more informed bees could lead to a widespread induction of bees to fly toward the swarm’s destination and to fly faster. This can explain the increase in swarm flight speed over time that is shown in Fig. 5, and that is so impressive to any beekeeper who has tried to follow a fugitive swarm to its new home by running along beneath it. 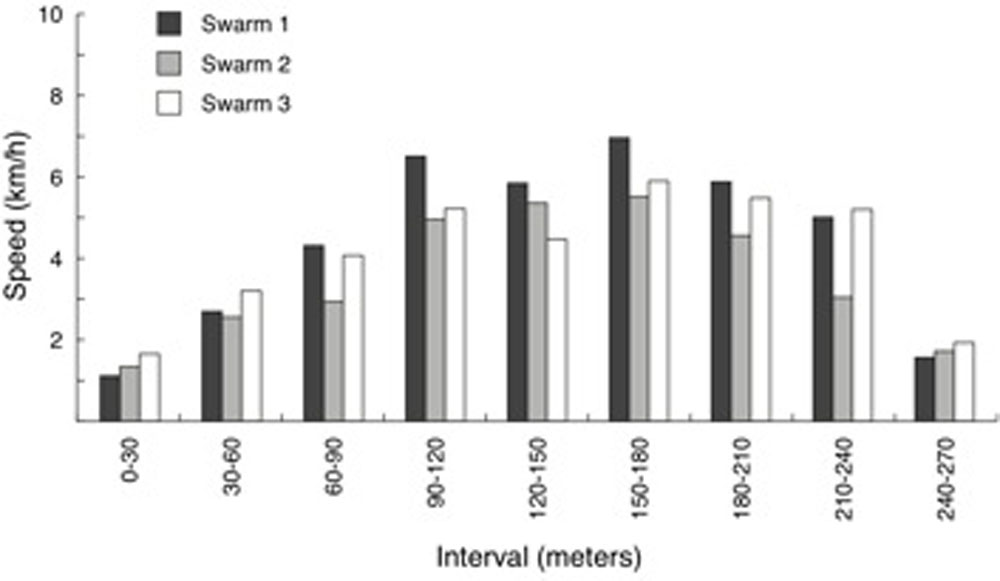 Many questions remain unanswered about the remarkable flights of honey bee swarms. How does the moving group “apply the brakes” when it is within 90 m, or about 300 feet, (see Fig. 5) of its new residence? Also, how exactly do the informed bees make their repeated streaker flights through the swarm cloud? Do they tend to stop when they reach the front and let other bees fly past, or do they usually fly rearward underneath the swarm, where they may be nearly invisible against the dark vegetation below? And how is it that virtually all the scout bees who have visited the chosen home site, and so can steer the airborne swarm to it, leave the future dwelling place and assemble back on the swarm shortly before it launches into flight? It certainly makes sense for all these scout bees to return to the swarm before it takes off, for we have seen how only three to four percent of a swarm’s membership know its flight plan. And with such a small minority of navigators, it must be important to have as many as possible on board. Do scouts lingering at the home site fly back to the swarm in response to feeling, seeing, or smelling some “Time to leave!” signal produced by scouts that have sensed that the swarm’s liftoff is imminent and then have made a special trip to the home site to recall everyone? We wouldn’t be surprised if the bees possess some secret gadgetry for ensuring that a swarm about to take flight is well stocked with the informed bees who can pilot it safely to its new home.

Tom Seeley is a Professor of Biology in the Department of Neurobiology and Behavior at Cornell University, Ithaca, New York, USA. He is also a passionate hobby beekeeper.

Ann Chilcott is an author and beekeeper who currently serves as a Trustee and the North Area Representative for the Scottish Beekeepers Association. She holds the SBA Advanced Beemasters Certificate and mentors new beekeepers in rural Nairnshire, Scotland, where she lives.