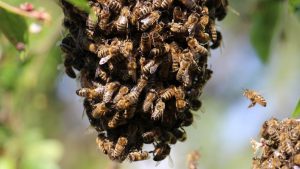 Authorities will begin baiting feral bees in a single red eradication zone next week, more than three months after varroa mite was detected at the Port of Newcastle.

While destroying feral hives has been a key part of the NSW government’s varroa mite eradication strategy, the Department of Primary Industries (DPI) said it had been unable to do that while there were managed hives in the zones.

“Managed hive bees will pick up the bait and then go into their nest and then the managed hive gets killed, there’s no way then of identifying whether there was a live hive or a dead hive sitting there,” chief plant protection officer Satendra Kumar said.

The DPI will use the insecticide fiprinol in baits to attract the feral European honey bees, which take the poison back to their hives.

The baiting program will start in the 10-kilometre red eradication zone of Jerry’s Plains in the Hunter region, where all 19 managed hives in the zone have already been euthanased.

Dr Kumar said the baiting stations would be monitored and could be in place for up to 12 months.

“We’ll do our first round then we’ll come back [for] a number of rounds and if you’re no longer attracting any bees then that’s an indication there’s no longer any bees present,” he said.

The DPI will continue euthanasing managed hives in other red zones before opening those up to feral bee baits.

A leading bee expert said all feral bees in the red zones must be destroyed if eradication of varroa mite in Australia was to be successful.

Bruce White OAM, who worked for the NSW DPI as an apiary officer for more than 40 years, said the challenge was to find every feral bee colony in the state’s red zones.

“There’s a massive amount of feral bees in that area so DPI, to eradicate varroa from this state, needs to kill every feral bee in every red zone to prevent the spread of varroa reinfecting hives in the future,” he said.

He said there used to be as many feral honey bees as managed bees in NSW.

“Our flora is very suitable for honey bees because of the eucalypts having a lot of hollows in them, and bees are cavity dwellers so therefore there’s a lot of feral bees,” he said.

“And the evidence is where many species are supposedly all being killed, there’s still a lot of bees being observed on flora.”

Dr Kumar said he did not think the roll-out of the feral bee baiting program had come too late because authorities were yet to find any mites in feral nests.

“But having said that, there’s every likelihood, especially in the areas where the infestations of varroa mite were high, that there might be some bees carrying the mite and therefore we want to make sure that we’ve got rid of those feral hives and bees,” he said.

We are here to share current happenings in the bee industry. Bee Culture gathers and shares articles published by outside sources. For more information about this specific article, please visit the original publish source: Feral honey bees to be poisoned in NSW varroa mite hotspots to prevent spread of parasite – ABC News