In the February edition of Bee Culture we looked at some of the scientific evidence of harm that radiofrequency electromagnetic radiation (RF-EMR) emitted by our modern communication devices like cell phones, WiFi, cell towers, smart meters can have on insects and honey bees. We continue this exploration this month beginning with a look at queens.

Real world multi-stress situations
It is clear that the EMR we rely on everyday has the potential to stress biological organisms but most of us and the wildlife around us are exposed to multiple simultaneous stressors daily. This led one group of researchers to look at the combined effects of both EMFs and pesticides together on honey bee colonies. Three apiaries were established: one control site removed from direct human induced stress, one pesticide stress site, and one multi-stress site which added to the same pesticide exposure the presence of EMFs from a high voltage electric line. The multi-stress site exhibited the worst health conditions which included the potential for greater susceptibility for disease, queen issues and biochemical anomalies. (Lupi et. al. 2021).

Evidence of Potential Genetic Damage
It is well established that electromagnetic radiation significantly effects living organisms. The effect is so pronounced that some predict the use of EMFs for medical treatments, referred to as electromedicine. (Becker 1990) Unfortunately, not enough health and safety research has been done on the safety of the non-ionizing radiation emitted by our communications technology. This is partly because it has always been believed that the primary danger from non-ionizing radiation is the heating of skin and that EMFs do not have enough energy to alter DNA directly. Additional research has proven this assumption to be false.
One disturbing study found that when honey bees were exposed to a Samsung F400 mobile phone with a carrier frequency range of 900-1900 MHz, the bee stomach cells became damaged after just 10 minutes of exposure, and were completely decayed after 20 minutes. (Mahmoud and Gabarty 2021) Other observations indicating electromagnetic radiation may cause genetic disorders in drone semen (Kumar et. al. 2012) has the potential to further complicate queen issues.
Evidence suggesting that EMFs can alter DNA, and damage or destroy cells, is important because historically such agents have often been shown to cause cancer and birth defects in people. 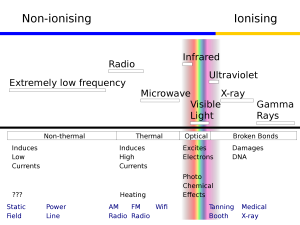 Human Exposure
Mice are often used as a proxy for humans in toxicological research and the study of EMR is no different. In one early study twelve pairs of mice were divided into two groups and repeatedly mated five times while in locations of an antenna park with different power densities ranging between 168 nW/cm2 and 1053 µW/cm2. Researchers found that over the generations there was a progressive decrease in the number of newborns which culminated in irreversible infertility. (Magras and Xenos 1997)
More recently, an American National Toxicology Program study (2016-2018) found a clear link between the near-field RF radiation from cell phones and malignant gliomas of the brain and schwannomas in the heart of rats. (Soffritti & Giuliani 2019) Additional rodent studies further support cancer findings with researchers concluding that there is clear evidence that RF radiation can cause various forms of cancer and should be classified as likely carcinogenic to humans. (Hardell & Carlberg 2019)
The initial potential for carcinogenic risk to humans from non-ionizing radiation exposure came way back in 1979 when a study showed that children exposed to extremely low-frequency electromagnetic fields were at risk of developing leukemia. (Wertheimer & Leeper 1979) Subsequent research led the International Agency for Research on Cancer (IARC) to rate 50/60 Hz EMF as a possible carcinogen and in 2001-2002 the World Health Organization (WHO) classified powerfrequency magnetic fields as possibly carcinogenic for childhood leukemia (Class 2B). By 2011 radiofrequency electromagnetic fields (RF-EMF) were classified as possibly carcinogenic for certain brain tumors (Class 2B) associated with wireless phone use. (WHO/IARC 2011). The Class 2B category includes a variety of substances including lead, car exhaust, dry cleaning chemicals, DDT, and methyl mercury.
Natural forms of electromagnetic radiation are not typically harmful at natural intensities and common exposure rates. Natural background Radio Frequency Electromagnetic fields (RF-EMF) exposure during normal cosmic activities is no more than 0.000001 µW/m2. Current health guideline recommendations for much of Europe is 9,000,000 µW/m2 at 1800 MHz, while in the USA it is 10,000,000 µW/m2. This is much, much more than the natural background exposure rate (Johansson 2019). Current safe exposure rates are based on technical arguments and modeling based calculations that are decades old and focus on a single six to 10 minute acute exposure in an environment free of any other similar radiation for the rest of your life. Real-world exposures are 24/7 with an endless variety of electromagnetic background field and signal exposures. In case you’re wondering, harm from direct or indirect exposure to electromagnetic radiation from our modern-day gadgets are no-longer covered by insurance companies.

No Scientific Proof
It is not clear under what circumstances EMFs will cause damage despite the clear potential for harm. Thus, more research is warranted but, that research needs to be focused and comprehensive. As a recent review of over 450 studies concluded “We recommend that in future studies, effects of EF, MF and EMF in the IF range should be investigated more systematically, i.e., studies should consider various frequencies to identify potential frequency-dependent effects and apply different field strengths…”. (Bodewein, et. al. 2019)
Industries are fond of using doubt and a lack of scientific certainty to counter concerns about health and the environment from the effects of their products and business practices. As we have reviewed in this two-part article, there is quite a bit of proof of potential harm from EMFs to bees and beekeepers. Unfortunately the large well-funded cell phone industry PR machine has successfully buried it, put pressure on journals not to publish damaging studies, and has had their disinformation specialists plant falsehoods that are often repeated by lay people and sincere, well-meaning experts and professionals which sows doubt and confusion. These are all actions we have come to expect from industries that deal with health and safety issues as a political and public relations problem and allow profits to take precedence over science.
Just as big tobacco was able to manipulate studies, capture much of the regulatory and legislative processes to prevent and slow meaningful action, and use public relations and the media to spread misinformation favorable to their bottom line, the pesticide industry, fossil fuel industry and now WiFi/Internet-reliant industries are following the same playbook. Make no mistake, there are huge financial interests working to make sure no clearly negative conclusions are made with regard to the effects of EMFs on people, bees or the environment. Not only is the wireless industry one of the largest and fastest growing industries on earth, but many of today’s biggest and most profitable corporations (e.g. Microsoft, Apple, Amazon, Facebook, Google) and the governments whose economies are heavily reliant on them and the jobs they provide, are counting on society to use more wireless/internet communications technology and not less. The beekeeping industry has even jumped on board with growth in the use of wireless in-hive monitors that track everything from temperature and humidity, to weight and the sounds a colony emits.
Political leaders who rely on corporate donations, regulatory agencies, and the wireless industry will cite studies showing contradictory results and the lack of a scientific consensus as evidence that there is no scientific proof of adverse effects of electromagnetic fields on humans, animals and plants. This is despite the warning of one of the industries own scientists that “The risk of rare neuro-epithelial tumors on the outside of the brain was more than doubled…in cell phone users”; there was an apparent “correlation between brain tumors occurring on the right side of the head and the use of the phone on the right side of the head’: and “the ability of radiation from a phone’s antenna to cause functional genetic damage [was] definitely positive…” (Hertsgaard and Dowie 2018) Again, this situation echoes the experiences of the tobacco, fossil fuel and the pesticide industries all of which were told by their own scientists at one time or another that their products cause severe harm to environmental and human health but chose to cover up and ignore it.
Part of the trouble with trying to get a handle on the EMR issues is that it is not clear at what frequency and intensity EMR will cause harm in a given situation. Poor study designs, low sample sizes, and numerous undocumented variables such as the number of frequencies subjects are exposed to during trials and their intensity; make it easy for policy makers and regulators to dismiss concerns.
Given what we already know about the potential dangers of the other G’s like 2G, 3G, and 4G as well as similar exposures from radio and television towers, smart household devices and power lines, to not proceed with caution before immersing ourselves and the rest of nature in more and more artificial electrical fields such as 5G is irresponsible. 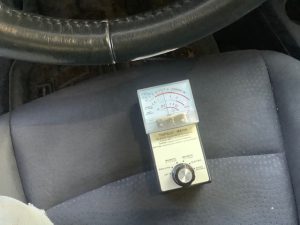 Given what we know about EMR, caution should be taken when transporting bees. While the EMFs given off by this electric car stayed mostly in the low zone, the needle on the TriField meter would ccasionally peg all the way over to the right suggesting that transporting bees over long distances in an electric vehicle may be problematic.

Cautionary approaches
Honey bee scientists are increasingly relying on radio-frequency identification (RFID) tags to track the movement of individual honey bees during studies. They have to be careful however as some researchers have found that honey bee mortality increases when exposed to RFID radiations. It is recommend that bees not be exposed to the EMR from an RFID tag for more than about two hours. (Darney et. al. 2016)
Meanwhile, what can beekeepers do to protect our bees from RF-EMR exposure? While the ubiquitous nature of cell phone transmission towers makes them hard to avoid, beekeepers can at least keep their bee yards away from high voltage power lines.
It would be prudent for us beekeepers to also take precautions to also protect ourselves where possible by limiting cell phone usage and keeping phones as far away from our bodies as reasonably possible. When making or taking a call, make it a habit to hold the phone away from your head and use the speaker phone, or use non-electric headphones or earbuds that plug into the phone (bluetooth systems give off their own EMR). Folks who use their phone as an alarm clock should consider using the airport mode setting to prevent prolonged exposure while they sleep.
An alternative to WiFi is fiber optic cable. A home wired with fiber has faster, more reliable internet with less of an environmental footprint, while eliminating the high frequency radiation exposure associated with cell phone hotspots and WiFi computer access. Just plug your phone in to your home’s fiber network to access information and make calls through the internet. Also consider limiting your purchases of “smart” devices, or at least reduce their use as much as possible. Finally, be wary of WiFi and EMF shielding products that claim to protect you from radiation. I have tested some with my TriField meter and they do not always work.

Ross Conrad is the author of Natural Beekeeping: Organic Approaches to Modern Apicuture, 2nd Edition and co-author of The Land of Milk and Honey: A history of beekeeping in Vermont. Ross will be teaching an organic beekeeping for beginners class on Saturday and Sunday May 7-8th in Lincoln, Vermont and an advanced beekeeping class on Saturday May 21st in Middlebury, Vermont. For more information email dancingbhoney@gmail.com or call 802-349-4279.