The potential for harmful impacts from electromagnetic radiation to bees first came into the general public’s consciousness shortly after the emergence of Colony Collapse Disorder (CCD). It was the result of reports of a study in which cordless telephone base stations that emitted 1900-MHz electromagnetic field (EMF) radiation were set in hives and found to decrease comb building and increase the duration of foraging trips. (Kimmel et. al. 2007) The study was poorly designed, had a small sample size, and there was the small issue that beekeepers do not typically place mobile phone base stations used by cordless landline phones in their hives. As a result the idea of electromagnetic radiation harming bees was quickly discredited and became the subject of jokes and ridicule. I certainly wrote it off as inconsequential. This was an unfortunate situation because I have since found that when you look at the studies on the subject with an independent mind, there just happens to be enough peer reviewed research to suggest that there may in fact be cause for concern. The collective evidence drawn from scientific studies of the adverse health and biological impacts of artificial electrical field exposure from sources such as cell phone towers, cell phones, smart meters, power lines and WiFi routers may be jeopardizing the health of our bees and more.

What is EMF and EMR?
An electromagnetic field (EMF) is produced when electric and magnetic charges radiate energy (aka radiation). Electromagnetic radiation (EMR) is a kind of energy that includes radio waves and visible light. Even solar wind generated from the sun creates an electromagnetic field as it hits the earth which means that all life on earth is in the presence of electromagnetic fields. EMF radiation in wireless communication only works because the transmission is more powerful than the natural background radiation. These man-made sources of electromagnetic radiation greatly increase normal background exposure. Common sense suggests that biologically based scientifically sound public exposure standards be developed to protect the health and well-being of people, bees and other wildlife. Unfortunately, such standards do not exist for pollinators and wildlife, and studies suggest that even the human standards that exist are outdated and inadequate.
Electromagnetic radiation is measured in hertz (Hz) which represents the cycles per second of the wavelength. One hertz represents a single time that a analog sound wave or digital pulse repeats each second (e.g. one cycle per second). Kilohertz (kHz) measures thousands of cycles per second, Megahertz (MHz) refers to millions and Gigahertz billions of cycles per second. It is well established that EMR has the ability to seriously impact living organisms and that EMR of 900 MHz is highly bioactive causing significant changes in the physiological function of living organisms. (Aday 1975)
Radiofrequency electromagnetic fields (RF-EMF) are emitted from the wireless communication devices we use daily: radios and televisions, satellite communication systems, WiFi systems and wireless mobile phones and cell phones. RF-EMFs emit non-ionizing radiation. This differs from ionizing radiation of nuclear power plants in that while non-ionizing radiation has enough energy to excite the electrons in molecules and atoms (moving the electrons to a higher energy state) they do not knock electrons out of their orbits around atoms like ionizing radiation does.
The agency responsible for regulating the wireless communications industry is the Federal Communications Commission (FCC). Unfortunately, FCC radiofrequency (RF) safety guidelines have not been updated since their implementation in 1996. This is significant since these fields are about to get significantly stronger with the current roll-out of the fifth generation technology standard (aka 5G) for broadband cellular networks. Today no-one, including the Federal Communications Commission (FCC) knows whether 5G is safe or not. Even wireless carriers have to admit that they are not aware of any independent studies on 5G safety. When asked during Senate hearings what research has been done on the safety of 5G technology, the answer was “none”. (Blumenthal 2019)
Meanwhile, the public is consistently told that there is no need for anything to worry about concerning the rollout of this new technology that the FCC is pushing and if current plans come to fruition has the potential to result in over 800,000 new antenna installations throughout the U.S. providing fast 5G internet service to many Americans by the end of the decade. 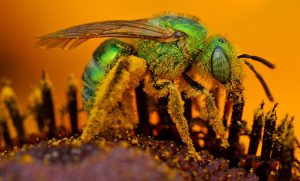 Honey bees and wild pollinators like this sweat bee pictured, are among the many insects that can be negatively affected by man-made sources of electromagnetic radiation.

Effects on insects
There is a growing body of evidence of harm from wireless non-ionizing radiation such as from cell phones, cell towers, WiFi, and smart meters can harm insects. A 2013 review of 113 studies that found that 70 percent of papers analyzed reported a significant impact of RF-EMF on birds and insects. This suggests an urgent need for more research and repetitions of studies given the fast pace of cellular telephone technological progress. (Cucurachi et. al. 2013)
Lab studies on insects show negative effects of EMR on reproductive success, development, and navigation abilities. However, the impact of widespread mobile telecommunication antennas on wild pollinator communities in field-realistic conditions is still largely unknown. In one trial, beetle, wasp and hoverfly abundance decreased with EMR, while the abundance of underground-nesting bees and bee flies increased with EMR. This cries out for additional research to understand the ecological impacts of EMR on wild pollinators and the subsequent effects on plant diversity, crop production, as well as human welfare. (Lázaro et. al. 2016)
In 2012 Sivani and Sudarsanam published a paper that states: “Based on current available literature, it is justified to conclude that RF-EMF radiation exposure can change neurotransmitter functions, blood-brain barrier, morphology, electrophysiology, cellular metabolism, calcium efflux, and gene and protein expression in certain types of cells even at lower intensities. The biological consequences of such changes remain unclear.” The authors further noted that short-term studies on frogs, honey bees, birds, bats and even humans are scarce and long-term studies are non-existent.
A review of the literature published just this past year came to the conclusion that there is sufficient evidence to support claims of damage caused by electromagnetic radiation. The study’s author goes on to state that “…electromagnetic radiation should be considered seriously as a complementary driver for the dramatic decline in insects, acting in synergy with agricultural intensification, pesticides, invasive species and climate change. The extent that anthropogenic electromagnetic radiation represents a significant threat to insect pollinators is unresolved and plausible.” (Balmori 2021)
Up until recently, the range of frequencies used for wireless communication has not risen above 6 GHz (2G, 3G, 4G, and WiFi). The impending deployment of the new and highly anticipated 5G technology utilizes a signal of 120 GHz. Research on insects showed that as the power density of frequencies above 6 GHz increased, the power absorbed by the invertebrates studied increased from three to 370 percent (Thielens et. al. 2018) making the importance of being able to understand the potential threat to pollinators from electromagnetic radiation all the more urgent.

Worker Bee Exposure
While lots of research documents the impacts of EMF on insects generally, some studies have looked at the impacts of electromagnetic radiation on honey bees and the majority of the papers have found potential cause for concern when honey bees are exposed to EMFs. Such exposure has been shown to cause significant cognitive impairment and behavioral changes. These include reduced locomotion activity, impaired homing and orientation abilities, fewer foraging flights and short-term memory loss. (Harst et. al. 2006; Warnke 2007; Kimmel et. al. 2007; Sharma and Kurmar 2010; Shepherd et. al. 2018; Lopatina et. al. 2019; Shepherd et. al. 2019) Many of these studies, and others, document increased aggression when bees are exposed to EMR. (Mixson et. al. 2009; Halabi et. al. 2014).
Meanwhile, in 2017 researchers found that DNA damage in honey bee larvae increased significantly when exposed to modulating EMR fields. Exposure levels during the trial were much higher than what honey bees in nature could reasonably be expected to encounter but the results suggest the need for further intensive research on all stages of honey bee development. (Vilić et. al. 2017) 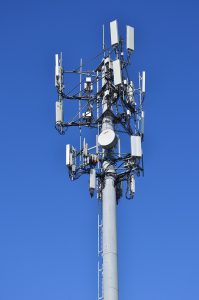 Cell phones and the towers use to transmit their signals are just one of many sources of man-made electromagnetic radiation.

Cell Phone Towers
Cell phone towers have been a focus of additional research, but unfortunately the few studies that have looked at the effect from cell phone towers suffer from small sample sizes.
Some studies have concluded that the effect of cell tower electromagnetic radiation on colonies placed directly under cell-phone towers is insignificant. (Mall and Kumar 2014, Patel and Mall 2019) However, these researchers placed colonies under the transmission antennae at the base of the tower where the radiation broadcast angle approaches zero degrees resulting in little-to-no radiation exposure.
One of the more realistic studies that looked at the impact of electromagnetic radiation (EMR) on hives exposed to cell phone tower emissions was done on the Eastern honey bee Apis cerana. (Taye 2017) Foraging behavior was observed in colonies placed at distances of 100 meters, 200m, 300m, 500m, and 1000m from a cell phone tower. Researchers documented significantly reduced colony foraging activity in the hives closest to the radiation source. Clearly more research is needed on impacts of cell towers before firm conclusions can be drawn on exactly how and under what circumstances cell phone towers may be harmful to bees and other pollinators.
Next month in part two of this article, we will look at the effects of RF-EMR on queens and share some ideas on what we as beekeepers might do to help reduce exposure to our bees and ourselves.