Native to North and South America, huckleberries (Gaylussacia spp.) are most common in the East. Around eight species are found to the U.S. Typically suitable for zones four through nine, they’re somewhat hardier than blueberries.

Sometimes, these have been called farkleberry. The word huckleberry comes from an English word for blueberry, ‘hurtleberry’, which was first used in America by John Lawson, author of “An Account of the Carolinas.”

Similar to blueberry bushes, huckleberries are relatives of cranberries and blueberries. A related group of huckleberries (Vaccinium spp.) that are most common in the West was profiled in an earlier article.

Huckleberries grow in the same regions as blueberries. They’re especially plentiful in the Southeast.

Their typical habitats are hills – especially rocky ones, quaking bogs, wooded areas, swamps, sandy pinelands, barren, rocky pastures, and dry woods. The plants grow in a variety of soils from pure sand and rich soils to rocky ones.

Depending on the species, they can be deciduous or evergreen. The alternate leaves, about four inches long, range from lance-like to elliptic. With the exception of the box huckleberry, most feature sticky dots that aren’t always visible to the naked eye. The resinous leaved species provide beautiful Fall color.

These contain a five lobed, tubular calyx with 10 stamens. The urn or bell-shaped corolla, which can be white, red, or pink, features five shallow lobes that often bend backwards.

The round, shiny, firm fruits, nearly an inch long, are berry-like drupes. They’re typically black or blue, but are rarely white. Ripening during late Summer, these fruits are generally tasty. Huckleberries contain ten, hard, nutty seeds, while blueberry seeds are soft. The skins are thicker than those of blueberries.

Little is apparently known about the pollination needs of black huckleberry and dwarf huckleberry. But, they’re apparently similar to that of blueberry plants.

These shrubs yield both nectar and pollen. The nectar arises at the bottom of the corolla. Bees find the flowers to be very attractive.

Huckleberries generally bloom from February to May, depending on location and the species. At least seven species are important nectar plants. These are particularly good honey plants in the South and Northeast.

They can yield a small surplus crop of honey. In the South, the first crop of honey is generally from huckleberries.

Sometimes, the honey is pink tinged with a fruit-like taste. At times, it can be thin bodied with a strong, characteristic flavor.

Generally, these are considered less ornamental than blueberries with the exception being the box huckleberry. The plants can be grown wherever blueberries are cultivated. Sometimes, these don’t transplant well. Huckleberries are suited to sun or part shade.

The plants prefer a rich, acid soil, particularly a peaty one. They’re relatively easy to grow from seed and cuttings. The bushes can also be divided in the Spring before growth begins.

All huckleberries contain valuable anthocyanins. Depending on the species and location, these ripen from June through August. Thoreau found them to be very tasty and equally good as serviceberries. They were once an important food for Native Americans.

The fruits can be substituted in any recipe calling for blueberries. For pies, most bakers cook huckleberries before adding them to the pie crust. The berries can be frozen, canned, or dried. A wonderful huckleberry cake recipe appears in “The Encyclopedia of Country Living” by Carla Emery.

The following species of huckleberries are known to be good bee plants. 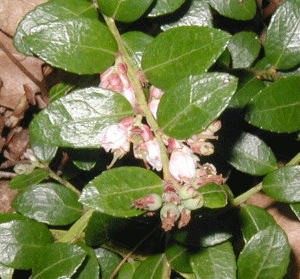 Suited for zones five through seven, this evergreen occurs in the Carolinas, Tennessee, Kentucky, West Virginia, Virginia, Pennsylvania, and Delaware. Fairly rare within its range, it is considered to be at risk. Box huckleberry grows on slopes, hills, sandy hammocks and in sandy woods.

The plant prefers sites with partial shade although it tolerates some sun.

The stems, which are only ½ to 1½ feet in height, form a carpet-like mat of green. Box huckleberry seems to spread indefinitely with an extremely slow growth rate of about six inches per year.

A plant located in Perry County, Pennsylvania in the Amity-Hall area covers 100 to 300 acres. It has been estimated to be around 12,000 to 13,000 years old. Genetic tests have shown this is in fact a single plant and not a colony. This particular plant is believed to have survived the last Ice Age because it was growing in a protected location. The first published report about it appeared around 1949.

A very leafy plant, box huckleberry bears creeping, angled stems that turn up at the tips. These lack the resinous dots found on most other huckleberries. Sometimes, the twigs can be quite hairy.

Box huckleberry is very suitable for rock gardens and as a ground cover.

It is considered to be among the most beautiful of the group mainly due to the lovely foliage that sometimes turns rich bronze in the Fall. The thick, elliptic to oval, deep green, leathery, toothed leaves are 1½ inches long.

The bell-like blooms, only ¼ inch in length, appear from April to May on crowded, short racemes with two to six flowers per stem. The corollas, which can be white, pink, or flesh colored, sometimes have red streaks. The scaly bracts are deciduous. The blue fruits ripen from June to August, according to location.

Also known as common huckleberry, this drought resistant species is the most widespread huckleberry. Suitable for zones four through nine, its habitats include rocky woodlands, sand scrub, clearings, thickets, bogs, upland woods, rocky balds, sandy barrens, and both dry and moist woods. Found in the entire eastern region with the exceptions of Florida and Louisiana, Its range also extends into Minnesota, Arkansas, and Mississippi. 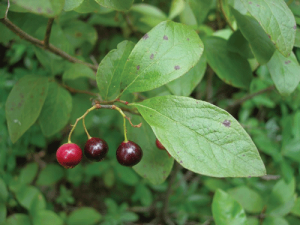 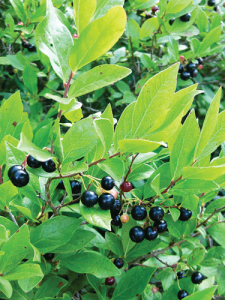 Resembling dangleberry, this stiff, dense, aromatic, upright, much branched shrub is usually three feet or less in height and equally wide. Its young growth is especially sticky due to the resinous dots. The young stems can be slightly hairy.

The greenish-yellow foliage with small, short, abrupt tips reaches three inches in length. The leaf shape varies from oval to oblong. Both surfaces are covered with sticky dots that make the foliage feel clammy. The leaves provide stunning Fall color.

The clammy blossoms emerge from April through July on one-sided, short, drooping clusters. These flowers feature reddish bracts. The corollas, ½ inch in length, can be reddish-orange, green, or red.

The shiny fruits, ½ inch long, ripen from July to October, depending on location. Mostly blue-black but occasionally white, these are sometimes covered with a blue bloom. This particular species consistently yields a good crop of honey in some areas.

Black huckleberries are the most popular species when it comes harvest time. The fruits were consumed fresh and dried by various Native American tribes, including the Iroquois, Chickasaws, and Cherokee. 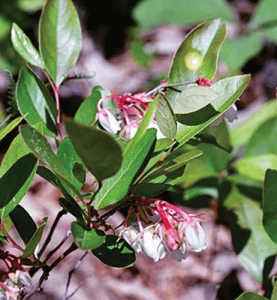 This attractive native is also known as blue tangle, dwarf huckleberry, and blue huckleberry. Recommended for zones five through nine, the species occurs throughout the Southeast from Mississippi northward into Tennessee, Kentucky, West Virginia, Virginia, and along the Atlantic region to New York, New Hampshire, Massachusetts, Connecticut, and Rhode Island. Its habitats include swamps, thickets, sandy hammocks, scrub, pinelands, clearings, and dry woods.

The plant is most common in coastal regions. Several varieties are found in some areas. Requiring a moist to wet soil, dangleberries prefer light shade to sun.

This slender, branched, rounded shrub with a spreading growth habit can be somewhat taller than most huckleberries. Usually three feet in height with a slightly wider spread, dangleberry sometimes reaches six feet in height. The young stems can be hairy.

The bell-like blooms open on lax, slender, nodding, leafy, bracted, axillary racemes containing five to 10 flowers. The Latin species name refers to the racemes. The greenish or purplish-green blossoms are ½ inch in length.

The flowers feature small, somewhat persistent bracts, five calyces and stamens. The color of the five-lobed corolla varies from pink or purplish-green to whitish-green.

The glossy, dangling, juicy, sweet, edible fruits are ½ inch in diameter. With a whitish bloom, these are so deep blue they’re almost black. Considered excellent quality, these have a spicy flavor. They ripen from July through September. 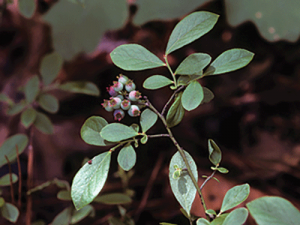 Also known as bush huckleberry and gopher-berry, this is most suitable for zones five through seven. Its range extends throughout the Southeast northward into Virginia, Delaware, Pennsylvania, New Jersey, New York, Connecticut, and Maine.  Dwarf huckleberry is most common in coastal regions.

Considered a threatened species in some areas, this low growing, suckering, slightly aromatic shrub is usually one to two feet in height. The creeping, hairy, slender branches arise from underground stems. The twigs are typically hairy or sticky.

The shiny foliage can be semi-evergreen to deciduous. Sometimes toothed, the alternate leaves, which end with a small, short abrupt tip, are usually stalkless. The leaf shape can vary somewhat from oblong to lance-like.

The foliage can reach two inches in length. The undersides of the leaves are hairy and dotted with resinous glands. Some varieties feature hairy glands on both surfaces.

Dwarf hackberry blooms from March to June. The blossoms are slightly larger than those of most other huckleberry species. They appear on downy, loose, very long, leafy, terminal clusters that contain five to 10 flowers.

With many leafy, persistent bracts, the blossoms are less than ½ inch across and either pink or white. The five-parted, bell-like corollas are pink, red, or white.

The black, hairy, globose fruits ripen from June to October, depending on location. While they usually have a pleasing flavor, these are sometimes rather insipid.

The following species aren’t nearly as widespread as the others. These generally occur in parts of the Southeast.

Bear huckleberry (Gaylussacia ursina) is native to Tennessee, North Carolina, South Carolina, and Georgia. Resembling black huckleberry, this graceful, deciduous shrub reaches six feet or more in height. The twigs and undersides of the foliage are hairy. Sometimes red-tinged, the blossoms appear in May and June. This bears glossy, black fruits.

Hairy twig or Dangleberry (Gaylussacia tomentosa) is native from Alabama to Florida into North Carolina mostly in coastal regions. The Latin species name describes the hairy twigs. The yellow dotted leaves are hairy beneath. The plant bears greenish blossoms and edible blue fruits.

Woolly huckleberry (Gaylussacia mosieri) occurs from Louisiana to Florida northward into South Carolina mostly in acid bogs, and along streams and other wet places. The plant is named for the very hairy fruits. The blossoms contain five yellow petals and five sepals.

Connie Krochmal writes about plants from her home in Kentucky.