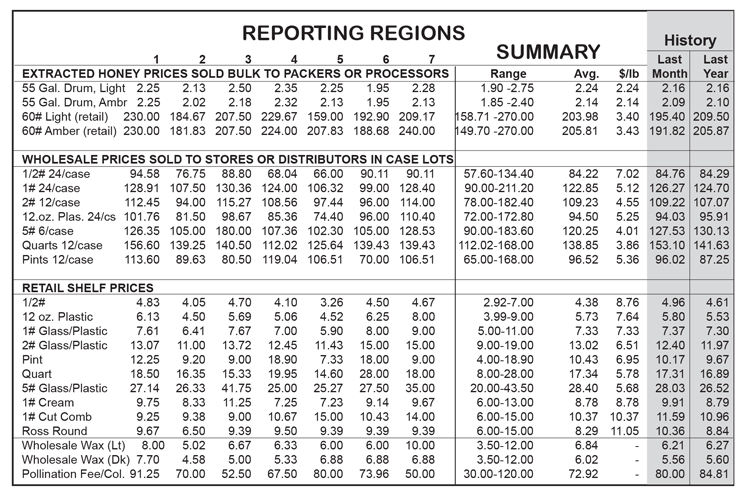 This is where we stick our neck way out and try and see what the future holds in terms of how much honey will the U.S. produce in 2017. And this year it is way, way out.

Here’s what we did. We had our reporters in each region tell us what percent of their colonies this year they harvested honey from. Assuming they started with the same number of colonies they had counted last year, we calculated how many honey producing colonies produced honey in a region this year. 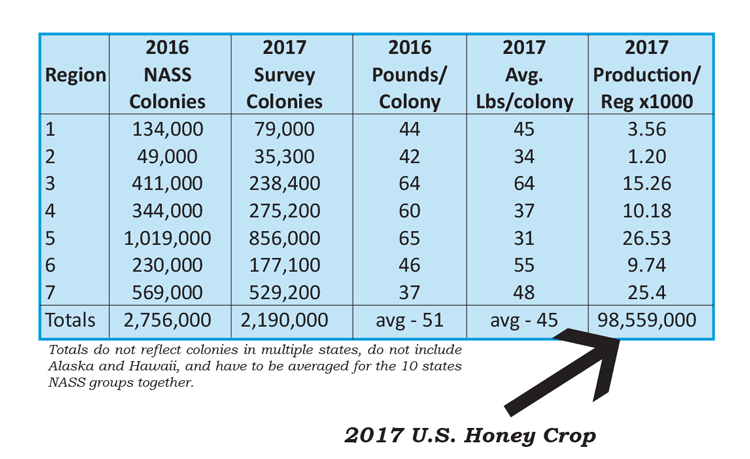 Then we calculated the average production per colony as reported, and multiplied that times the number of colonies in a region to get total honey production for that region.

In 2017, by our calculation, there were 2.19 million colonies used to produce honey, producing on average 45 pounds of honey each, for a total US production of 98.6 million pounds.

These numbers reflect the slow evolution of the beekeeping industry in the US that we have been eluding to for several years now. Continued imports of low cost honey is difficult to compete with, certainly, with between 70 – 80% of honey consumed in the US from off shore.  The drought, and now fires, in several usually productive regions of the country certainly reduced colony and thus regional yield, plus the increased market for bees for pollination and for beginner packages and nucs takes some colonies out of the honey show, and increased management actions to keep bees alive for next season’s pollination contracts all preclude a focus on producing honey. This year, it shows even stronger.

The quarterly and annual honey and colony report distributed by USDA NASS will be in our May issue. We’ll see how we’ve done.