Don Coats, DVM (retired) began beekeeping during his last years as a dog and cat doctor. 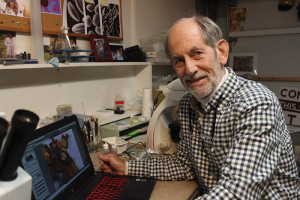 What started as a hobby and passion, has now  evolved to doing research on clinical aspects of the honey bee. His enchantment for bees foraging in meadows now includes charting a path to keep honey bees healthy and flourishing with all pollinators on native blooms as a public advocate for native bees and native plants.

Don, an Illinois native, a graduate from the University of Illinois with a degree in veterinary medicine (1966), following a Bachelor’s degree in from Southern Illinois University. After a year in small animal practice in Springfield Illinois, the lure of research brought him to Wilmington, DE as research scientist in animal medicine at Atlas Chemical Industries, now known as Astra Zenaca. Disenchanted after one year with that role, he returned to small animal veterinary practice with Dr. William Butler, at Centreville Veterinary Hospital in Wilmington, DE.

After nearly a half century committed to healing pets and being a comfort to pet owners, retirement called for a change of focus to fill a motivational void.  Beekeeping fulfilled Don’s devotion to science and natural history. He has found a niche conducting part-time disease research on his own 20 hives and engaging 12 local beekeeper clients in northern DE/southern PA in studies on preferred management services.

A hobbyist beekeeper for over 15 years, he followed his early training seeking to approach beekeeping management issues from a clinician’s perspective, now as a citizen scientist.  It has been a natural progression from a caring vet to citizen scientist as he now seeks to engage   beekeepers and other bee scientists in bee health improvement.

One of his concerns is understanding and analyzing the reasoning behind beekeeper management practices, including  prophylactic use of antibiotics. As a vet he did not prescribe antibiotics for small animals without first seeking to make a proper diagnosis.   He’s been disappointed in witnessing beekeepers electing to use antibiotics based on nonspecific signs and insufficient diagnostic evidence. Likewise, he perceives some practices in Winter hive care to be based on tradition, rather than principles of biology or tested evidence.

Don relates that the person he learned his beekeeping from had been using terramycin to medicate his bees without a history of having had disease. When Don questioned prophylactic use, his mentor said that as far as he knew ‘everyone’ did it and it was better to be ‘safe than sorry.’ Such traditions die hard. Recent changes in availability of antibiotics is an improvement, Don feels, toward more rational disease prevention and detection.

One means of addressing his concerns and what he considers a highlight in his second career is offering training in pathogen identification and assessment by conducting microscope workshops for beekeepers at local, state and additionally at the regional EAS conference.  Sharing the delights of discovery in real time with other beekeepers, old and new, is akin to advising a client on new puppy health care according to Don. 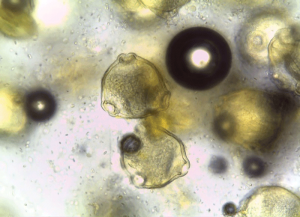 Don offered a full day of microscope use at the 2016 EAS conference in Stockton University in NJ. Included in the course were mites, nosema and pollen ID along with bee organ tissue mounting and other histopathic preparations, assessing nectary potential of blooms and finally fecal smears from bees. Don will again be offering a microscopic short course at the 2017 EAS Short Course at the University of Delaware. The 60th EAS Conference will be July 31-Aug 1 at the University of Delaware, Clayton Conference Center, Newark, DE.

The 2017 workshop will be designed to cover three categories; (1) pollen identification and collection protocol, (2) honey bee anatomy/dissection of the abdomen, and (3) Nosema assessments.  Questions and discussions among the students generate a learning experience for students and instructor alike, Don finds.  In addition to this effort at EAS, Don also conducts small workshops in his home laboratory, as well as an advanced forum type event in conjunction with larger meeting events such as state beekeepers conferences.

Don feels that the microscopic analysis of type of pollen in honey to be on some beekeeper’s ‘bucket list’ of deepening interest and understanding of their honey bees. Such interest ranges from “what sources have my bees been visiting” to an aesthetic appeal, or even a deeper understanding, of “plant behavior”.  Confirming the source of a honey to the consumer often can lead to a fascinating dialogue. Actually observing those jeweled beads under the microscope generates a wonderful “Ah Ha” response.

There is a more practical aspect as well as recent seizures of honey can attest (on August 12 around 42 tons of illegally imported Chinese honey was confiscated in Miami, the third such significant seizure of honey in four months). The most recent seizure, honey transshipped from Taiwan to the U.S., was confirmed as originating not in Taiwan but rather in China because of the characteristic pollens and antibiotic “footprint” used in its production. See https://www.beeculture.com/catch-buzz-bee-not-bee-cbp-partners-seized-132-drums-honey

Beekeepers using microscope can track pollen sources through seasonal changes. Trying to relate protein nutritional value to bloom type is a challenging and practical subject that Dr. Debbie Delaney and graduate students at U of Delaware have been working on for several years.  This work, Don’s contribution, and those of Dr Peter Lindtner, whose book Garden Plants for Honey Bees is a popular resource for identification of pollen grains and flowers, will also be featured at EAS 2017.

Don is able to extract samples of pollen from honey using a Millipore filter devise, originally used to diagnose heart worm disease in dogs.  Don and others consider it possible to catalogue protein content in pollen. Pollen is the bee food that builds strong bee babies.

Note: during the 2017 EAS meeting Peter Lindtner will offer field trips to flowers, at both Mt Cuba, a 500 acre natural preserve in Northern Delaware (www.mtcubacenter.org), and at the Nemours Gardens, a 300 acre DuPont estate in Wilmington, cited as the largest classical French Garden in North America http://www.nemoursmansion.org/. The Nemours Mansion is a highly regarded tourist visit in the Delaware Valley. 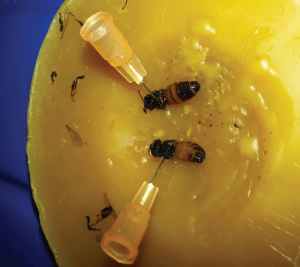 Don’s studies on Nosema are motivated by his clinical assessment that suggests that the organism is not as damaging to bee colonies as has been historically perceived. Don wonders if beekeepers are misinterpreting priorities of concern. Peaks in spore counts appear to run their course seasonally. High concentrations of Nosema appear in strong, robust hives as well as in weak colonies.  Don thinks it is appropriate that the haphazard, often calendar-based medication treatment with fumagillin for this organism is falling out of favor in the US, as it has in other countries.

In order to study Nosema in more detail, Don has conducted a controlled inoculation of Nosema to nucs confined in netted chambers. Bee forage plants installed in the netted tent provided a feeding station but had to be removed before the end of the trial. Efforts to inoculate nuc colonies with 300 million spores were not successful. Methods to insure reliable test colonies will be continued.

Learning from other beekeepers and conservationists…

Leveraging bee club efforts with efforts of other local and regional conservation organizations toward forage enhancement  by creating wildflower meadows and replacing monoculture grass lawns can have many benefits. Don has started a small nature study group called Delaware BeeWatchers. Using the protocol developed by Master Gardeners and Xerces Society, they have been counting native and honey bees in different kinds of habitat.

The citizen science goal is to demonstrate the practical and aesthetic values of meadows and promote an appreciation for the fascinating world of native bees.  Populations of native bees, (overlooked as subject material for backyard nature study), multiply rapidly when native plants are available.  This forage, of course, is shared with honey bees and could be expanded massively in suburbia and the neglected perimeters of agricultural fields.

DE BeeWatchers are making a special effort to share information and devotion to native bees and meadows with the public. Recently this group set up an informational booth at Winterthur Gardens, another DuPont family estate with a fabulous garden and Americana collection. EAS 2017 registrants will have the opportunity to visit this estate during the July 31-Aug 4 Annual EAS Short Course and Conference. It is a mere 10 miles from Newark.

Don is encouraged that the hobbyist honey bee community is making the effort to learn about nature bees and other pollinators beyond honey bees. He feels working with and setting goals that can be shared with other organizations can be as rewarding as honey harvest or candle making.  And working in conjunction with others helps advance the mutually shared goals more rapidly and reach out to groups that might not be approached.

Don, like many beekeepers is retired, but he is continuing to work at understanding and keeping bees more intensely than when he was a full-time practicing Vet. He hopes to give back to beekeepers some of his love of bees and knowledge of pollen and bee pathogens, via his microscope workshops and engagement of the local bee community, in citizen-science based projects and better understanding of what healthy means in the bee colony and beekeeping community.

By: Howard Scott Make more money. Work less. In the market shelf these days, I see more and more cremed and crystallized honey. There…