The bee program here is only one of many we have.

If you are like me, I rarely drive by Lee Correctional Institution on Wisacky Highway without glancing over and wondering what it must be like inside.

It can’t be good. Life for inmates inside a maximum security prison is fraught with challenges and dangers and hard to imagine for those on the outside.

The state’s largest maximum security prison, located here in Lee County, gets plenty of bad press and that is why I was a little nervous when Bill Hemby, a local beekeeper, contacted me and suggested I do a story on the beekeeping program going on inside the walls of Lee Correctional.

When you arrive at the prison, you hand over your car keys and license at check-in. You also take off any belts, jewelry and your shoes. You’re patted down and they check the soles of your feet.

That did little to put me more at ease but the correctional officer was friendly and two ladies in front of me were bringing in dozens of cupcakes to share with inmates. I began to feel a little better about my visit. 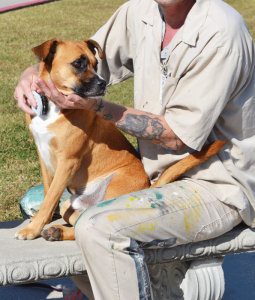 Then I met Clark Newsom, Internal Communications Director for the SC Department of Corrections, and Jimmy Sligh, programs manager at LCI. They escorted me deeper into the prison, through several locked and guarded gates, until we emerged into a yard where there were inmates – walking dogs! In the yard, underneath a small shade tree, was a cat and several kittens stretched out enjoying the sunshine. It sure didn’t look like I was in the yard of a maximum security prison.

Inmates with dogs on leashes were going about their daily routine with well-behaved dogs in tow. One inmate sat on a bench brushing his dog, who had just received a bath.

Sligh told me the Healing Species Prison Program pairs rescued dogs and prison inmates together for second chances in life. The dogs, which frequently have been abused and are considered “unadoptable,” live with their inmate handlers, receiving unlimited attention and affection. More than 35 dogs have been socialized by LCI inmates and found homes.

The canines are not, of course, the only ones benefiting from the program. An inmate named Ramsey said caring for his dog has taught him responsibility for something other than himself. “It helps me spend my time in here in a positive way,” he said.

I learn it is just one of many beneficial programs offered through the Better Living Incentive Community, a program created in 2012 by Michael McCall, deputy director of the South Carolina Department of Correction, with the vision of “changing the prison culture from one that fosters and encourages self-destructive behavior patterns to one that addresses and corrects the criminality and self-destructive mentality through peer-to-peer accountability.”

BLIC residents (they don’t call themselves “inmates”) are selected based on good behavior and housed in a separate dorm.

Each BLIC resident agrees to abide by the rules set forth in the program’s “contract.” Much of it hinges on respect, for oneself and others.

“You can tell a difference in the people who are in the BLIC program and the ones who are not,” says Hemby, who has been volunteering his time for the past several months. 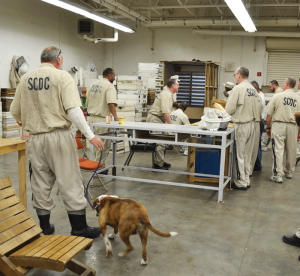 The bee program is one of many BLIC activities. Mack Flake, a volunteer who is now deceased, really got the bee program off the ground at Lee Correctional, says inmate and BLIC resident Chris, who heads up the program. “Everyone who wants to be part of this program has to go through a beginner’s class then pass a test to start coming out here in the beeyard,” he says. “I got involved with bees in 2010 and just fell in love with it. The idea of going out there and looking in the box and there was a handful of bees then within a month you got a whole box full of bees – I had to know how that happened. You learn a lot of life lessons working with bees.”

Sixteen of the BLIC residents in the program recently passed the test to become certified beekeepers.

This Summer they “pulled their first honey,” 228 pounds of it, and the day I visited they were getting the hives ready for Winter.

Hemby said what the inmates have done is impressive. “Up until I got here, everything these guys were learning they were doing on their own,” he said. “They paid for their own books and any equipment they could afford. I’ve been able to get some books from the Wateree Beekeepers so there is some consistency in what they’re learning but this is not a state funded program so everything they use has been donated or the inmates have paid for it themselves. These guys have just done an amazing job. They work so hard and are so dedicated.” 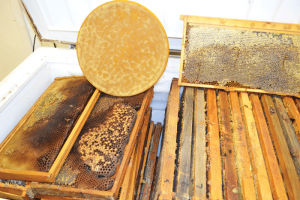 The honey is sold to the LCI staff to fund the bee program.

Russell said working with the bees is worth the 30 stings he received one day because there is not enough protective clothing to go around.

“I didn’t even feel most of them,” he said. “I just love working the hives and plan to continue when I get out.”

He, the other inmates I talk to, and prison officials all praise the volunteers who come to the prison to share their time and talents. “We have a lot of volunteers, not just at Lee but all over the state,” Newsom said. “We couldn’t have these programs without them.”

And the programs are transforming the lives of the men who are serving their time in the state’s prison system.

Chris says he will use the knowledge he has gained when he is released. “I have a daughter and grandkids,” he said. “I’m trying to set an example, even in here. Just because we’re behind this fence doesn’t mean we’re all bad people. A lot of us are people who made a mistake and we’re trying to spend our time in here becoming better people.”

In a nearby shop building, inmates are building frames and hives for their bees.

Kermit, another inmate, has been working with bees since the program began. “I love working with stock and animals,” he said. “Without the bees, we’re going to lose the earth and if I can do something to help, I’m going to. It’s part of my religion and I love coming to the shop and working on the equipment. It helps pass the time, too.”

Akbar said he wants to make a contribution to society. “I have sons who have a lot of spare time and when I get out, I want to share what I’ve learned with them working with the bees,” he said. “This is something productive and positive and I’d love to see more people in here get involved.”

There are 384 of the prison’s 1,375 inmates in the BLIC program, one that should be in every prison in the country.

In the BLIC dorm, “residents” leave their cell doors open and their lockers unlocked. They don’t have to worry about anyone stealing from them.

There are book shelves on the walls, there is a microwave, a TV, showers with curtains and a table set up where a puzzle is being put together. Everyone speaks softly and is polite.

There are talented men here. Garry is an incredible artist who discovered his talent when he was sent to prison. His murals decorate the walls and he hopes to somehow sell his art to fund a charity he wants to establish. He teaches art to the other inmates.

Leif is a master electrician and has created an amazing electrical wizardry board of gizmos from scrap parts. He uses that to teach other inmates so they will have skills when they leave LCI. The prison is getting ready to begin a cooking program that will be taught by a local chef.

In another room, there are several men playing guitars and a keyboard, practicing for an upcoming concert. They teach others how to play musical instruments.

All of the classes in BLIC are taught by inmates themselves. And there are more than four dozen offerings, everything from beekeeping to philosophy to Russian to woodworking.

Every 90 days every BLIC resident undergoes peer-to-peer review to see if he is meeting the community’s expectations.

“It makes us stay accountable to the community,” Chris explains. “We’re allowed certain freedoms and we’re responsible for behaving like free men. It’s an opportunity we’re grateful for and don’t take lightly.”

Cecilia Reynolds is the warden at LCI.