Using Infrared Spectroscopy. It’s as easy as A, Bee, C.

While many people are aware of the threat of accidental contamination in the food supply chain it is only in recent years that the intentional adulteration of foods for economic gain has come to light. This was highlighted by the 2007/08 melamine crisis in China where the increasing number of renal failures in dogs and cats alerted the authorities to a problem in the pet food supply chain. We now know this was due to a mixture of melamine and cyanuric acid, which was found inside the pet food.1

The story is however not new, with fraud and adulteration reported as far back as ancient Roman times with wine reportedly adulterated with water. In recent years, the problem has been exacerbated by globalization of supply chains increasing complexity and decreasing visibility to the multiple members in the chain.

So how does food fraud impact Honey? The most common types of honey fraud are:

Addition of corn or rice syrup

Like other food fraud types, these are also not a new case. In 1889 Dr. Harvey W. Wiley, the first chief chemist of the U.S. Department of Agriculture, said honey was the most adulterated product in the country. In testimony before the U.S. Congress on behalf of what became the Pure Food and Drug Act, Wiley brought along a bottle of adulterated honey, complete with a dead bee on top of the viscous liquid. The bee, he explained, was meant to dupe buyers into thinking the honey was 100% pure. Instead, Wiley testified, the sugary liquid masked a number of harmful ingredients to consumers2.  While the situation has improved over the past century there are still problems. With a 2011 headline stating, “more than three-fourths of the honey sold in U.S. grocery stores isn’t exactly what the bees produce.” 3 As such in recent years a lot of focus has been placed on identifying if high fructose corn syrup is being added to honey and if high value honeys, such as Manuka, are pure and truly authentic.

To detect these types of fraud, chromatography and mass spectrometry are effective at detecting adulterants. However, Infrared and Near Infrared technologies are easier to operate, easier-to-use, quicker and are less expensive, making them an ideal solution for honey producers. To allow these technologies to be utilized, chemometrics, that is extracting information from chemical systems by data-driven means, must be employed facilitating the simplification of complex spectral fingerprints to either be grouped into certain honey types or have calibration models generated to identify levels of adulterants. To show near infrared spectroscopy’s ability to detect syrup adulteration into various honey types, NIR Spectra of the following pure samples were measured4:

Ten replicate spectra were measured for each of these pure materials. In addition, dilutions of the pure material using corn syrup were prepared yielding the following concentrations:

Figure 1 contains the scans of three different samples with varying concentrations of honey (0% honey is Cory Syrup). There are clear spectral differences between the samples at these high concentrations. With obvious absorption changes at around 4450, 4900cm-1 and in the region from 5500 to 7000cm-1. 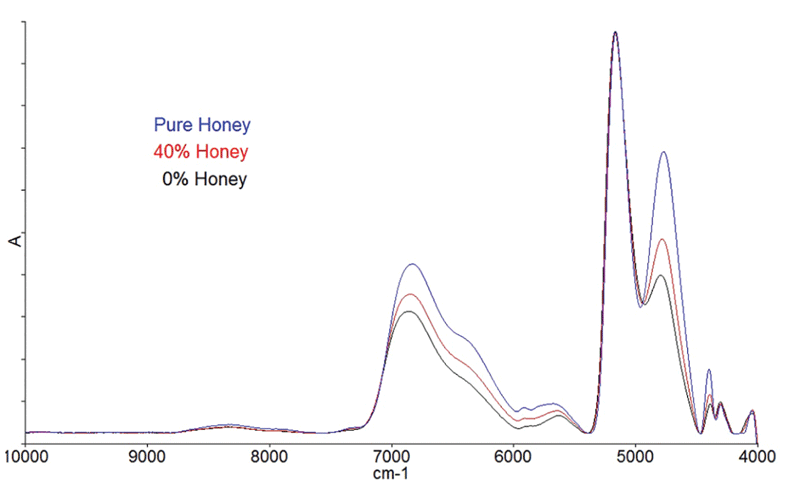 Using these differences a partial least squares (PLS) quantitative model was generated from all the honey/ corn syrup standard mixtures and is shown in figure 2. 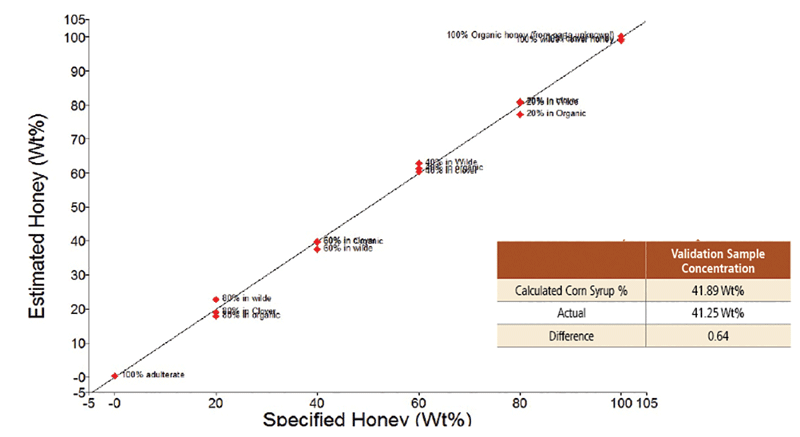 Analysis of Figure 2 shows that the honey type has very little effect on the ability of NIR to be used as a technique to detect corn syrup adulteration. As such, the similar levels of adulteration between different honey types are shown to cluster together and the overall best fit line indicates good agreement between estimated and specified levels of corn syrup. Furthermore, a validation sample was used of 41.25% corn syrup and was identified as 41.89% showing within a 1% agreement.

This model indicated that it could detect a minimum level of about 4% corn syrup in honey with a high degree of certainty. If the adulterant spectra were more different to honey spectra however, it would be certainly able to detect lower levels.

As well as detecting corn syrup adulteration, it is feasible to predict that MIR and/or NIR could be used to confirm the authenticity of high value, single pollen honey such as Manuka honey. In this case using principle component analysis or PCA, the techniques could be utilized to predict the origin and species of the honey quickly and without sample prep. This has been utilized for many different food groups but not as yet used for a wide study of honey.

Food fraud is widespread and honey is not immune. It is possible to use NIR spectroscopy to detect adulteration of honey with corn syrup and can potentially be used to identify honey origin however more work is required in this area. 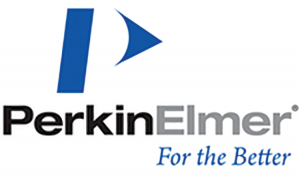 PerkinElmer, Inc., a global leader committed to innovating for a healthier world, has innovative detection, imaging, informatics, and service capabilities to help customers and consumers transform data into informed decisions that accelerate insights to better protect our environment, our food supply and the health of our families. The ability to rapidly detect known and unknown contaminants in our food, water, and air or to monitor their quality consistently is an important part of ensuring the health of our environment. In addition, chemicals, advanced materials, and nanomaterials are playing an increasingly important role in our environment. PerkinElmer’s systems and services help scientists understand all these complexities and ensure compliance.

Dr. Robert Packer is the Portfolio Director, IR at PerkinElmer and has worked for the company for over 8 years.  Following an undergraduate degree in Chemistry he then went to Imperial College in London to pursue a PhD in Materials Science specializing in analytical techniques. On completion of his PhD he joined PerkinElmer as an application scientist in their thermal analysis division before moving into product management for both Thermal Analysis and then Infrared Spectroscopy. He then became the segment strategy leader for the food and pharma testing markets across all PerkinElmer product lines. In this role he moved from the UK to Connecticut.